Luis and the Mexican Election One of the goals of Sonic Trace is to find stories that are local to both Los Angeles and Mexico. The recent Mexican presidential election was one such story.

We reached out to Animo South LA High School and found Mr. Heuisler’s history class where the student body has a cultural identity that includes the Mexican states of Durango, Nayarit and Zacatecas, as much as Los Angeles. The legal status of the kids is mixed – some arrived as babies, others as teens – and the LA-born feel no different than a typical teen living in Durango or Zacatecas today. The root reason that these kids are growing up in Los Angeles and not Mexico is the lack of economic opportunities in the country. They are full-blown Angelenos, but their daily lives, legal statuses and identities will always be inextricably linked to their places of origin. 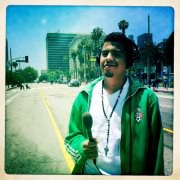 We focus on a young man named Luis for this story.  When the project began he had little interest in Mexico's politics and felt no connection to his town of origin. At the same time, he is one of the more vulnerable. Luis is undocumented. He can't get a driver's license or a formal job in the US. And unlike some of his documented classmates – who travel frequently between the US and Mexico – Luis has only been back once. So would Mexico's election affect him?

You can also listen to Luis' story on PRI's The World.

Sonic Trace is produced by Anayansi Diaz-Cortes and Eric Pearse-Chavez. It is part of Localore and the Association of Independents in Radio (AIR). It's funded by the Corporation for Public Broadcasting.