It's been more than 25 years since NWA released Straight Outta Compton, and band members Ice Cube and Dr. Dre are now making a film about the city and their rise to fame. But Compton's current Mayor hopes they're engaging in ancient history. There's no question that Compton has changed, and we talk with the new Mayor, Aja Brown, after we hear from KCRW's Avishay Artsy, who went to a casting call for the movie. 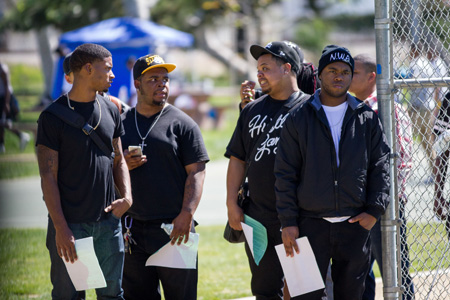 Aspiring actors dressed as members from the rap group NWA await to enter the Rosecrans Recreational Center to audition for roles in the film, Straight Outta Compton, in Gardena, California on March 9, 2014.
Photo by Jose Lopez.

For more photos of the casting call, including dozens of Dr. Dre lookalikes, go to the WWLA blog.