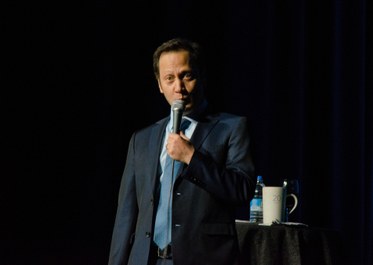 There’s a basic tenet in Hollywood that business is done with OPM: Other People’s Money. Rob Schneider is breaking this rule in a big way.

The Saturday Night live alum (who you may also know as Deuce Bigalow, Male Gigolo or The Hot Chick, among others) has created the new TV show Real Rob.

This time around he doesn’t have to deal with notes from network executives, but his project also has no network funding. Schneider is paying to make the series out of his own pocket and as of yet, he has no distributor.

Schneider plays an exaggerated version of himself and he’s cast his real-life wife and baby daughter in the show, too.