Author Hilary Mantel's historical novels Wolf Hall and Bring Up the Bodies, made her the first woman and first Brit to win two Man Booker prizes.

Both chart the life of English statesman Thomas Cromwell, who rose from humble beginnings to serve as right-hand man to Henry VII. That job was fraught with danger given the intrigue in the king's court and the king's capricious personality.

Here in the States, we're in the throes of Wolf Hall mania. A two-part stage adaptation of Mantel's books just opened on Broadway and this month, a television mini-series that won rave reviews in the UK has its American debut on PBS.

Hilary Mantel had many suitors for the rights to her novels, but the winning pitch ultimately came from producer Colin Callender, a fellow Brit and the former president of HBO Films, where he oversaw award-winning projects like John Adams, Angels in America, and Recount. Now he runs his own production company, Playground.

Mantel and Callender tell us about the process of adapting the books for a miniseries and why television was the right way to go. Callender started thinking about a TV adaptation, the moment he picked up the book Wolf Hall. And Mantel was impressed with Callender's John Adams miniseries and thought he could bring a similar amount of intimate, historical authenticity to an adaptation of her work.

While Mantel's book are works of fiction, they rely on an incredible amount of historical research. All that background information allows Mantel to dive into what she calls the most fascinating aspect of Cromwell: "The unknown portion of the known life." 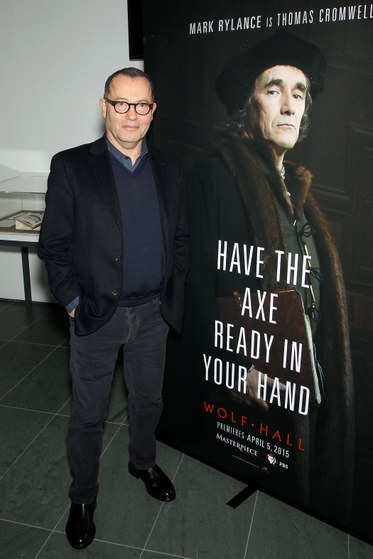 To bring that life to screen, Callender turned to veteran British stage actor Mark Rylance. While Rylance may not look exactly like the real Cromwell, both Mantel and Callender say the energy he brought to the role, and the way he's able to change over time as his character acquires more power, made him the perfect person for the part.

In an effort to stay true to the times, nighttime scenes in the series are lit only by candles or fireplaces. That authenticity, paired with the handheld camera work employed by director Peter Kosminsky, gives a very intimate, personal feel to a large, stately drama.

And how did Mantel feel watching this version her work on screen? "There are places in the series," she said, "that seemed to have been fished straight out of my dreams."

Author Hilary Mantel's historical novels Wolf Hall and Bring Up the Bodies, made her the first woman and first Brit to win two Man Booker prizes.