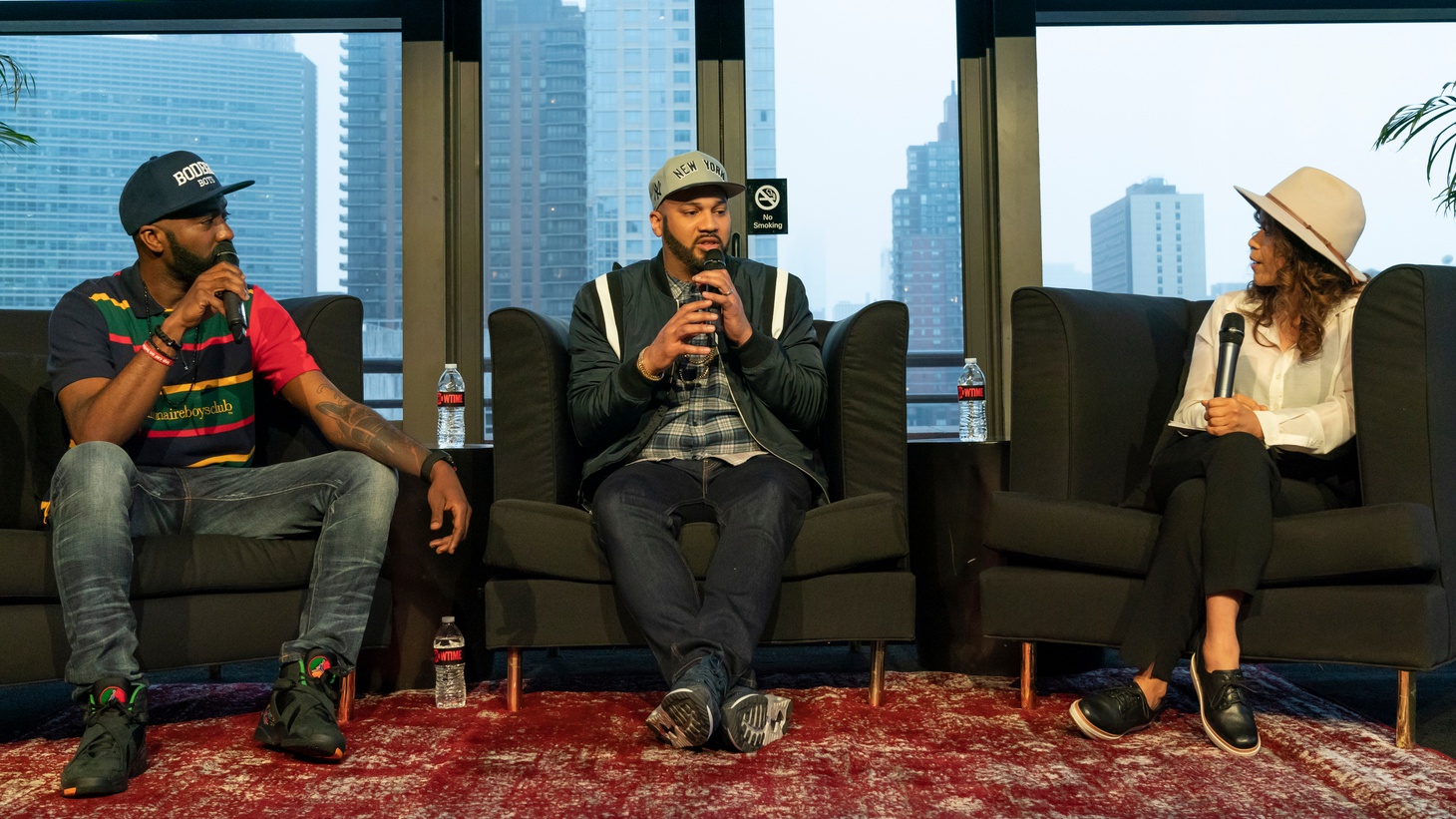 “I watch TV like it's a game film now. I don't watch TV like it's entertainment. I'm reading Variety, Deadline, The Hollywood Reporter, so I keep abreast of all that stuff,” The Kid Mero tells Kim Masters. Desus Nice (left), Mero and Rosie Perez (right) attend the Emmy For Your Consideration conversation at the Stanley H. Kaplan Penthouse in New York, on May 3, 2019. Photo by Shutterstock.

Desus Nice and The Kid Mero are back with their late-night series “Desus & Mero.” In its fourth season, the comedy duo give their own take on the day’s hot topics, eschewing scripted monologues and uncensored conversations with guests intersecting pop culture, sports, music, politics and more. The series includes banter and interviews that range from humorous to informative, with guests like Denzel Washington, Samuel L. Jackson, Wanda Sykes, and Deret Jeter, to name a few.

Before becoming the hosts of the WGA Award-winning series, they covert-tweeted their way out of their day-time jobs with funny comments. Desus turned to Twitter to cope with his occupation at the time.

“It was just like such a soul-crushing office job that I basically turned it into a text version of that show ‘The Office,’” he remembers. “I renamed all my co-workers and gave them pseudonyms, and I would live-tweet every day about what was going on, [and] people could relate to them.”

He continues, “[and I was like], ‘If I'm gonna go through this, let me at least make it funny and tweet about it.’ And going through that lens gave me content for the podcast. So  it kind of worked out for me.”

Mero was working as a Science-aide teacher at a public school in the Bronx when the vice principal found out about his side job. It was 2013 and the New York Times had a front-page story in its Arts and Culture section featuring Mero and discussing his comedy career on Twitter. He was called into the principal’s office.

“I had to make up this elaborate lie about how my manager/creative partner Victor Lopez was banking and tweeting my tweets out throughout the day, so that I wasn't tweeting on company time,” Mero recalls. “[But] I used to go to the bathroom and take like a 20 minute bathroom break… just to keep the engagement up.”

Twitter was the place where they launched their careers with observational tweets, and it also became the training ground to transition their act into a 46-episode, self-titled podcast “Desus vs. Mero” on Complex TV.

“Without being on Twitter for almost a decade, I couldn't have done that. So I'm kind of glad that I tested that earlier on,” Desus, who is currently taking a social-media break for the summer, affirms.

Desus now says at the time he didn’t even know what a podcast was, but his friend Donnie Kwak, who is now a deputy editor at Complex Media, invited them to record an episode.

“I remember playing the test episode for my sister and her friends while we were on the way to a party in the car, and they said to turn it off because their makeup was starting to run because they were laughing so hard. And so it was just like that, and we had gold there,” he recollects.

From there, the duo appeared on several shows on MTV2, and then went to co-host Viceland's “Desus & Mero” talk show until June 2018. That experience was their training ground for linear television.

“I always call it undergrad for the industry because when we got there, we didn't know anything about making TV or doing anything like that,” Mero notes.

That is also where they also learned how to navigate Hollywood.

“It's such a fluid industry. You are working for this company today, [it] might dissolve, [it] might be acquired tomorrow. This platform where your show was on might not exist at the end of the year,” Desus explains. “So you always have to just be ready to change on a moment's notice because Hollywood moves really fast, and I don't think the average person realizes it.”

At Showtime, Desus says they made the right decision moving the show there as “there's a general feel for concern about the content we make and the staff. And you don't generally get that as some of the other networks that we've had.”

And he jokes that they can contact anyone for help: “I could personally call the President David Nevins if I want right now. Would I do that? No, he would not like that.”

The show’s comic style is more relaxed than in the traditional late night space, with unscripted monologues and interviews.

During COVID, however, it took a more informative approach. In one of the episodes, they invited Dr. Antony Fauci, the director of the National Institute of Allergy and Infectious Diseases and the Chief Medical Advisor to President Joe Biden.

“I was in the Bronx during the pandemic… there was so much misinformation about COVID, [and] at the same time the South Bronx was hit so hard,” Desus recalls. “I remember walking my dog and we used to pass the refrigerated trucks by Lincoln Hospital where they had to keep the extra bodies from the mortgage below.”

With that scenario, he thought, “so we have a platform and our audience could benefit from this. That was a no brainer. [And] even if they didn't want to hear Dr. Fauci, [but] they liked the show… hopefully, they learned something.”

Most recently, they had Chris Smalls to talk about unionizing Amazon workers, not an inherently funny segment, “[but] we sit down with him and we banter, [and] funny stuff comes out of it,” Mero quips, “because when you get three guys from similar backgrounds talking about whatever, it ends up being just organically funny.”

After two years of COVID-affected production and shooting from home, Desus and Mero are back in studio. This time, the comedy duo have a showrunner, J.D. Amato, who has streamlined the whole process.

“The show is quicker to make, the staff is happier being there, we're happier, and I think that really comes through in season four. You can definitely kind of feel a difference in energy…a sense of levity that I think comes through on camera,” says Desus.

And, they also have a writer’s room.

“We have some of the best writers right now for what we do because they don't write jokes for us. They put us in situations where they know we can be funny,” he adds.

The fourth season of “Desus & Mero” is now available on Showtime on Thursdays at 11 pm ET.