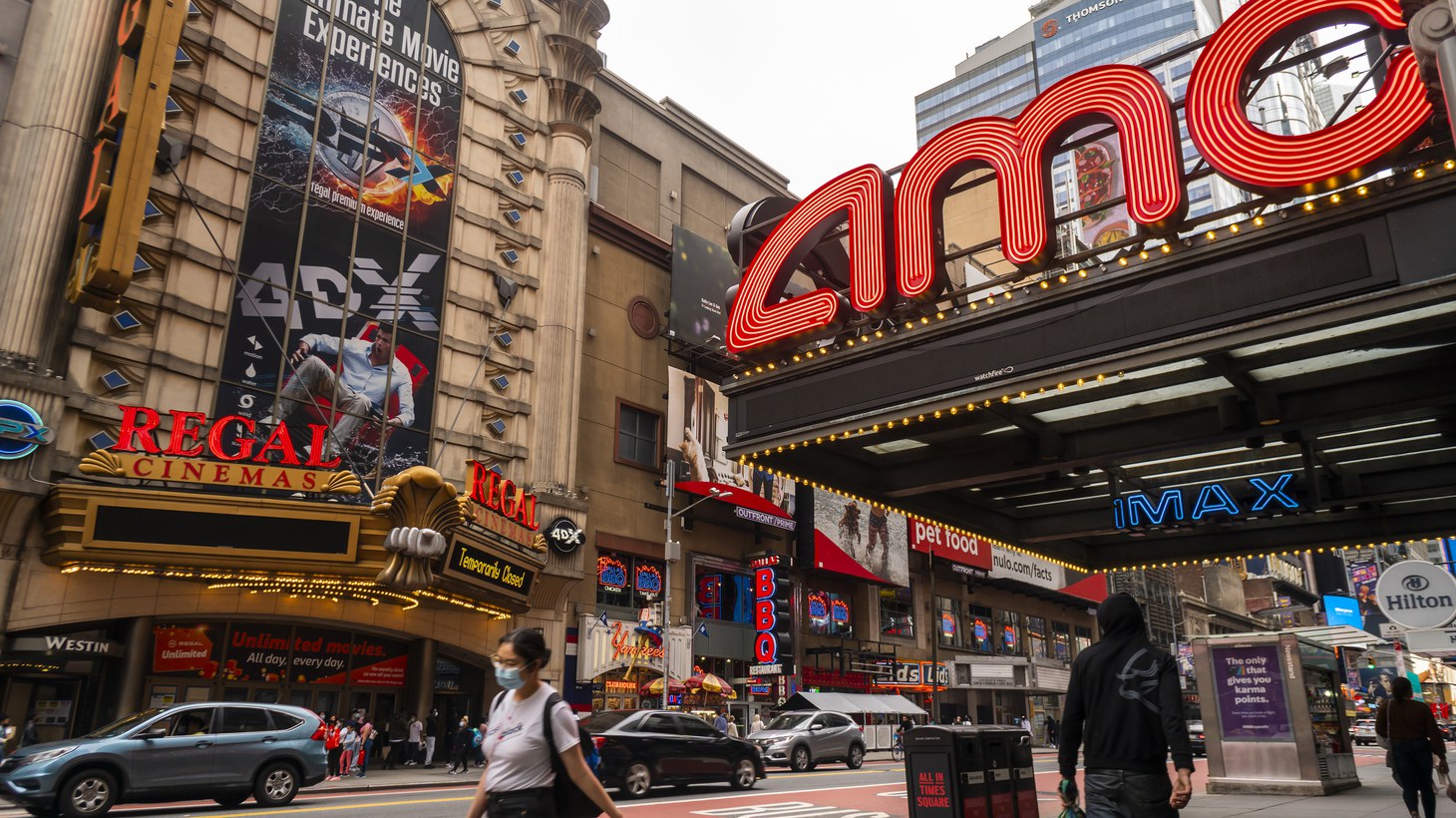 A closed Regal and AMC Empire 25 Cinemas sits vacant in Times Square due to the COVID-19 pandemic on October 24, 2020. Photo by Richard B. Levine/REUTERS.

Two major movie theater chains made some drastic financial decisions over the past week to fend off challenging times for the industry. In an attempt to raise money, AMC Theaters, the world's largest theater owner, issued a preferred share called “APE” on Monday, while its stock plummeted. Meanwhile, the second largest theater company Cineworld, the home of the Regal Cinemas chain in the United States, is contemplating bankruptcy. Guest host Matt Belloni looks into the many challenges movie theaters face right now with Lucas Shaw from Bloomberg.

What's going on in the movie theater world?

Matt: This is a summer we’re calling a movie desert, because there are basically no big releases between early August and mid-October and that's really difficult for these theaters. We're coming out of the pandemic, we see these headlines about “Top Gun,” “Minions,” and “Jurassic World” doing huge business at the box office, and yet we've got these theaters absolutely struggling.

Lucas: The problems really even started before the pandemic. You have these theater chains grappling with declining attendance, the amount of times a year people go to theaters, has continued to decline, [and] it hit an all time low before the pandemic.

They've expanded a lot, opened a lot of new theaters, taken on debt to do so, then the pandemic just shuts down the business for a prolonged period of time. Some of these companies have to raise even more debt to stay afloat.

They’re banking on 2022 as the year where the movie business comes back in full force, and they can start to write their books. And while there have been a handful of big blockbusters, it has obscured what has [been] really going on, which is, the business isn't fully back. Sales are still down, the number of releases is still down. But it's hard to thrive when your business is 30% to 40% smaller than it was just a few years ago.

“A lot of these movies are going directly to streaming.”

Matt: It’s not necessarily a studio problem. The problem here is the product. There's not as many movies coming to theaters. And there are many different reasons. One is this COVID-related production delay, but it's also the streaming world, obviously.

A lot of these movies are going directly to streaming. We saw “Prey”  – a decent size movie [with a] $65 million budget — that movie went directly to Hulu. Disney probably could have put that movie into theaters and made $60, $70, $100 million because it's better than people thought. They chose not to, in part because they wanted to avoid the Fox output deal with HBO. But really, they just want to prop up Hulu, and that's still going on even though we've seen some backtracking on the all-in on streaming over the past few months.

Only home runs are released in theaters

Lucas: Studios have decided that there are certain types of movies – adult dramas, comedies – really anything that costs between $20 million and $80 to $100 million to produce, doesn't belong in theaters, because you then have to spend double that to market it. And you have to, after sharing money with the feeders themselves, gross $200, $300, $400 million on some of those titles to get their money back. They don't think that that's really possible.

They're really only putting that kind of the potential home runs and then the singles, if you will, in the theaters. Horror is like one of the only relatively cheap genres that they still see as theatrically viable.

Netflix shies away from theaters

Lucas: The other factor that is sort of just accepted now: Netflix is one of, if not the single biggest financier of movies operating today and they still don't put their movies in theaters in a major way.

They have this movie, “The Gray Man” that came out in July. By most measurements it was one of the biggest movies of summer, but it was on a few hundred screens and nobody really went to see it there. They have another big movie coming out later this year and the sequel “The Knives Out,” which was a huge hit for theaters last time, and if I had to put money on it, I don't think that's getting a big wide theatrical release.

Matt: That's a big head scratcher to me. That is a theatrical franchise that people went to see in theaters when the first one came out. I don't understand why not put it in theaters around Thanksgiving, get a month's worth of box office and then put it on Netflix.

As we saw with some of these movies like “Encanto,” and some others have done this. It doesn't seem to hurt the streaming numbers that much and then you pick up a couple $100 million dollars in theaters.

Matt: I thought it was an interesting move that Universal is going to put the “Halloween” sequel “Halloween Ends” day-and-date on Peacock via Universal in theaters in October. I thought that would be a theatrical exclusive given that the last two “Halloween” movies have really done huge business and opened to huge numbers. What do you think [is] the rationale?

Lucas: I think they've experimented with that before, and found out that they can make money both ways. Universal is one of the most interesting studios operating right now because they are taking the Netflixes and Amazons out of the equation of the traditional studios they are making and releasing the most movies.

Disney has really scaled back on the number of movies that it puts in theaters. Paramount has really scaled back. Warner Bros., which used to be up there with Universal, has also scaled back a little bit. I think Universal is planning on 20 to 25 movies in theaters every year. Part of that is because they have deals with streaming services like Netflix and Amazon and they're trying to prop up their own service. And they've got this strategy of also selling it at home.

But I'm so curious how that works out not just with the “Halloween” movie, but with a lot of their different titles that are not what is kind of traditionally considered a theatrical movie these days.

Matt: Universal has the weakest streaming service in Peacock, so they really want to send originals there and try to get somebody to be interested in Peacock.