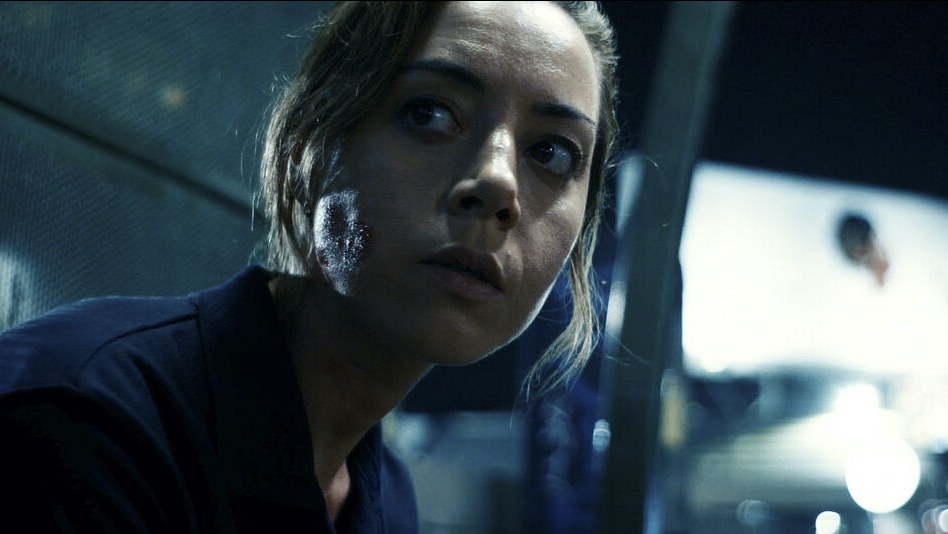 “I just want to make really great films that don't just disappear into the ether, and that people want to see again,” says Aubrey Plaza, who stars in “Emily the Criminal.” Photo courtesy of Roadside Attractions/Vertical Entertainment.

When John Patton Ford was attending the American Film Institute, he made his thesis “Patrol,” a short comedy-drama movie, which received great reviews at the 2010 Sundance Film Festival.

“[It] is the dream if you're a film student,” he recalls. After the festival, he got an agent and a manager and he thought, “All these cool things certainly sounded like what was supposed to happen.” The film also made the short list for the 2011 Academy Awards.

But after having this brush with success, Ford finished film school with some $100,000 in student debt, so his post-school career followed a different path. In order to make ends meet, he took on “some weird part-time gigs,” and he worked in restaurant kitchens, catering services, or whatever he could do.

“I naturally found myself around a lot of people who were very different [from] the people I've been in grad school with,” he recalls. “I got to, in a weird, indirect way, rub up against the strangely inspiring world, and this is what it led to.”

What it led to is his first feature, which took 12-years to make, the student-loan anxiety thriller “Emily the Criminal.” Aubrey Plaza plays the title character, a woman desperate for income after facing a series of dead-end job interviews, and struggling to pay student debt. Emily finds herself in the backroom of a nondescript business where she meets Youcef (Theo Rossi), who introduces her to a shady business of buying goods with stolen credit cards. She gets hooked by the quick cash and illicit thrills, and with Youcef, they devise a plan to take their business to the next level.

Ford had “a real emotional authority”

To make “Emily the Criminal,” the filmmaker drew from his own experience, though he observes he had much more student debt than his fictional character. For the movie he toned it down because, “I thought people wouldn't possibly believe anyone [with] as much debt as I had.”

Plaza was looking for a new project when a colleague handed over her the script for “Emily the Criminal.” “It's a really great example of how you never know who you can meet down the road,” she says. “If you're not open to things, then things won't fall into your lap like that.”

Plaza had found her new project. Her performance as Emiy has been commended as her strongest yet, and for that she won a best actress award at the Annapolis Film Festival. “I love acting and I love challenging myself and doing different roles,” she notes, “I really just love movies.”

Plaza: “I'm sure I helped get that first leg of financing.”

Another aspect of the industry that Plaza loves is producing. “There's something that really gets me going when I feel [that] I can have a real impact on every part of the process,” she says. She is a producer on “Emily the Criminal.”

“Once I discovered that with ‘Ingrid Goes West,’” she says, “and I followed that movie from the very first stages to the very end, my brain just exploded [and] I was like, ‘Oh, man, I want to do this all the time.”

When Plaza read the script, she envisioned “Emily the Criminal” as a $3 million budget film, something larger than she had ever produced before. “I was pretty adamant that I didn't want to make the movie for less because I wanted to do it right,” she recalls. Shooting in Los Angeles is expensive and the story was written like an action-thriller movie, with set pieces and car chase sequences. “That wasn't happening… we couldn't really even get $3 million dollars, which is a great number for an indie film.”

After being connected to Tyler Davidson at Low Spark Films, she was assured that they could shoot it for less. “I was a little hesitant at first,” she says, “but then I was convinced… that they had it under control.”

But Plaza’s artistry and name recognition may have helped as well. “It's hard for me to have perspective on how valuable my name is…[but] I'm sure I helped get that first leg of financing,” she says.

Independent films: “not a good business to make money”

Financing an indie film is challenging because it’s hard to make money off of them. “Emily the Criminal” has grossed just over $2 million since its opening in mid-August.

“I would love to see an example of a real, true independent film that makes a lot of money these days because when you talk about independent films now, the scope is really wide,” she remarks.

“I think people are shocked to find out how much we made the movie for,” says Aubrey Plaza. Plaza and actor Theo Rossi in “Emily the Criminal.” Photo courtesy of Roadside Attractions/Vertical Entertainment.

In the past, she describes, a $2 million-budget film could go to Sundance, become “a real success” and motivate people to make indie films because it was like hitting the jackpot. “That business model doesn't really happen anymore,” she explains. “Maybe I'm jaded, but it has to come from passion because it's not a good business to make money.”

“Emily the Criminal” was made with a very low budget and shot in 21 days.

For Ford, two contributing factors exacerbate the lack of desire to fund an independent movie.

One is that home videos don’t exist anymore, and that “endemically has changed the entire system,” he says. A filmmaker could make an indie film, release in theaters, and if it didn’t make money out of box office sales, it would make back in rentals.

“But now you have streaming services that just pay low prices for things in perpetuity, wholesale. It's a very different market,” he notes, “so things like our movie don't make a lot of financial sense.”

Fear: the reason only big movies are made in Hollywood.

Hollywood makes movies out of fear. “Big movies get made because the executives are scared not to make them, for fear that someone else might make them, or for fear that they'll be held accountable by their superiors for not having acted upon what appears to be a very economic opportunity,” he explains.

In the case of “Emily the Criminal,” Ford says they convinced people they could sell the movie for $1 million more than the proposed budget. “At that point, people start to get scared of saying no, and that, to me, is the primary reason the movie actually got made,” he says. “It became a deal that enough people felt they couldn't quite pass up on.”

Ford explains that Plaza had the idea of taking “Emily the Criminal” to film festivals to see how people reacted to it. “I don't think you could have had a better festival experience in terms of the feedback that we got on the film,” says Plaza. “The reviews were great. People loved it. I think people were surprised by it. It felt really good.”

The other goal was to find a domestic distributor. Plaza says they talked about whether they would try to sell for a traditional theatrical release or not. After the Sundance Film Festival, they received a handful of offers, but not from a streaming service.

“I was shocked about that,” Plaza remarks. “I was like, ‘This is weird. You can't do better than this movie,’ and we're still not getting Amazon, Apple. They're not knocking on the door, but okay.”

After debuting at Sundance, the movie now has a 94% rating on Rotten Tomatoes.

Ford explains that Apple showed up at the film festival willing to spend up to $20 million on one movie, instead of buying five or six movies. “That creates press and that creates conversation,” he says. “This is the move of a company that doesn't really concern themselves with profiting from entertainment, because they have a whole other business.”

For him, it’s a waiting game for big streaming services. “What they [would] rather do is have someone else buy the movie for cheaper, and then the streamers are going to sit back and see how that does. And if it does well, they're going to buy it off of that middleman,” he states.

That’s what happened to them. “We sold the movie to a wonderful distributor, they were committed to theatrical, and the streaming life of the movie will happen later, kind of down the road instead of selling directly to a stream.”

Ford says they now have a deal for streaming the film, and for that, he feels victorious. “It's a win,” he quips. “I think given the situation, given the context, I think this was a miracle for me to end up like this.” “Emily the Criminal'' is playing in theaters, and will soon be available to stream.

Despite the film’s success, Ford says it hasn’t been a straightforward path. “It's been an exciting time, but confusing as well trying to figure out exactly what to do [next],” he says. “I have to make a living and that only makes it more complicated.” And it gets trickier because there isn’t instruction or people who can give advice, unless they are investing on the project, “but those are problems that I feel grateful to have,” he adds.

And, after a myriad of impressive acting roles, Plaza, who also stars on “The White Lotus” season 2, premiering on HBO in October, says she’s ready to direct.

“I just want to keep being inspired and work with people that I really believe in, and that I love collaborating with,” she says. “It's just back to the drawing board, find another script, either write it myself or find it, but I just want to make good movies, really.”

Disney’s CEO Bob Chapek undertakes an image reboot during a rebranding campaign tour at the D23 Expo after a rough tenure.