Lynn Shelton’s films typically have been indies featuring just a few youngish and slightly adrift men and women who talk a lot. Their conversations feel natural and improvised, because often, they are.

When Shelton sat down to talk with us about her career, she said she had not originally set out to make movies. She earned a masters degree in photography and before that, she studied acting in college. Eventually she transitioned from off of the stage to behind a camera, where she started making short experimental documentaries.

One of those documentaries caught the attention of The Film Company, a unique non-profit studio in Seattle. They gave Shelton the funding, crew and equipment to make another movie about anything she wanted. The result was the 2006 narrative feature We Go Way Back. Later, she collaborated with Mark Duplass for Humpday and Your Sister’s Sister, both of which had heavily improvised dialogue.

With her newest film Laggies, Shelton took a more structured approach. It’s the first film she’s made that she didn’t write herself--Andrea Seigel wrote the screenplay. Still, as in her earlier movies, the focus of Laggies is a relationship. 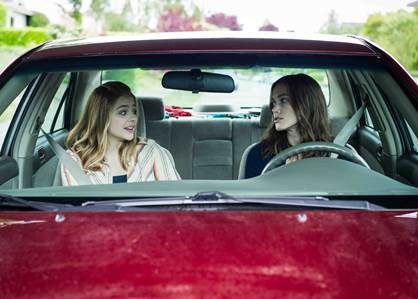 In this case, an oddball friendship that forms when Keira Knightley as an overeducated but underachieving 28-year-old starts hanging out with a 16 year old high school student played by Chloe Grace Moretz.

Laggies gives Shelton the chance to bring her layered characters and quirky on-screen relationships to a more mainstream audience, a change, she tells us, she’s happy to embrace.

Lynn Shelton’s films typically have been indies featuring just a few youngish and slightly adrift men and women who talk a lot. Their conversations feel natural and...