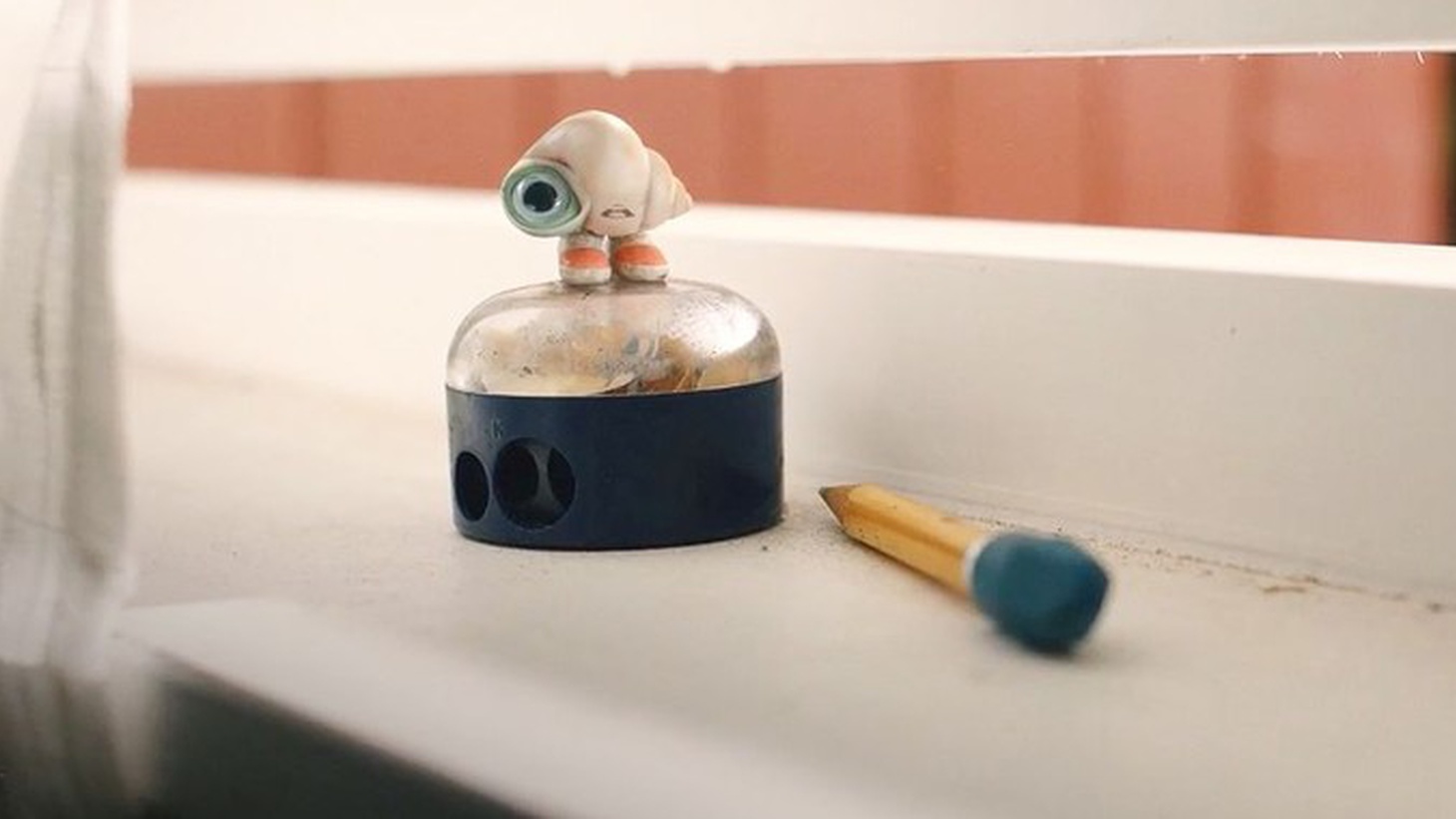 For the film, director Dean Fleischer-Camp wondered “how do we embrace the inherent wonkiness of stop motion, and also give [Marcel] more articulation and allow him to do things that I wouldn't have been able to animate, and [which] he wasn't able to do in the shorts because he was literally super glued together and had no joints?” Photo courtesy of A24 Films.

This A24 film adaptation chronicles the story of Marcel (voiced by Slate), a one-inch-tall seashell who wears pink shoes and has one plastic eye. He lives with his grandmother Connie (Rossellini) and their pet lint, Alan. They are the sole survivors of a sprawling community of shells that disappeared in a mysterious tragedy until a documentary filmmaker discovers them amongst the clutter of his Airbnb. He then films them and posts Marcel’s story online. Marcel hopes to find his long-lost family, and embarks on an adventure.

Talking in “this little voice”

Before Marcel became a character and an online sensation, it was a voice. Slate and Fleischer-Camp went to a friend's wedding and shared a hotel room with at least four other people. Over the course of that weekend, Slate remembers that being in close quarters inspired her to start “talking in this little voice.” As a comedian, she was trying to do every voice she possibly could. She recalls, “it was very exciting to find out that there was one that I had not yet done.”

And from that combination of “being fussy and feeling squished,” Slate says she started saying in that little voice things like “I feel like someone's gonna step on my head,” and “you guys really need to tidy up.”

Slate’s new-found voice made an impression on Fleischer-Camp, and once they got home from the wedding, he remembered to have agreed to make a video for a friend’s stand-up comedy show. It was just days away, so he quickly thought of asking Slate if he could interview her doing that voice, with the idea of creating a character around it for a short film.

He says he recorded Slate, went to a craft store, bought a number of supplies and started putting a character together, hoping something would stick. “I got to work,” he remembers, and created “a bunch of tiny little goblin, terrible versions of Marcel, until I finally landed on the design that we have, which I think [is] very handsome.”

When Slate saw the characters on the kitchen table, “it was so obviously [Marcel],” she asserts. “That's when I knew what I looked like.”

“I was so touched by Marcel's unique handsomeness and wanted to say exactly what I looked like as him,” says actor Jenny Slate. “I love how straightforward he was from the start.” Image courtesy of A24. 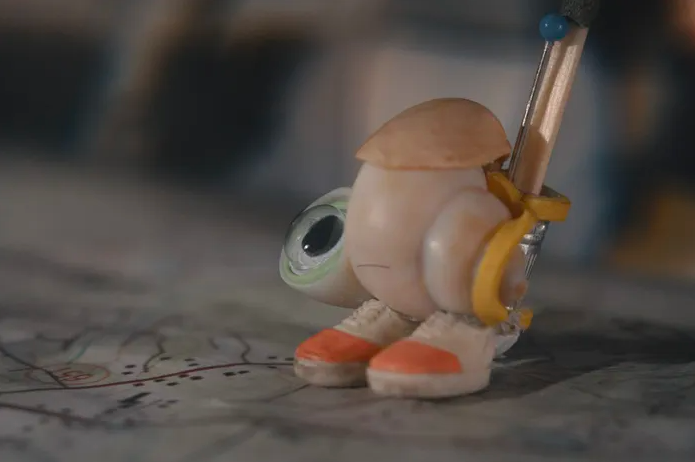 “I was so touched by Marcel's unique handsomeness and wanted to say exactly what I looked like as him,” says actor Jenny Slate. “I love how straightforward he was from the start.” Image courtesy of A24.

“My name is Marcel”

Recently Fleischer-Camp found the original audio clip where Slate says the character’s name for the first time. He remembers pestering her to come up with a name while in character. When she stated, “‘My name is Marcel’,” in that little voice, he quipped, “‘Your name is Marcel and you're also a shell!? Is that a coincidence?’”

In 2010, the then-married couple debuted the short film “Marcel the Shell with Shoes On” on YouTube. The film was shot and produced in their apartment in two days, and it went viral. To date, it has amassed more than 32 million online views.

After the first movie, the duo started perfecting the talking character by thinking of Marcel jokes, or having a conversation about it until it felt right to make a second one.

“Every time we would make a new short, it would build a little bit more [on] what he was capable of as a character,” Slate affirms. “By the third one, [Marcel] is really capable of having a full past even though we don't know what it is. He's more than just a sort of talking bumper sticker.” The online sensation also became a children’s book.

From online to the big screen

From the three shorts, Slate and Fleischer-Camp ended up having a lot of written material that didn’t make the cut, including some feature scenes. Seven years after the third online movie, they decided to take Marcel to the big screen, but under the right circumstances.

It was important for them to keep Marcel’s online qualities. Fleischer-Camp wanted to find a film partner that understood how “the things that we loved about Marcel weren't necessarily the things that made him a great fit for a tentpole franchise,” he says, and that included over commercialization of the character.

And they also wanted to work with a studio that respected their improvisational production approach, which “would not have been possible with another actor or performer because Jenny is able to stay in character as Marcel basically all the time,” Fleischer-Camp explains. That meant recording her anywhere, which wouldn’t work in a regular voiceover recording setup. They also mixed traditional writing with improvisation in order to make Marcel sound authentic and get the most out of his character.

A24 is distributing “Marcel the Shell with Shoes On,” and the non-profit Cinereach has financed it. 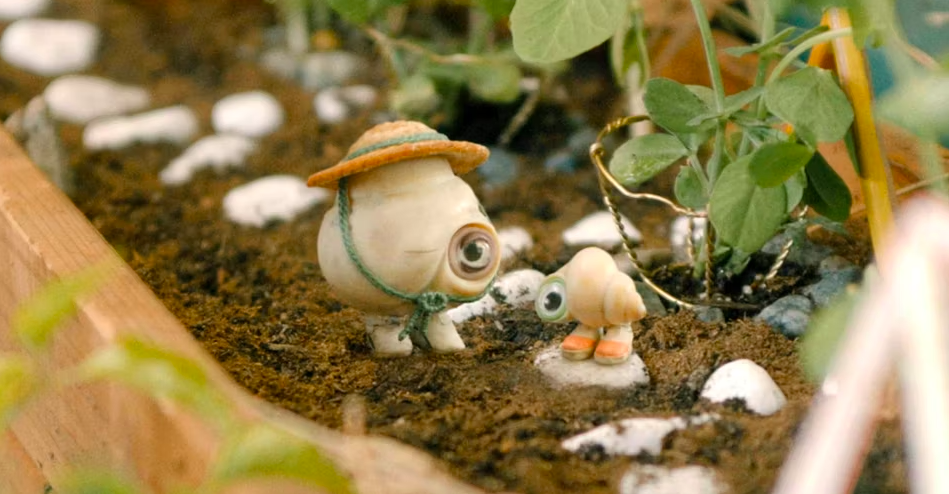 “And what we really loved about him was that he was a real individual, and he had depth and complexity,” says Dean Fleischer-Camp. “And I wanted to honor that and make a documentary portrait that treated its subject with dignity.” Photo courtesy of A24.

Where does “Marcel the Shell” go from here?

While the movie has received a 100% rating on Rotten Tomatoes, Fleischer-Camp says they would consider making another one if there's a market for it and “people are willing to give us money.”

For now, audiences can see “Marcel the Shell with Shoes On” in Los Angeles and New York theaters. It debuts across the country on July 15.