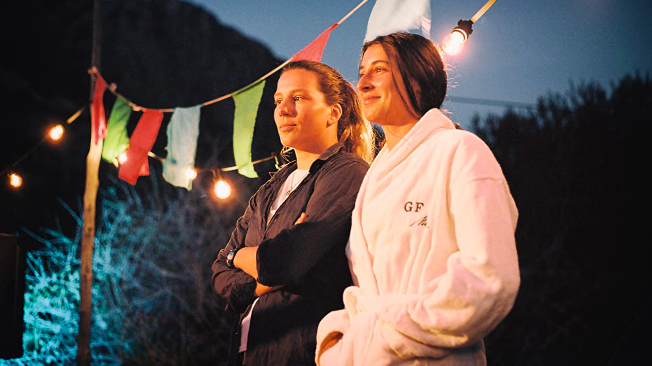 “There was no script, there was just an idea and a paper, which was not much more than a letter of intention,” says “Murina” director Antoneta Alamat Kusijanovic. “And that's how it got financed.” Kusijanovic (left) with actor Gracija Filipovic on the movie set. Photo by Maja Medic.

Filmmaker Antoneta Alamat Kusijanovic’s debut feature “Murina” won best first film at Cannes last year. Though it may seem like a story of instant success, the Croatian director says she spent years educating and establishing herself.

When something happens “out of the blue and overnight, it's actually ten years of work behind it,” she explains.

Kusijanovic had worked at different film companies and affirms those connections helped her finance the 2017 short film “Into the Blue.” The path to fund “Murina,'' she says, seemed easier, as she presented RT Features with only a letter of intent.

“Everybody already knew me, how I am in business, so I was already familiar to all of these people that were involved in the project,” she says.

Now, Kusijanovic discusses her love for theater and the path that took her to co-writing and directing the coming-of-age drama “Murina.”