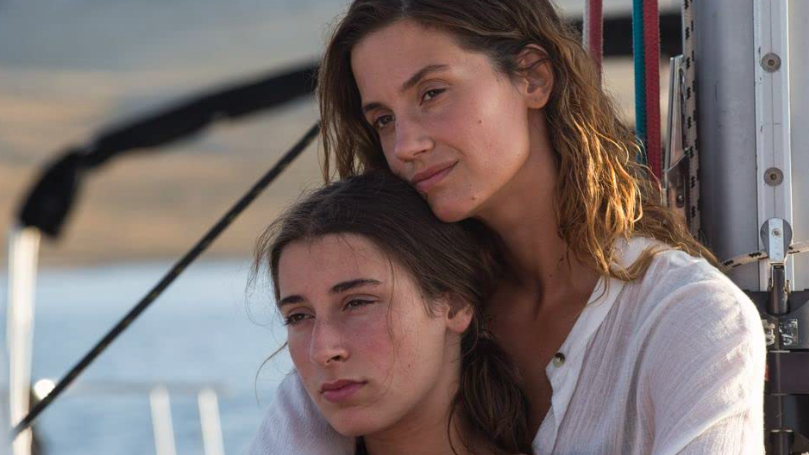 Antoneta Alamat Kusijanovic spent years educating and establishing herself in the film industry. Last year, the producer, writer, and director debuted her first feature film “Murina.” It’s a coming-of-age family drama that explores the unhappy home life of rebellious 17-year-old Julija (Gracija Filipovic), who is caught between her overbearing father, Ante (Leon Lucev), and her weak-willed mother, Nela (Danica Curcic). The teenager feels trapped in the fishing village where she lives, but finds freedom in swimming and diving in the idyllic blue Adriatic sea waters of Croatia. A visit from her father’s old friend Javier (Cliff Curtis) only exacerbates already simmering tensions among them.

The life of theater

Before becoming an award-winning director, Kusijanovic’s first passion was with drama. At age of six, she started acting in a local, professional theater in Dubrovnik, Croatia, though her mom started taking her to the theater at the age of four.

She remembers “vividly speaking to actors,” and how fascinated she was by how they transformed on stage. “I love the life of theater,” she says. She never thought, however, of pursuing a career in acting, so she ended up getting a Masters degree in production from the Academy of Dramatic Arts in Zagreb.

While in school she worked with theater production, management, and line producing, but part of her education involved studying film.

When she was seven years old, Kusijanovic witnessed a horrific car explosion. Her father took the family on a field trip to get a Christmas tree. As they were driving on this narrow-windy road in Dubrovnik near a hill, a car came from the opposite direction. Her father’s car went off the road by just a few inches to let the opposite car get through, but the other car ended up driving over an anti-tank mine and exploding. The mine had likely been planted on the road during the Croatia War of Independence between 1991-1995.

“It was a very inexplicable experience,” she recalls, adding that “people who [say they] learn from trauma are lying to themselves, and people who accept that they went through trauma are actually healed. I don't know if that's true.”

Years later, she made a short movie called “Christmas Tree” about this event. “It was a very big production, because I actually blew up the car and dug the ground and asphalt to really be honest to the experience,” she says. “But I never finished it. I didn't want to distribute that film for some reason.”

While making this film, she cast Gracija Filipovic to play the part of one of the passengers in the car that exploded. Filipovic was in the film “for exactly five seconds,” but left a big impression on Kusijanovic, who would be reunited with the young actress a few years later. 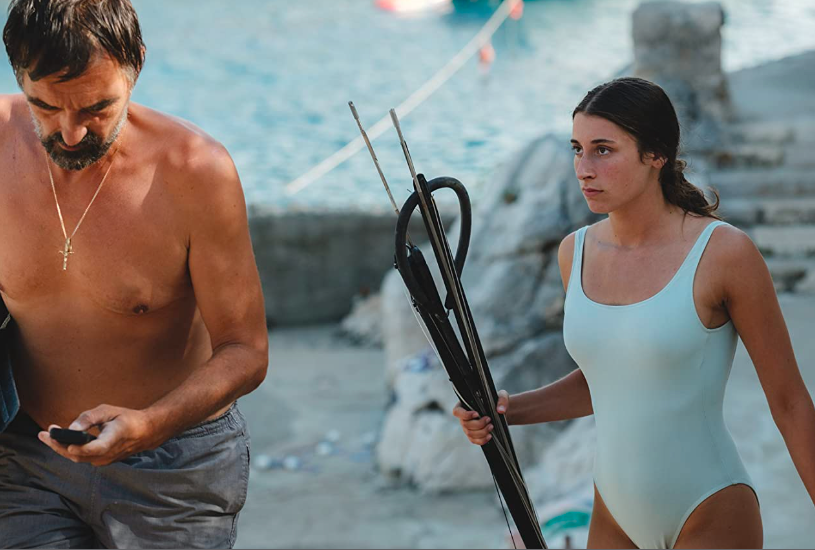 “The way the environment is around people really defines the way people are also in their movement, and psychology, intention,” says director Antoneta Alamat Kusijanovic. Leon Lucev and Gracija Filipovic star in “Murina.” Photo by Mario Topic.

Once Kusijanovic finished her education in Croatia, she moved to New York. There she ended up getting a film internship, but quickly realized that was not what she wanted to do, so for about two months, she got a job at a construction company working in project management. She recalls that the money was great, but it was a battle between the unionized employees and the company that really grabbed her interest.

She remembers the employees putting coffins out in front of the construction company’s buildings and pretending that they were dead. “It was very theatrical and I thought, ‘This is a great subject. I want to record this. I want to remember this… and I want to make a documentary about this,’” she explains. She started filming it, “and that's how I became a director, I think!”

She made a short film, but never shared it with the general public. However, Kusijanovic showed it to one of her friends, Dylan Leiner, the executive vice president of acquisitions and production at Sony Pictures Classics, who thought she “should really direct.” Kusijanovic said she wanted to give it a try and after meeting some Columbia University alumni, she enrolled in its Master of Fine Arts in Directing/Screenwriting program.

While attending film school in New York, Kusijanovic wrote and directed the short “Into the Blue.” As the setting, she picked the coastal region Croatia to tell the story of 13-year-old Julija and her mother. They flee their abusive household and find refuge on an idyllic island in the Adriatic sea.

The student-filmmaker hit the road to make the film, which was expensive. “Even though it looks very simple, to have the kids on the rocks is complicated for safety, so that was a very big production,” she recalls.

She then put a general casting call for actors who were trained swimmers. Filipovic, who is a competitive swimmer, auditioned for the part, and the two collaborated once again.

“She was just perfect. She already had a little bit of theater experience. She was striking. She was hard working. And she had to speak very little to express what she [felt] inside,” says Kusijanovic.

“Into the Blue'' won awards at the 67th Berlin International Film Festival, and others, and was nominated for a Student Academy Award.

After working with Filipovic for a second time, the Croatian filmmaker decided to write “Murina” specifically for the young actress.

But filming it proved to be a difficult undertaking. “Murina” was shot on three different islands in coastal Croatia. The islands are about nine hours away from each other, making the production even more labor intensive. Kusijanovic, however, was determined that it was an “absolutely necessary” tool to tell this story.

“I didn't want to have trees that are green in the nature that I'm depicting. I really wanted to have bare stones and rocks, and I wanted the house to feel the same,” she explains.

She found a 16th-century house on an island without the lush green. It was surrounded by olive trees, which she says, “are kind of gray and silver. The way the environment around people really defines the way people are in their movement, psychology, intention.” 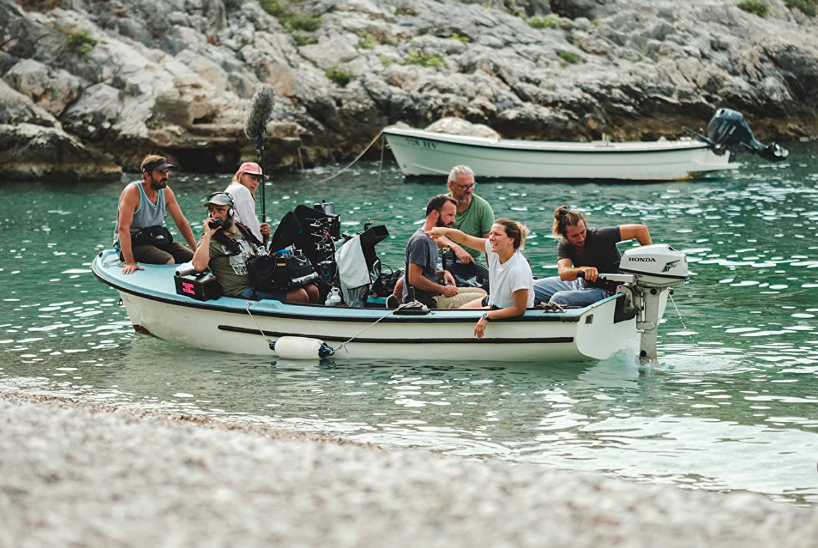 “I set myself in a worse location, at three different islands and they're like approximately nine hours away from each other…[but] it was absolutely necessary to do that,” explains director Antoneta Alamat Kusijanovic. Photo by Mario Topic.

One of the islands was selected to shoot just for the underwater scenes. Because the filmmaker had scouted that area for “Into the Blue,” she knew it would be less risky to film there.

“To shoot underwater, in a natural environment, not in a pool, you really need to know not only the way it looks underwater, but you also need to know kind of the weather of that underwater, which is hard to detect and very expensive,” she explains. “There can be a mixing of cold and hot currents and then it's completely foggy and you cannot see anything.”

To get the best underwater footage for “Murina,” Kusijanovic needed help, and she was able to recruit and count on the expertise of the French cinematographer Hélène Louvart, who worked on “The Lost Daughter.”

“Hélène was the most beautiful, gentle, kind, visionary, collaborator doula. I could not imagine a better person to do this film,” she says.

Filming underwater wasn’t the only challenge. They also had a complicated script to work with because “almost everything is told through the point of view of the girl, but you have four people constantly in the scene together, on the sea, under the sea, by the sea, in bathing suits,” Kusijanovic observes. “[It was] a nightmare to shoot – in the sun without a shade, complicated mise-en-scène, no cover sets.”

So, it took Kusijanovic some drafts to reach the “best possible version visually,” after “combining all the elements” and working with the creative team. 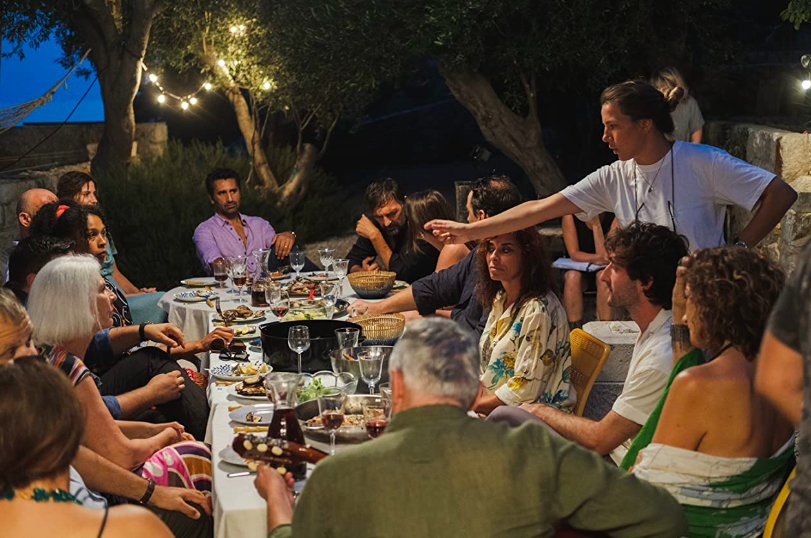 "And the way I like to speak and paint with the camera was also not as simple at first, and took us some drafts to get to the nutshell,” says director Antoneta Alamat Kusijanovic. Photo by Mario Topic.

Kusijanovic also got Martin Scorsese involved in the  production and he became one of the film’s executive producers. The veteran director had a working relationship with RT Features to support first and second time filmmakers, and “Murina” was picked up to be part of that collaboration.

During post-production, he watched several of the cuts, but, “he didn't have many notes. He would say, ‘You know, what is best in the film because you've spent the most time with it. You know it better than anyone else watching it right now,’” she remarks.

“Murina” won the Camera d’Or for best first feature film at the 74th Cannes Film Festival in 2021. Kusijanovic was pregnant during that experience and reflects on the prize.

“I really felt like that's the ultimate creation. I was able to make a film, but I was really like, ‘Okay, I'm giving life, and this is the best experience I could have while I am delivering my film to the world,’” she says.

However, the film was not nominated for an Oscar, which she thinks “was a little bit strange” but decided not to dwell much on why that happened, though she believes “it was a little bit of a missed opportunity for my country.” The film has won three other awards and received several nominations.

“Murina” has a limited release in theaters now, distributed by Kino Lorber.