The Wolfpack tells the story of six brothers who were rarely permitted to leave their family's apartment in government-subsidized housing on New York's Lower East Side. The children were home-schooled by a loving mother, but kept inside by a domineering father who told them to fear the outside world. However, he also introduced them to movies.

Govinda Angulo is one of those brothers featured in The Wolfpack, and Crystal Moselle is the director of the film. Both are our guests on this episode. 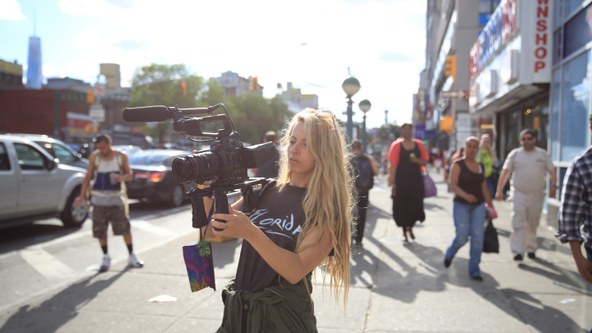 Director Crystal Moselle on the set of "The Wolfpack"
Photo by Megan Delaney, courtesy of Magnolia Pictures

Angulo told us how he and his brothers watched whatever films they could get their hands on and eventually started reenacting scenes from some of their favorites -- writing out entire scripts by hand and creating elaborate sets and costumes. Quentin Tarantino's films, especially, lent themselves to reenactments because of the large casts of male characters. Angulo said the cartoonish violence also served as a kind of catharsis.

As the older boys reached adolescence, the power dynamic in the apartment shifted, and the brothers slowly began venturing outside, at first mostly around their own neighborhood. That's where filmmaker Crystal Moselle first saw the brothers, walking in the Lower East Side, six-abreast, with matching sunglasses and long black hair. She instinctively ran after them, and from that first encounter, a friendship was born, built on a shared love of cinema.

The brothers weren't ready to share their entire backstory right away, but over the following months and years, Moselle started filming more of the Angulo family, slowly doing interviews and gathering material the boys filmed themselves. Once she had a producer and editor on board, Moselle was on her way to making a real documentary. Months later, when she called Govinda Angulo to tell him The Wolfpack had been accepted at Sundance, he initially thought she was joking.

Today, the Angulo brothers spend plenty of time outside their apartment. They all went to Sundance and have traveled the country promoting their film. The older brothers, including 22-year-old Govinda Angulo, have started building filmmaking careers of their own. He recently got his own apartment and made a short film for Vice.com.

'The Wolfpack' Steps Out of New York for Sundance and Beyond