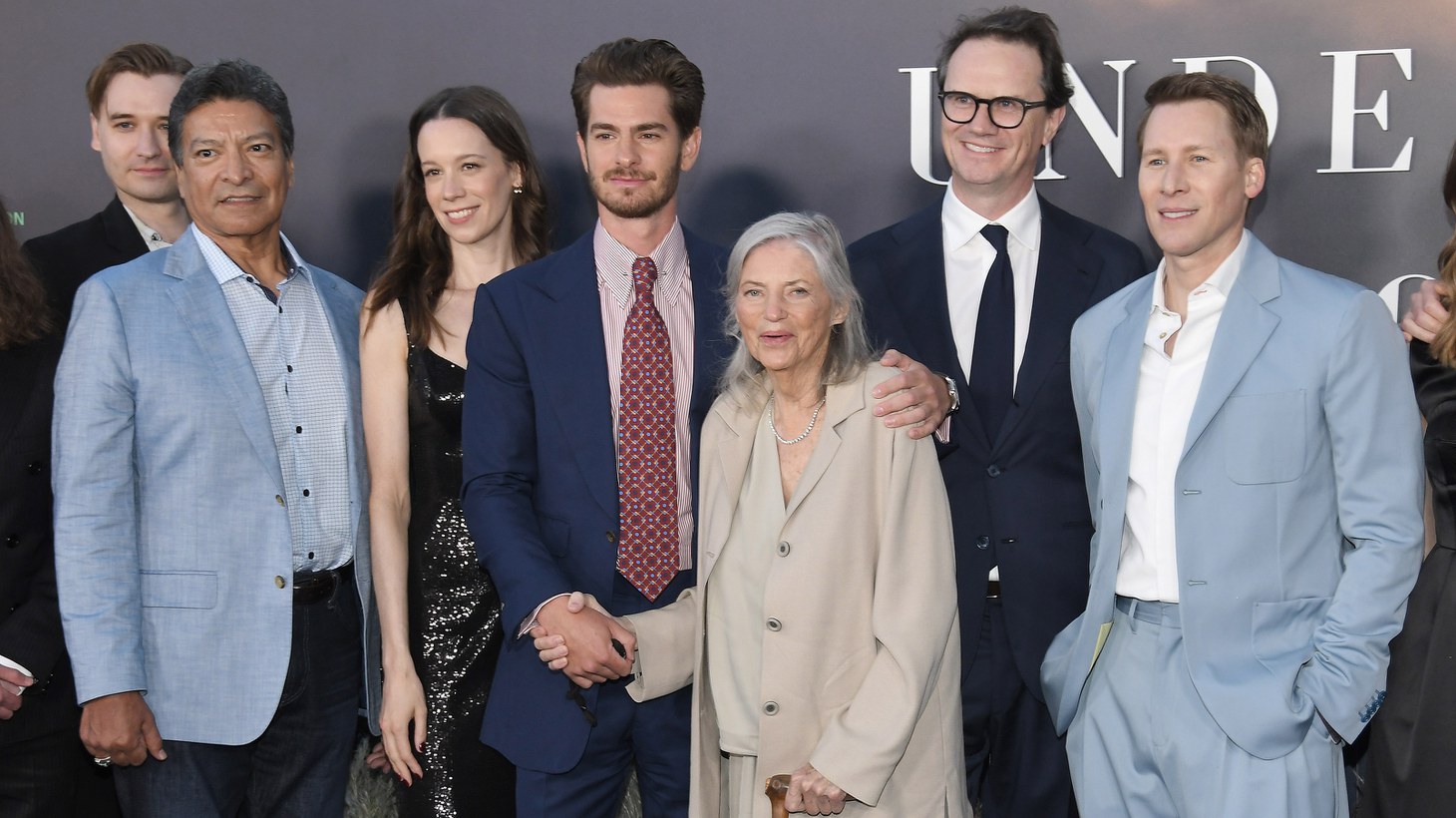 “I always knew that in order for this show to succeed in the way I'd hoped, it had to live in a genre that made it compelling that felt like a hook,” says Dustin Lance Black. Black stands with (R) the cast of FX’s “Under the Banner of Heaven” premiere: (L-R) Seth Numrich, Gil Birmingham, Chloe Pirrie, Andrew Garfield, Sandra Seacat, Peter Rice at the Hollywood Athletic Club in Los Angeles on April 20, 2022. Photo by Sthanlee B. Mirador/Sipa USA/REUTERS.

Krakauer's book focuses in part on the investigation of the 1984 brutal murders of Brenda Lafferty and her infant daughter Erika, and it dives into the history and evolution of the Mormom religion. After it was published, the Church of Jesus Christ of Latter-day Saints called it “a full frontal assault on the veracity of the modern church.”

In Black’s screen rendition, he introduces Jeb Pyre, a fictional police detective, family man, and devout Mormon in the also made-up city of East Rockwell, Utah. Pyre, played by Andrew Garfield, is assigned to investigate the real-life Laferty killings, which were committed by two of Brenda’s brothers-in-laws who claimed they were acting on divine guidance. During the investigation, Pyre’s own faith is tested as the slayings are seemingly connected to an esteemed Utah family, and spiral into their distrust in the government and LDS fundamentalism.

Black and the Mormon Church

Black believes he was well-suited to make “Under the Banner of Heaven.” He grew up in the church and witnessed how it handled his mom’s abuse.

“I saw my mother being abused [and] the church preferring she lean on church authority, as opposed to police authority, and that really didn't resolve things because, it's the woman's place in Mormon home to create a home suitable to her priesthood holder [or] the father in the home,” he remarks.

And adds, “but the thing that's most disturbing about having witnessed that is how unremarkable it was. It was not just her. My mother was the president of the Relief Society in our area, which is the women's group in the church, and I was keenly aware that our story was not special.”

Before leaving LDS, however, he was “very attached” to it.

“I was devout. I didn't know any different. It's how the design of the church is. I was six days a week in church, which I enjoyed, whether that's Sunday school, or Boy Scouts. It was all Mormon, and it's all I knew,” he says. “And it felt very safe. So leaving the church was not something I wanted to do, [but] I followed my mother out as a teenager.”

This isn’t Black’s first time depicting the Momon church in which he was raised. He has credits on multiple seasons of HBO’s “Big Love,” which ran from 2006 to 2011.

His process in making the series

The more he dug into the story, Black says, the more he felt compelled to make the series scary.

“I always knew that in order for this show to succeed in the way I'd hoped, it had to live in a genre that made it compelling that felt like a hook,” he explains. “It’s not just that it's a true story. It's a true crime thriller that feels like horror, and that’s by design.”

And what inspired him were the slasher movies of the 80s.

Black initially pitched “Under the Banner of Heaven” as a movie project to Ron Howard and Brian Grazer at Imagine Entertainment. But it didn’t work that way.

“That was a painful time. I would think that I'd cracked it, but the script would be 160-180 pages long. No one's making a drama that length,” he recalls. “So I read and they weren't good, and I couldn't do what I needed to do with the room that [Howard and Grazer] gave.”

But he learned from that experience.

“[A writer’s] job is 90% failure, if you're doing it right. We’re the people who set this whole thing in motion, hopefully, that's the goal,” he says. “And you want to make all those mistakes, you want to fail early on. That's the test of fire.”

And his advice for other writers is to embrace failure.

“I encourage writers to be daring enough to fail and admit you failed and normalize failing because you only need to get it right once and it doesn't have to be the first time that's why we have multiple drafts,” he observes.

The Academy Awards and LGBTQ+ Advocacy

Early in his career, Black won an Academy Awards for the Best Original Screenplay of “Milk” in 2009. During his Oscars’ speech, he promised the LGBTQ+ community would have federal equal rights protections.

“But the thing that wasn't in the timeline was my mother. My good Mormon, conservative mom reminding me [that] I had made a promise up there, and that that's a sacred thing. So I knew I needed to fulfill that promise,” Black says.

But it was political strategist and LGBTQ+ rights advocate Chad Griffin who told Black he had to pick either writing or advocacy. “I picked marriage equality,” he says.

In 2009 he became a founding board member of the American Foundation for Equal Rights until 2015 when the United States Supreme Court in a landmark 5-4 decision guaranteed equal recognition under the law, making same-sex marriage legal in all 50 states. And then, in 2017, Black created ABC’s mini-series drama “When We Rise,” based on Cleve Jones’ book for which the series is named. The series was a historical dramatization of LGBTQ+ rights fight in San Francisco from 1972 to 2015.