As ‘Black Panther’ roars at the worldwide box office, we spent a recent evening watching the movie in LA’s Koreatown. The film has a 97% fresh rating on Rotten Tomatoes, so it’s not surprising that our fellow theater-goers loved it.

“Here” is CGV Cinemas, the first U.S. Branch of a huge South Korean movie theater chain, and one of three places in this country where you can watch ‘Black Panther’ in a special format called ScreenX. The other two American ScreenX theaters are in Orange County and Las Vegas. 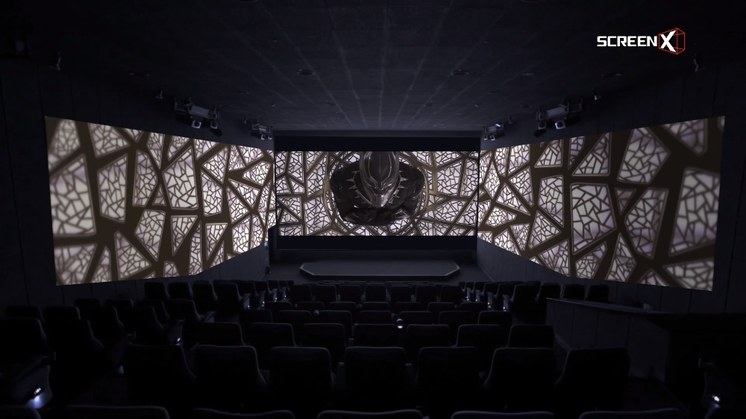 Paul Kim, head of studio relations and production for ScreenX describes it this way: “Imagine you’re watching a movie in a normal movie theater, but at certain parts of the film, the entire wall of the theater turns into a big screen so you’re completely surrounded by imagery. 270 degrees. It’s almost as if you’re sitting right in the middle of the action.”

While most ScreenX theaters are in South Korea and China, the company is trying to make inroads in Hollywood and convert more big American studio movies into the format. So far, it’s done five--with ‘Black Panther’ being the first Marvel film--and the first breakout hit--to get the ScreenX treatment.

Seeing a movie in ScreenX comes at a price, of course. Kim says in most places, it’s comparable to the price of watching a movie a 3D. Our quick check shows it may be a bit more or a bit less, depending on where you are. In LA and Orange County, ScreenX adds 4 dollars to the ticket price--taking the total to $18.25. In Las Vegas, it’s a 3 dollar surcharge.

Kim is well aware of the challenges facing theater owners right now--including streaming services like Netflix and the decline of 3D sales. ScreenX is part of a larger South Korean company called CJ Group that owns movie theaters and other exhibitor technology like 4DX, where seats actually move. Kim hopes technology like ScreenX will encourage more people to make a trip out to the theater.

Back in Koreatown, there were mixed reactions to the ScreenX format. Some people we spoke to loved it, others thought it was OK, but said they wouldn’t pay extra to see a movie in 270 degrees.

NERDSoul’s Michael Young is keeping an open mind. “You know, it’s a gimmick,” he said, “But it’s not a bad gimmick. It’s pretty cool.”

‘Black Panther’ is playing now, in ScreenX and other formats, for weeks to come.

One final Oscars check-in before the winners are revealed. It’s a strange year because all the best and supporting actor and actress categories feel locked, but the best...

As ‘Black Panther’ roars at the worldwide box office, we spent a recent evening watching the movie in LA’s Koreatown. The film has a 97% fresh rating on Rotten Tomatoes, so...

With ‘Black Panther’ set to cross a billion dollars at the worldwide box office, we thought now would be the perfect time to revisit a talk with director Ryan Coogler we...