Dan Harmon was infamously fired by NBC after season three of the show he created, Community. Then, inexplicably, they asked him to come back for season five. "It's a peaceful time right now," he told Elvis Mitchell in front of a crowd of about 90 guests at this live taping of The Treatment. Harmon admittedly grew up not only with an aversion to authority, but also a massive chip on his shoulder -- and no one is more aware of it than he is. To help channel his anger, Harmon creates. His new animated show for Adult Swim, Rick and Morty, was just renewed for a second season. He also hosts the podcast Harmontown, recording it live every Sunday at the NerdMelt Theater. And he created Channel 101, which he calls "punk rock television," a group of TV creators who are constantly experimenting with TV tropes, finding out what works and what doesn't without a studio acting as the middle man between creator and audience. 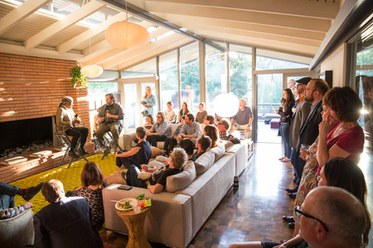