THIS EPISODE CONTAINS SPOILERS: Seven years ago, David Benioff called D.B. Weiss after reading George R.R. Martin's A Song of Fire and Ice series, and said, "I might be crazy but I'm reading this book and I think it's the best thing I ever read." Now, Game of Thrones is one of the most popular and critically acclaimed shows on television, already in its third season and in pre-production for a fourth. In this interview, recorded live as part of KCRW's UpClose conversation series, co-creators David Benioff and D.B. Weiss share the secrets behind how they create the fictional lands of Westeros and Essos, what it's like collaborating with George R.R. Martin, and which show-runners inspire them most. 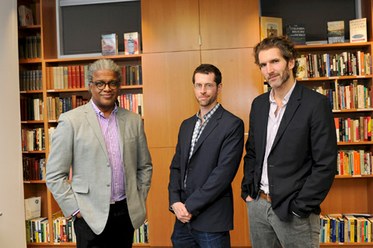 Banner image courtesy of Caught in the Moment