This is the story of a barber named Vaughn Hood, who runs a salon with his wife in St Johnsbury, Vermont. He happened to meet the radio producer Erica Heilman, who produces an excellent podcast called Rumble Strip Vermont. Like one does with a barber, they started talking. He learned to cut hair in Detroit Michigan, but soon he was drafted as 118-pound recruit, and sent into the Vietnam war. He was a sergeant in a company where hardly anyone would come back alive. He was decorated with honors after his tour, but he also came back with physical and emotional scars from the brutality and betrayals he he experienced. However, it was at the very worst moment, during one of darkest times after he came home, that he somehow found a way to come out of it, a better barber and a better man.

An American Life was produced by Erica Heilman and Larry Massett. It was originally produced for the podcast Rumble Strip Vermont. If you should ever find yourself in Northern Vermont in need of a hair cut, you can visit Jaboh Too in St. Johnsbury, where Vaughn Hood works with his wife Bev. 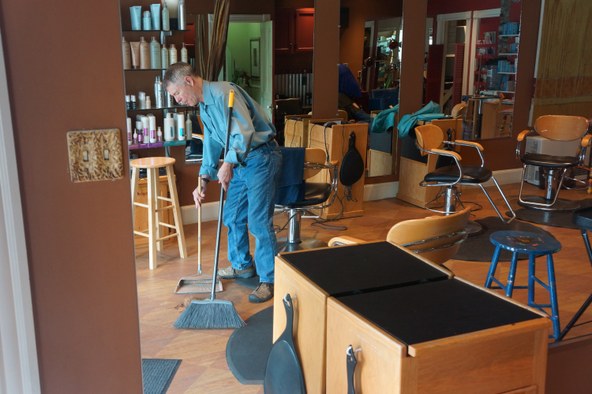 Vaughn Hood in his salon
Photos by Erica Heilman