Ricky Jay tells the story of the Bottle Conjurer. In London of the mid-18th century, hundreds of spectators filled the Royal Haymarket Theater to see an amazing feat: a man stuffing himself into a quart bottle. Thirty minutes later, they rioted.

Ricky Jay has been captivating audiences around the world for several decades as a sleight of hand artist on stage and television. He's an actor known most known for his work in the films of David Mamet, Boogie Nights and on HBO's Deadwood. He's also a lecturer historian and author of several books about magicians, and unusual performers. This story comes from a series of essays he wrote for KCRW back in 2003 called Jay’s Journal, which later was turned into the book Celebrations of Curious Characters.  His most recent book is Matthias Buchinger: The Greatest German Living. 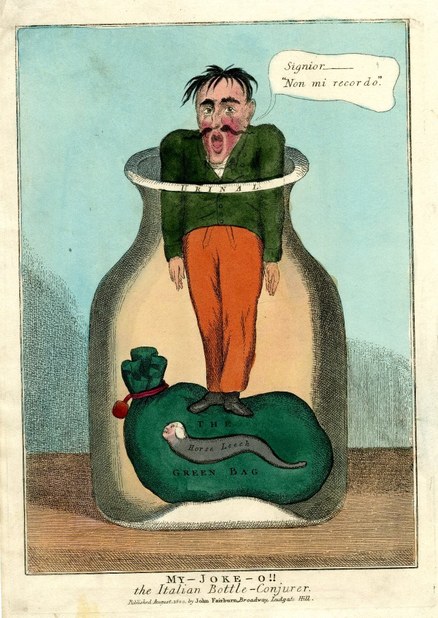 An Italian print of a bottle conjurer from 1820
Image: British Museum

Ricky Jay tells the story of the Bottle Conjurer. In London of the mid-18th century, hundreds of spectators filled the Royal Haymarket Theater to see an amazing feat: a man...

The Secrets of Sycamore School

Japanese teenagers Aki and Hyuma fly to Los Angeles to learn magic from one of their favorite living magicians, Shoot Ogawa. But when they arrive, they discover that the...

Nate Bargatze's father is a magician, and Nate was always excited to help out as an assistant at his shows. But, as he would later learn, not all magical assistants are...