One Moment Changes Everything First… If you're walking near the busy New York intersection of Broadway and Canal, (and you look up from your phone for a minute), you might see, at the very top of a brick building, the words ONE TIME painted in huge green graffiti letters. The tag has actually been there for over a decade. Somehow someone painted it on that wall several stories up, with nowhere for them to stand. The guy who did it goes by the name One Time. Well, he USED to go by One Time, until something happened that flipped his life upside down. He went from a street artist avoiding cops on rooftops, to a suburban dad taking cellphone videos of his kid.

Then… Sarah's dad George and his friend Terry have been hunting and fishing together for years and years. Like any pair of old fishing buddies, they love to tell tall tales about their adventures, and they're good at it. For instance, there was this one time they went out to hunt bear with bows. It was the first time they'd ever gone out to hunt something that could hunt them, and it did not go as planned. 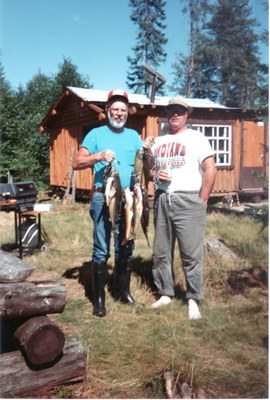 Produced by Sarah Cannon with thanks to Scott Smith

Banner image: Broadway and Canal, courtesy of One Time