The Auctioneer is a radio story produced in 1989, by musicologist and performer Ned Sublette. You may know him from his music that combines Latin rhythms with cowboy music, on albums like Cowboy Rumba. Over 20 years ago he recorded a radio documentary about a very different occupation that also combines art forms -- call it a cross between music, carnival talkers and old time southern evangelism. 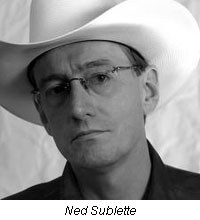 The story was originally produced for New American Radio; the series producer was Helen Thorington. The program is no longer on the air, but you can find lots of unusual documentaries, radio dramas, and experimental programs at somewhere.org.

Ned Sublette is an accomplished composer, musician, producer and musicologist and radio producer originally from Lubbock, Texas. He studied classical guitar and worked with experimental composers like John Cage, LaMonte Young, Glenn Branca and Peter Gordon. He's also recorded genre-bending music using Country Western and Afro-Caribbean influences. He's written several books including Cuba and Its Music: From the First Drums to the Mambo, published in 2004 and The Year Before the Flood: A Story of New Orleans, published in 2009.