I recently watched an inspiring video of John McLaughlin performing with a group of young international musicians who were about to graduate from the Berklee College of Music in Valencia, Spain. The spectacular, modernist campus opened in 2012 and was the first international campus established by the renowned Berklee College of Music in Boston. The 2017 performance I saw took place as part of La Nit de Berklee, the annual commencement concert for the college. McLaughlin received an honorary doctorate that year and participated in the commencement festivities. 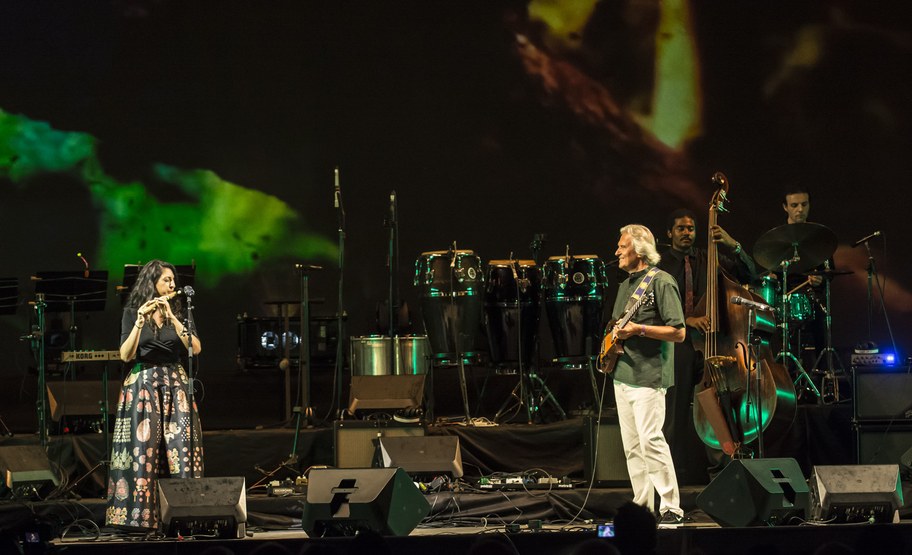 The concert video triggered for me a number of memories about McLaughlin. I first heard him with Miles Davis in 1969 on the album In a Silent Way and as a member of The Tony Williams Lifetime group the same year. But it was McLaughlin’s 1971 album My Goal’s Beyond that really reeled me in. The music was influenced by both the guitarist’s love of Indian music as well as his discipleship with his guru, Sri Chinmoy. One side of the record featured McLaughlin with a group of musicians including bassist Charlie Haden, drummer Billy Cobham, flutist/saxophonist Dave Liebman, tabla player Badal Roy, and tanpura (Indian drone) player Mahalakshmi. The flip side was solo McLaughlin. I listened to this seminal album all the time. It’s an early example of world music, where musicians from various countries and traditions came together on a recording.

Given all this cross-cultural fusion in McLaughlin’s history, I was not at all surprised to see him lead an international group of talented young players at the Berklee Valencia concert. I was particularly impressed by the bansuri (Indian bamboo flute) player and vocalist Rasika Shekar, with her joyful and inspiring interplay with McLaughlin on stage. The concert once again shows how music is a unifying force in today’s fractured world.

In his remarks to the 137 graduates from 30 nations, McLaughlin said, “The role of music is today what it has always been in the past. It is the universal language of love, both human and divine. Music is our highest form of collective unity, since in any given concert there will be Christians, Hindus, Muslims, Buddhists, and atheists, all under one roof, enjoying music.” Furthermore, “Whatever we give to music with love and dedication is repaid a thousand times over back to us in ways that defy categorization. To be a musician is one of the greatest privileges.”

Here is the captivating clip from that memorable night—McLaughlin on guitar, Rasika Shekar on flute and vocals, Hooni Min on piano, Tabari Lake on bass, and Joshua Wheatley on drums. The musicians bring new magic to these two well-worn standards, “Stella by Starlight” and “My Favorite Things.”