During the 1980’s, a lifetime’s worth of wonderful live African music performances took place in Los Angeles. African music filled KCRW's airwaves and local print media, and it seemed like a group came through on tour every week—Les Quatre Étoiles, Zäiko Langa Langa, Ebenezer Obey, King Sunny Adé, Barrister, Alpha Blondy, Fela Kuti, M’bilia Bel, Youssou N’Dour, to name just a few. Those shows were joyful and unforgettable, but sadly one African superstar never made it to Los Angeles, and that was the Congolese superstar Franco.

Not to be confused with the Spanish dictator, musician Franco (b. François Luambo Luanzo Makiadi, 1938-1989) was known variously by the nicknames “Le Grand Maïtre de la Musique Zaïroise (Congolaise)” as well as the “Congo Colossus” and “Sorcerer of the Guitar.” He fronted one of the most popular Congolese outfits from its inception in the 1950’s all the way to Franco’s death from AIDS in 1989. Franco wrote the song “Attention Na Sida” to warn people of the AIDS epidemic in 1987 before succumbing himself, like Fela Kuti, to the virus. 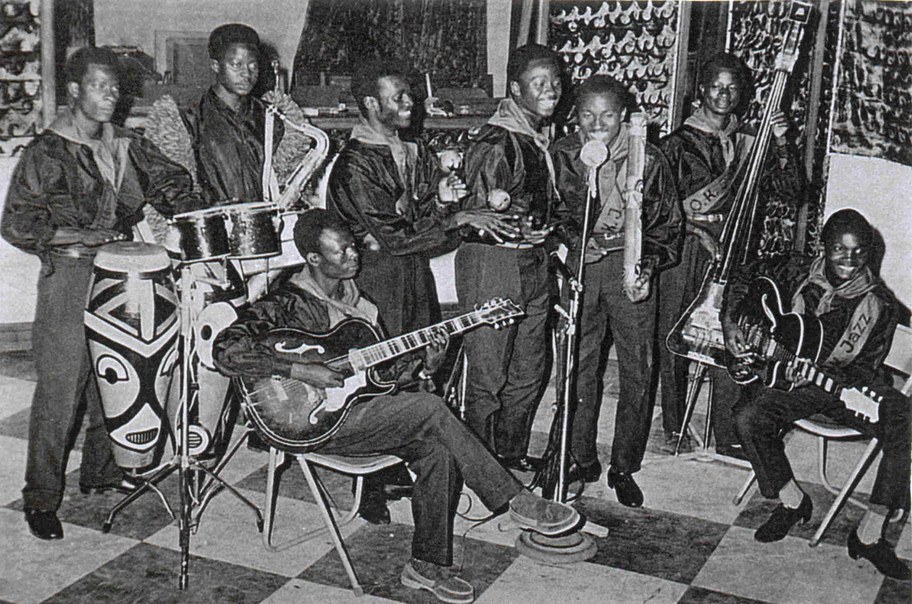 Franco started his musical life when the Belgian Congo was still under colonial rule in the mid-1950’s. Initially called OK Jazz, the band later changed its name to Tout Puissant O.K. Jazz (aka, T.P.O.K. Jazz or The Almighty O.K. Jazz). I love the group’s cheeky motto, “On Entre OK, On Sort KO,” which translates to, “You enter okay, you leave knocked out.” Franco was a superb guitarist who hired the best musicians and singers for his group, such as Josky Kiambukuta (singer), Ntesa Dalienst (singer), Simaro Lutumba (guitar), Verckys Kiamuangana Mateta (saxophone), and Papa Noel (guitar). Their early songs were short, usually around three minutes or less, probably because they were 7” or 78 rpm singles. Later on, as recording technology improved, songs became 15 minutes or longer, taking up a whole side of a vinyl record. This was dance music, not music for concert halls. At the end of the night, even if you weren’t knocked out, you would at least be pooped out. 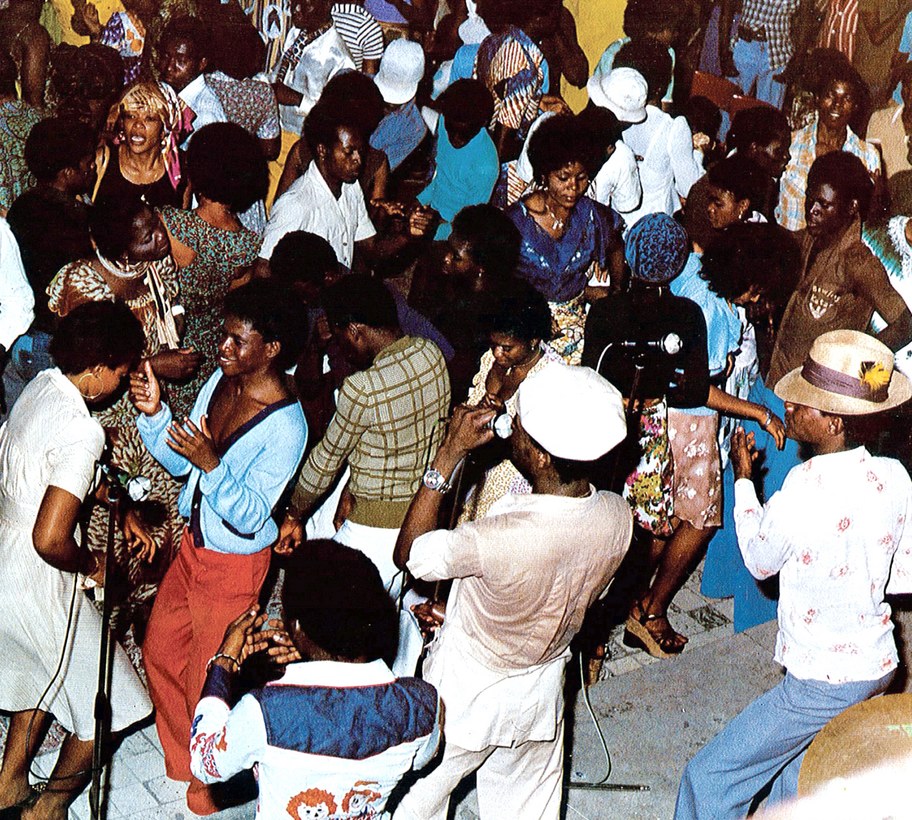 T.P.O.K.—as the name implied—produced a big sound that propelled dancers around the floor like few other Congolese bands. This was especially true in the 1980’s recordings, when the band was larger and benefitted from improved electric guitars and amplifiers. Guitar lines swirled like mad, melodies unfolded, and the vocal harmonies were superb. Franco’s music, however, could also be soft, tender, and romantic, as you can hear in the video below from 1975.

Franco was a big, imposing man who impressively kept the large T.P.O.K. Jazz organization afloat over decades. Throughout its long tenure, Congolese musicians and singers flocked to T.P.O.K. because it represented the ultimate, the ne plus ultra, in Congolese rumba—a heady fusion of African, Cuban, and other musical styles. The Cuban influence was particularly strong in Congolese rumba, dating back to Cuban music’s arrival on African shores in the 1940’s on Victor’s G.V (Global Victor) label. Franco’s T.P.O.K. was no exception, often playing cha-cha’s, merengues, and other Latin styles in concert and on records.

I recently thought about Franco because I heard a T.P.O.K. concert recording from Utrecht, Holland, on the radio courtesy of Nnamdi Moweta. The music captivated me and I was reminded of how amazing Franco’s concerts must have been. I would surmise the band never came to Los Angeles because it would have been cost prohibitive to tour with so many members. Concert venues who would risk booking a big African band singing in another language weren’t biting. Franco and T.P.O.K. only ever played two shows on the east coast in 1983, instead staying and touring in Africa and Europe. 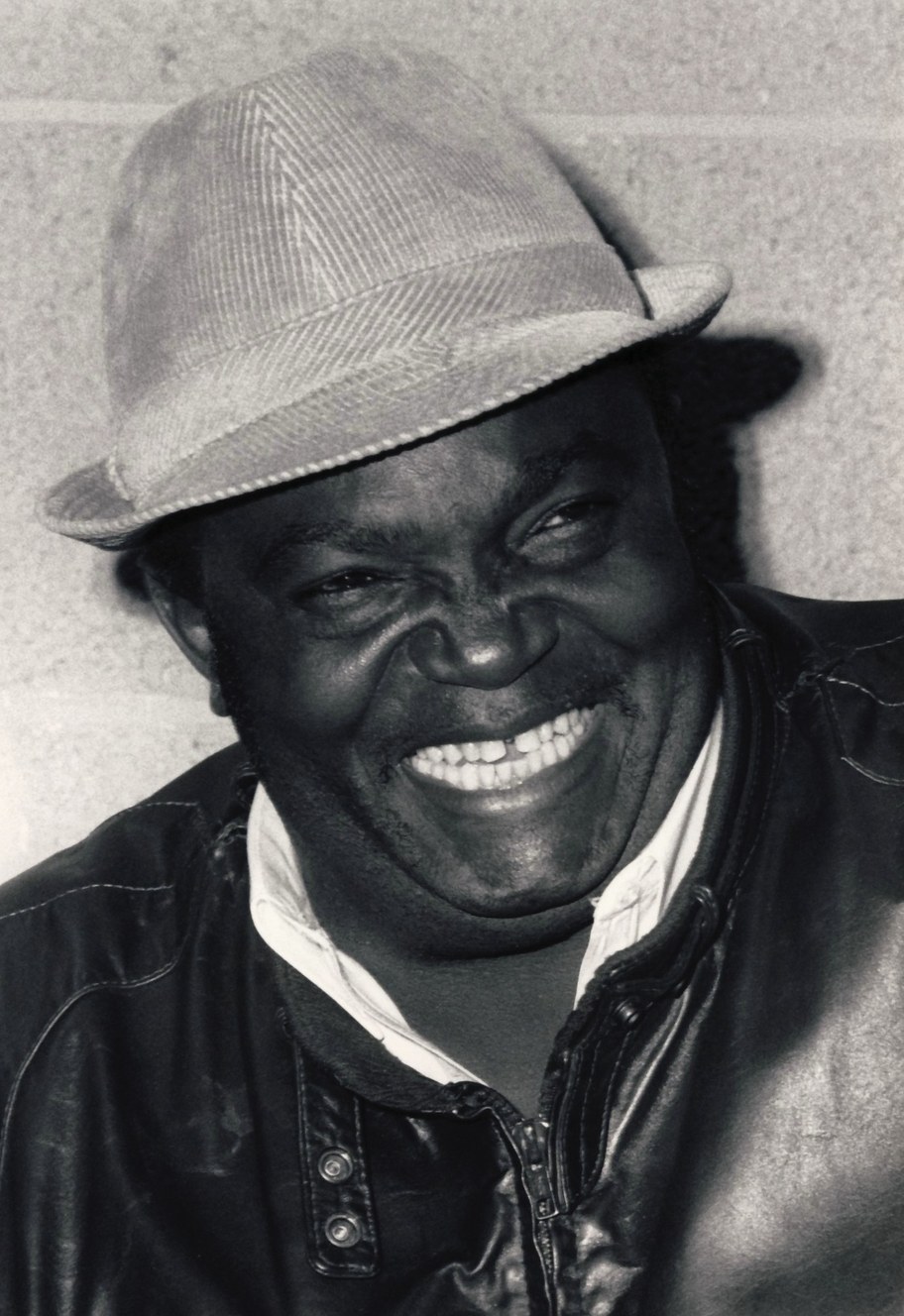 Franco in May 1987. (Photo by Ton Verhees, courtesy of Sterns Music)

For those interested in hearing and learning more about this amazing musician, the two best CD collections of Franco’s music are volumes one and two of Francophonic from Sterns Music. Volume 1 (double CD) covers 1953-1980, and volume 2 (double CD) the years 1980-1989. Rough Guide also issued The Rough Guide to Franco: Africa’s Legendary Guitar Maestro. Graeme Ewens wrote the biography, Congo Colossus: The Life and Legacy of Franco & OK Jazz.

T.P.O.K. Jazz performed at the Zaïre 74 Music Festival that accompanied the Muhammad Ali-George Foreman “Rumble in the Jungle” match in 1974. Other festival artists included Celia Cruz with the Fania All-Stars, Hugh Masekela, Bill Withers, The Spinners, Miriam Makeba, Tabu Ley Rochereau, and James Brown. The big show was promoted by Don King and underwritten by then-president Mobutu. A concert documentary called Soul Power is available to stream online. I would be remiss not to also mention the film about the famous fight called When We Were Kings, a wonderful feel-good film if there ever was one, which also shows some concert footage.

I’ve compiled a two-hour playlist of some of my Franco and T.P.O.K. Jazz favorites:

You can also stream the Utrecht concert recording that led me to write this post:

Finally, my sincere thanks to Ken Braun and Robert Urbanus of Sterns Music for providing images and recommending videos for this post. They are champions of African music, and I treasure their albums.