The Sea and Cake: Runner 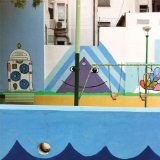 For nearly 20 years, the Sea and Cake have been one of the more distinctively reliable indie rock bands around, releasing quality albums at the rate of about one every other year.  So the advent of a new record of theirs brings about a curious paradox of reactions: excitement, because it is a chance to hear new music from the band, combined with a bit of a shrug, because, heck, it’s just another Sea and Cake album.  But to overlook any of them would be a mistake, as it would be to miss their latest, Runner.

Masters of subtle evolution, the Sea and Cake’s new album reveals some intriguing new sides to the band, while keeping the sonic trademarks that define them.  Electronics have always played a role in their sound, but songs like “Harps” and “The Invitations” echo the same sorts of sonic washes as M83 dabble with.  John McEntire’s rock-solid drumming is as motorik as it has ever been on tracks like “On and On,” while the strikingly clean acoustic guitar strumming of “Harbor Bridges” makes it almost sound like a lost Richard Thompson song.  Sam Prekop’s sighing breeze of a voice is hardly the most dynamic vocal instrument around, but, as usual, he invests just the perfect touch of emotional resonance, whether a Zen-like acceptance or a hint of world-weariness, on songs like “A Mere” or the albums’ graceful closer and signature tune, “The Runner.”  And Eric Claridge’s always throbbing bass and Archer Prewitt’s heady guitar figures adorn tracks like “New Patterns” that sound as close to Sonic Youth or even the Cars as they are likely to ever get (although I wonder what a Roy Thomas Baker-produced Sea and Cake record would sound like?)

The appearance of a new Sea and Cake album like Runner is always a cause for celebration.  Life would be all the plainer without them.

Runner will be available to stream on demand from Monday, September 10 through September 17, 2012.