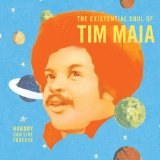 Tim Maia has a new cd out on David Byrne and Yale Evelev’s superhip Luaka Bop label.  It’s called The Existential Soul of Tim Maia.  He started the Black Rio music movement, a genre based on American soul and funk music.  Maia’s biggest influences were not Brazilian but rather American soul and funk music from the 60s and 70s.  Today his nephew Ed Motta–an amazing multi-sided talent— is one of its current practitioners, sounding like George Benson classics from back in the day.  Unfortunately Tim Maia isn’t here anymore, but his legacy and influence is stronger than ever in Brazil and elsewhere too.  He died in 1998.  And now, 15 years later, comes the first stateside release.

My friend Robert Rogness of Wine Expo is an authority on Brazilian music and many other subjects, told me this after reading the article on Tim in the latest New York Times Magazine:

I always joke that Tim Maia used the Bob Marley Method to superstardom: go to the US, work in a car factory, learn English, then get deported for smoking dope…..on a serious note, you cannot underestimate the force and power of the Black Rio movement. The government was seriously afraid when thousands of kids wearing afros took over a soccer field for a dance with that music. That was NOT the face they  (the generals, the dictatorship that ruled Brazil between 1964 and 1985) wanted to project. Plus, even though it took decades to happen,  Tim Maia Racional, Vols. 1 & 2, are now damn near the Sgt Peppers of modern Brazuka (Brazilian slang for “really Brazilian) pop, many tributes and covers.

The new record will help Tim Maia find a bigger audience;  never mind that it’s coming 15 years after his passing.

The Existential Soul of Tim Maia will be available to stream on demand from Monday, November 05 through November 12, 2012.