Artist Alexa Meade is best known for her paintings on the human body, turning real life subjects into seemingly 2D works of art. Her paintings have been exhibited alongside the work of Andy Warhol, Shepard Fairy, and Banksy and she has been commissioned to create art installations around the world. From the soundtrack to her teenage rebellion to the music that sets the mood for her to create art, she shares a wide-ranging set of songs in her Guest DJ set. (Hosted by Travis Holcombe)

For more: Your body is my canvas 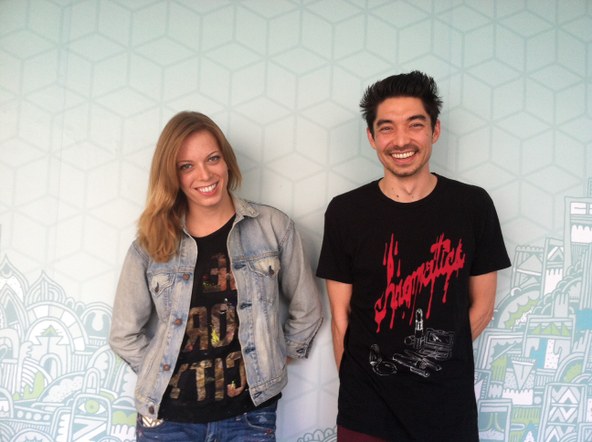 Travis: Hi I’m Travis Holcombe and I am here with artist Alexa Meade, who is best known for her portrait paintings on the human body, turning real life people into seemingly 2D works of art. Her paintings have been in exhibitions alongside the work of Andy Warhol, Shepard Fairy, and Banksy and she has been commissioned to create art installations around the world.

A TED Talk on her innovating approach has been viewed more than two million times and today we are here to talk about some of the songs that have inspired her throughout her life as part of KCRW’s Guest DJ Project. Welcome to the basement Alexa!

Travis: What is the first track you brought for us?

Alexa M: My first track is Rage Against Machine’s “Killing in the Name of”.

Travis: Coming out of the gate super strong today.

Alexa: Yeah, I mean I grew up kind of as a rebellious kid. I was the anarchist, vegan with a megaphone bull horn leading protests and stuff, so this was my anthem in high school.

In high school, I helped organize this school wide walk out against the war in Iraq. And I got called into the principal’s office in the middle of this protest that the students were organizing. It was raining that day and I was all soggy and I looked like I was crying and so he was so lenient with me. And rather than expelling me, he gave me in-school suspension. But the whole time he was being nice to me, I was singing in my head over and over again “F- You, I won’t do what you tell me!” and so this song “Killing in the Name Of” was pounding through my head.

*Song: Rage Against Machine - Killing in the Name Of*

Travis: That is a track from Rage Against the Machine called “Killing in the Name Pf”. What’s next?

Alexa: Secret Circuit “Knocking on Wood”. That’s been my like go-to song for the past year or so. Because I spend so much traveling and have such a weird connection with home, I have decided that while I am in Los Angeles, I’m going to do everything I can to really make my home feel like home.

And, so for me, that meant making so much artwork in my house that I am turning it into a fun house. And so there are all these different contraptions and rooms that like have surprises in them. And this song is kind of the anthem to it. It has this weird psychedelic feeling to it. And it always takes people on this mystical journey as they enter to this strange room of my bathroom closet, which is like a neon jungle surprise. 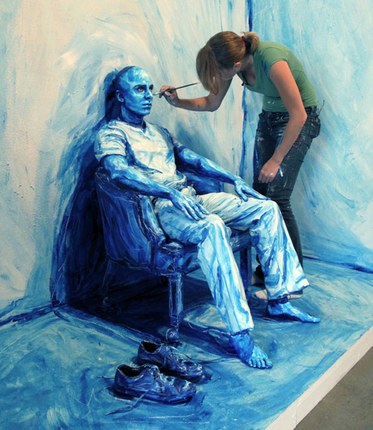 Travis: So is this specifically the soundtrack for your bathroom closet or is this the whole house’s soundtrack?

Alexa: This is specifically the soundtrack for my bathroom closet. That was a project I made with Aza Raskin. And while we were building this neon jungle, we were listening to Secret Circuit on repeat. And so, it was only fitting that the songs that inspired it are the songs that become part of this world that people will enter into.

Travis: “Knocking on the Wood” by the band Secret Circuit. I’m speaking to artist Alexa Meade about some of her favorite tracks on KCRW’s Guest DJ Project. Alexa, what is your next track?

Alexa: My next track is Hot Chip “Ready to the Floor”. When I first started doing my paintings on people, every time before I would do a painting, I would always put on this song and it will totally put me in the mood, and get me going.

And then, it was like a year and a half into doing my paintings - every time starting with this session of “Ready to the Floor” dance party -- that I finally watched the music video on YouTube and I realized it involved body painting in a way – it was people throwing buckets of paint onto people’s faces. And I was like “Wow! This is a strange synchronicity that I was completely unaware of!”

Travis: So has music always been an important part of your life?

Alexa: Music has definitely been an important part. It sets the tone. Whether it is a tone of like rebellion and political unrest for me, or for inspiring beautiful paintings or weird bathroom closet experiences.

Yeah, I’m always cognizant of what I listen to before I start my making art. Like what do I want to be putting into this piece? And so if I’m going to want to be going for high energy and like getting excited right before I have to do a live performance, I will put on Hot Chip’s “Ready to the Floor”.

Travis: That is Hot Chip with the track “Ready for The Floor”.And your next selection is Dean and Britta, “Silver Factory Redux (Sonic Boom Remix)” and it’s on a compilation called. “13 Most Beautiful Songs for Andy Warhol Screen Test.” Is Andy Warhol a source of inspiration?

Alexa: Andy Warhol is definitely a source of inspiration. And it was while watching this video of his screen test that I discovered Dean and Britta, because they provided the soundtrack for it. This was in 2012, I came together with collaborator Sheila Vand and we did this project in which I painted on her body and she was submerged in a pool of milk, and she does a beautiful performance in it and we always had Dean and Britta playing in the background. And because I first encountered Dean and Britta through the work of Andy Warhol, a lot of my paintings during that period had kind of a Warhol factory feel to them.

Well, it kind of has this watery feel to it and so while we were doing the work in the milk it just kind of seemed to be like the soundtrack to the artwork itself. 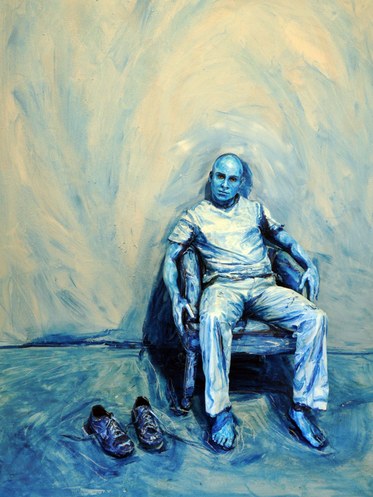 So much so when Sheila and I had our art show in Zurich, Switzerland and we did our performance, we got permission from the band to use that in the gallery. The performance was only supposed to be a couple minutes long but because it had to do with filling a bathtub with milk and then having her painted inside the bathtub we actually had a snafu where we had a milk sponsor for the show and they didn’t show up with the milk truck until like 20 minutes after the performance was supposed to start. So we just had Dean and Britta looping while an anxious gallery full of visitors are waiting for us to start making artwork.

Travis: Dean and Britta, with the track “Silver Factory Redux (Sonic Boom Remix)”. Alexa, what is your final song selection?

Alexa: Jamestown Revival, the song “California (Cast Iron Soul)”. I remember that I heard this song for the first time on KCRW. I remember just like driving around, it was a gorgeous day, the sun was shining and there were palm trees. I was like, ‘oh my god this is my life, it’s California!’

And it’s kind of become this beautiful album that I’m nostalgic for, my California experience and weird feelings about home mixed into that. Yeah, I mean, it kind of has this folksy twang to it and the theme of home has been something I’ve been thinking about a lot with all my time spent on the road and finally trying to find my grounding in California, but still not quite knowing where home is.

Travis: So Alexa, thanks so much for joining us here on KCRW.

Alexa: Thank you so much, Travis. I’m a huge fan and KCRW is really how I find all my music.

Travis: And for a complete track listing and finding these songs online, go to kcrw.com/guestdjproject and subscribe to the podcast through iTunes.