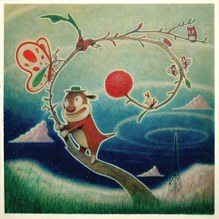 Painter Daniel Peacock has a whimsical retro style that is uniquely his own and his playfulness comes through in his personal playlist. Perry Como “transports him to another era” while he paints, but it’s The Beatle’s “Yellow Submarine” that opens up music as a “magical theatre beyond a melody” for the LA artist, who also has a taste for moody French songs and eccentric pop. Peacock has designed posters and a reusable bag for KCRW and you can see his work online at danielpeacock.com.

Transcript
Nic Harcourt: Hey, it’s Nic Harcourt and I’m here with artist and painter, Daniel Peacock.  I’ve been a fan of his whimsical-retro style of work for many years and we’ve actually used some of his paintings on our Sounds Eclectic posters and most recently on a bag that we offered during the pledge drive.  Today, we’re going to be placing excerpts of songs he’s selected that have inspired him over the years as part of KCRW’s Guest DJ Project.

NH: Let’s talk about this first song, “Summertime” by Jesca Hoop.  Tell us what’s so special about this song for you.

DP:  I was on a freeway and it was like May and I’m driving down and this came on and it was very, just playful and you know, some songs have a feeling of a road trip – you’re like, ‘Oh, great road trip song.’  And it was a summer day and it sort of said, it wasn’t summer yet, but here, once I heard it I go, ‘Oop! Summer just started.’  Okay.  My plans are laid out.  I’m going to have a road trip.  And sure enough, I made a little mixtape and two months later I was going up and down the coast having the greatest time and that was like the theme song.  It was really a very sweet thing and it’s so playful and just joyous and, you know, I get all verklempt about things – I mean sometimes I just get emotionally so touched and this one always makes me smile.

DP:  As I get older, I find I’m more in touch with what music is doing to me.  I get really emotional. I mean, I find myself getting really teary-eyed once in while with some pop music that I used to not really judge so much.  I’m more respectful and more open to the imagination of what songs are about.  It really changes the tone of my painting when I am painting.  The sounds would be sort of like colors to me and colors change the eras of a painting I would do; some music is like, ‘Oh, this is a blue song.  Oooh – there’s a little bit of red in the chorus.  Oops – there’s a bridge that feels a little yellow and back to the blue.’  And that’s how I sometimes can experience music.

NH:  That was a song called “Summertime” by Jesca Hoop, a big favorite here at KCRW and a favorite of our guest on the Guest DJ Project today, Daniel Peacock.  Let’s talk about “Yellow Submarine” by the Beatles. I saw your list before we sat down to talk and this is a song that, for me, I don’t really like it to be honest with you. I’m a huge Beatles fan and I’m thinking that it has something to do with the cartoon – which is why you picked this…or not…

DP:  Actually, this one always felt not so much of a song, but more like theatre.  It felt like I could see the song and I always like the sound effects as part of the musical experience.

DP:  That’s why this one has always been like a seminal thing -- like, ‘Oh, if I was gonna make music, I would do it like that.’  It opened up my taste for what I consider what you could put in a 2 minute song, a 3 minute song.  You know, the song actually by the way, is very odd.  And it is slightly disturbing.  And it’s not my favorite Beatles song, but it is the song that opened up music as a magical theatre beyond a melody.

NH:  That was “Yellow Submarine” by the Beatles as we are working through some picks of Daniel’s.  Now, this next one is a favorite of mine; it’s a Serge Gainsbourg song, “Je t'aime moi non plus.”  Tell us about this song and what it means to you.

DP:  Hmmm…I was up in the Hollywood Hills with a friend and we were photographing this girl who was making a demo and she was doing a cover of this song. I didn’t think she was much of a singer but the song was soooo, sooo amazing and I thought it was hers and I asked who wrote the song and she didn’t want to tell me that she didn’t do it.
This song, it felt like it was classical music.  I thought, this has to be something from hundreds of years ago, put to a really nice beat, and then Serge comes on and he sort of… walks through it. Here’s a guy I could get behind, I mean, this guy is just smoking a cigarette and just drinking some brandy and looking at the girl—something’s going on below the desk and he’s just laying down the track.

DP:  Oh, very much so.  That’s the great thing about painting, is your ears are free.  His music very much keeps me in a groove and it really is funny how certain music is like putting on a different pair of glasses and the mood changes.  He just puts me in like a little…sexy, groovy little man mode.  My French, you know, chain-smoking man mode.

NH:  Serge Gainsbourg with “Je t’aime moi non plus.”  Our guest is artist, Daniel Peacock.  Now the next song, I was really happy to see on this list.  In fact, I pretty much love everything on this list; it’s all music that I own. And I haven’t heard this one for a while, but I have a feeling I’ve played this on the radio through the years.  It’s Perry Como, “Magic Moments.”  What a dollop of loveliness this song is.  Tell us a little bit about it for you.

DP:  Oh my god!  Dollop is right.  When I paint, I prefer to sort of be transported into another era -- as if I could turn on 1958 Idaho and just be there for a while. And I listen to old records from the ‘50s – like my parents’ records kind of a thing...and this guy has this bouncing, little playful, ice cream cone kind of orchestra going on that just makes you just put a little giddy-up into what’s going on.

NH:  Perry Como with a little magic moment of our own here at KCRW on the Guest DJ Project with that song, of course.  We’ve got one more song to get to, and again, something that I personally love, a band that are a touchstone for me, always have been since the first time I heard them when I was about 13 years old, Led Zeppelin – “Ramble On.” Tell us a little bit about this song and maybe about Led Zeppelin.

DP:  Oh, Zeppelin is a funny thing, but I have to be honest – I didn’t discover them until I was like, 30 – I mean really late in the game.  I sort of avoided them as a teenager, thinking – well associating the wrong things.  And when I discovered them, it was them doing blues songs.  I didn’t know what they were all about and so suddenly, at a sort of an adult version of my life, I was able to just really appreciate it – I was like, ‘Oh my god!’
“Ramble On” has got the most beautiful connection of this pitter-patter acoustic drum and this bass line and I’m a kind of an amateur bass player and any bass line that comes in with its own melody is —you got me.

DP:  Being in a secluded place alone with some blasting music is really a gift and I’m blessed to have been able to do that once in a while.  But “Ramble On” and all of Zeppelin – Zeppelin is just a game changer--it just ups the energy and then it changes later on, it’s like one of those songs in 9th grade – Zeppelin’s about that – it starts off slow and you’re holding the girl and then it changes into a jam and you have to separate and rock out and then you go back together

DP:  …difficult to dance to.

NH:  We just heard Led Zeppelin’s “Ramble On”.  That’s fascinating stuff.  I really want to thank you for joining us at KCRW/kcrw.com.  And for a complete tracklisting and to find these songs online, go to kcrw.com/guestdjproject.  Thanks Daniel Peacock, great to see you.