Actress and singer Eiza González is a rising star who got her start in a popular Mexican telenovela and the From Dusk till Dawn TV series directed by Robert Rodriguez. She currently stars in the SXSW Film Festival favorite "Baby Driver and, for her Guest DJ set, she picked all 80's songs inspired by her family, epic road trips and her move to Los Angeles. Keep an eye out for Eiza in in James Cameron's futuristic film “Alita: Battle Angel” due next year. (Hosted by Eric J Lawrence) 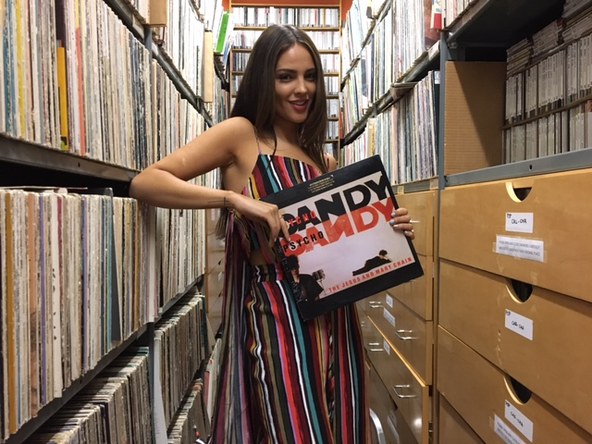 Eric J. Lawrence: "Hi I'm Eric J Lawrence and I am here with actress and singer, Eiza González. She rose to fame with the title role in a number of Mexican telenovelas and recently starred in the “From Dusk to Dawn” TV series. She also plays a robber in the upcoming summer release, Baby Driver, and is gearing up for another monumental film, the futuristic Alita: Battle Angel, written by James Cameron.

But today, we're here to talk about some songs that have inspired her throughout her life as part of KCRW's Guest DJ Project. Eiza, thank you so much for joining us.

Eiza González: Thank you for having me. I'm excited to be here.

Eric: So, what's the first track you’ve got for us?

Eiza: Well I'm just going to give everyone a heads up and say I’ve got a lot of 80’s going on, and the first one is Phil Collins’ “Sussudio”. This is a bit of a romantic/ fun playlist that people around my age, maybe a little bit older, will really feel familiar with.

The first one is “Sussudio”. My father loved this song. It’s the song I basically use whenever I'm sad. I like to dance to it and it's one of those songs that never gets old and is always super positive. (sings)

It just makes you happy and smile no matter what you're going through. So, whenever I'm feeling down, Phil Collins is my way to go.

Eric: Is dancing your normal reaction to music?

Eiza: Of course. I love music and it's funny because every time that I prep, for example, for auditions, I choose certain songs that get me in the zone for the role that I'm going for.

I think it's such a huge part of my work. I think that you're creating characters where you kind of define a personality, and a personality is not just based on thoughts and actions—that came from somewhere and that's from a taste in music, a taste in food. I kind of get really into it, I’m a bit method in that way. So I enjoy it and music definitely is one of the highlights of what I use for work.

Eric: That was Phil Collins, 80s icon, with “Sussudio”. Well the next track is another 80s classic from Wang Chung. It’s “Dance Hall Days”.

Eiza: This song is like teenage years of going to high school. I remember some of the first movies I ever watched were those 90’s typical American movies. They go to school, to prom, and that was the song of every movie. I think I always wanted…I didn't have a prom myself because I started working at 15, so I think that I always thought if I went to the prom, that would be my song.

EJL: Was that the same kind of music that was in the air in Mexico City?

Eliza: Well, surprisingly, it wasn't at all. When I grew up in Mexico, the reason why I sort of got into speaking English and learning other languages was through my father. So for the first years of my life, he focused on educating and teaching me English. Even though he was not American, he would talk to me in English all day. He had a big influence on my American culture, so that kind of defined my personality.

For me, the first portion of my life was very much Americanized. But it was beautiful, because I went through different phases. At a young age, I was all about the 80s and American music. And then from 12 to maybe 18, I became a singer myself and so I started getting influences from all sorts of different music. Music really guides your life and defines moments. I think that every time you listen to a song, it brings you back to a certain moment of your life. So maybe I just stick to these songs because they remind me of my father, but I love it. It really becomes a part of who I am.

Eric: That was Wang Chung with “Dance Hall Days”. So the next selection you've got is a ballad from The Cars.

Eiza: Yeah, these five really speak to me and “Drive” from The Cars is one that speaks to me because it was my father's favorite song and it also goes with his personality. I remember when I grew up, my father would build pickups and I would go with him and we would cross the border. We would drive to go buy pickups and bring them back. It was very much a big part of my life from age 10 to 11, and I would always look forward to those days. My dad would always play this song when we were on the way because it just makes sense—“Drive, The Cars”. It was just very cliché, I guess. And it's also so romantic, so I love it and I hope you guys enjoy it.

Eric: That was The Cars with “Drive,” the Benjamin Orr sung song as selected by our guest, Eiza Gonzalez. So what's the next track you got for us?

Eiza: “Cars” by Gary Numan. “Cars” reminds me of when my brother moved to Harlingen, Texas and we would drive from Mexico to Harlingen, which is a crazy long drive. If I could describe my drive, it was kind of a scene from a movie.

I did this my whole life, and I guess that I never really realized that I wanted to be an actress until I turned 15, but I had been doing some kind of directing in my head for the longest time and sort of scoring my life movie.

“Cars” was that song for me, and that car trip was very close to my heart because it was that one time when you’re stuck in a car, road tripping with your family. This is kind of the soundtrack for my teenage years on my way to America.

Eric: That was Gary Numan with “Cars”. We conclude with another 80’s classic—it's Blondie with “Call Me”.

Eiza: Blondie. Blondie is my favorite, definitely. She was just that artist that, when you were young, were like “What? That's amazing”. It was so unique and fresh, authentic and different.

It gave me mixed feelings and the lyrics really connect with me, and I just loved it. Blondie is my go-to artist, and this one is what I'd listen to when I moved to the States. I was renting a little room in this beautiful house and I didn't really have a plan. I was just excited to be here and I didn't even have an agency or manager. I didn't even know I was going end up working here.

“Call Me” was that song that would play and it was like the ultimate American dream, you know. It was like not having a lot of money, just living in this little room in someone else's house, listening to this retro music, walking down Hollywood Boulevard, with all that vintage feel to it. It just gives me the chills every time I think of it. And that's kind of where everything started for me. That’s when I started making decisions about moving here permanently to pursue a career. So “Call Me” by Blondie always reminds me of the beginning period of my life in America.

Eric: That was Blondie with “Call Me”, a classic single from them. So, I want to thank you for coming down and sharing this music with us.

Eiza: Thank you. I hope I can get back soon and now do a Mexican playlist so we can tell everyone about the good old tunes in Mexico.

Eric: For a complete track listing and to find these songs online, go to kcrw.com/guestdjproject and subscribe to the podcast through iTunes.