Emmy-nominated actor and comedian Jeff Garlin stars in the ABC sitcom The Goldbergs and will reprise one of his most critically-acclaimed and beloved roles when the series ‘Curb Your Enthusiasm’ returns to HBO in October. Motown and soul are the sounds that speak to him and he shares some of his favorite hits from his childhood. (Hosted by Eric J. Lawrence) 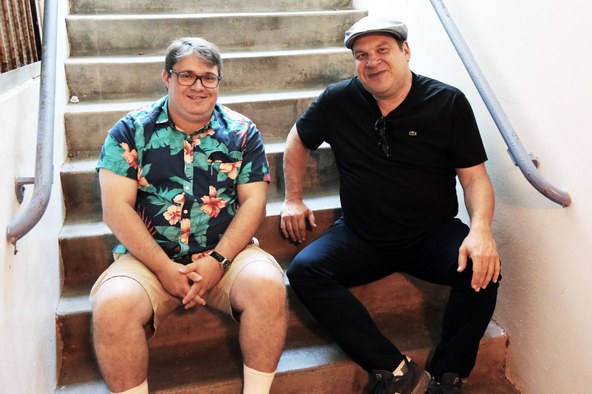 Eric: Hi, I’m Eric J. Lawrence and I am here with Emmy-nominated actor and comedian, Jeff Garlin. He stars in the ABC sitcom The ‘Goldbergs’ and will reprise one of his most critically acclaimed and beloved roles when the series ‘Curb Your Enthusiasm’ returns to HBO in October. But, today we’re here to talk about some songs that have inspired him throughout his life. Jeff, thank you so much for joining us.

Eric: Well, what’s the first song you got for us?

Jeff: First song is Inner City Blues (Make Me Wanna Holler). Is it “makes” or “make”?

Jeff: Make me wanna holler, you know ,look at me.

Anyhow, Marvin Gaye, that’s a song I’m quite fond of because the Inner City Blues do make me wanna holler. I was a kid, living in the suburbs of Chicago. And I had no idea what inner city blues were or why you’d even wanna holler. Not a clue, man. I would just groove to it, there was something about it that hit me.

Looking back, I could tell the dude was black even though at that point in my life, I didn’t spend much time with any black people. I didn’t live in an area that was, or a school system that was integrated.

Jeff: Is that the right word?

Jeff: There were a lot of white kids. But I didn’t think anything of it either way, you know?

Jeff: By the way, a song like ‘Inner City Blues (Make Me Wanna Holler), that was played on Top 40 radio.

Eric: That was Marvin Gaye with ‘Inner City Blues (Make Me Wanna Holler)’ selected by our Guest, Jeff Garlin. You mention how there’s this theme going through the songs you’ve picked. Was that time period for you particularly important in that sort of early teen years?

Jeff: Oh god yes! It was, I think looking back, the happiest time of my life. You know, nine, ten years old I was as happy as can be.

I was living in Chicago and it was carefree, man, it was car free. Everyday snow, summer, doesn’t matter I was out playing sports. I was out hanging with my friends. The truth is, I was and here we’re coming up on the next song which is ‘Superfly’ by Curtis Mayfield. I initially had no idea what “blaxploitation” films were and they came about and so now to me, here’s what happened with ‘Superfly’ I heard the song on the radio and I’m like “Wow, that’s cool!” and I bought the 45.

Now ‘Superfly’, different than let’s say ‘Inner City Blues’, where it was just a paper sleeve and you just saw the name of the song. ‘Superfly’ had pictures from the movie on the sleeve. And so that was very exciting.

And I guess, if you’ve ever seen the album, the colors. But I had no idea it was about this sort pimp drug addict. Since then, I’ve seen the movie numerous times and I dig the movie. That’s a great one if you want to get into a great “blaxploitation” film; ‘Superfly’ is a great movie.

Here I am, this kid in the suburbs of Chicago, digging ‘Superfly’ not knowing Curtis Mayfield was a Chicago guy. And it just, again, listening to this song and the lyrics, talking about this dude doing all these dangerous things, never occurred to me…. it was all about the groove, man. And Curtis Mayfield’s voice was as sweet as anything. Now I would get caught up in this, I like this way more than any of the “Pop” music. I love the R&B you know, man, and that’s the 70’s soul. WOW.

Eric: That was Curtis Mayfield with “Superfly” as selected by our guest, Jeff Garlin. What’s the next track you got for us?

Jeff: The next track is “Papa Was a Rolling Stone” by The Temptations. Now, the lyrics are “Papa was a rolling stone, wherever he laid his hat was his home.” I did not understand those lyrics at all.

I didn’t know papa was out getting laid out all over town and laying his hat down and there he is, “I’m home”, wherever that is. I didn’t know that. I also didn’t know that there was a 12-minute version of this song right. I remember Craig Stone, that’s the kid; I remember specifically saying to me, “Have you heard ‘Papa Was a Rolling Stone’?” And I’m like no, I haven’t heard it. “Oh, it’s the best song” Now mind you, nine, ten years old…

Jeff: And I bought the 45 of “Papa Was a Rolling Stone” before I’d ever heard it, just based off my friend. I’m like I gotta get it. I was obsessed. And then when it came on and the beginning, you know it just sounds so mysterious. What’s going on, man? This is cool, you’re coming into a world, you know? You’re gonna be in this world and then I entered the world having no idea what the song was about! None!

But, my god, the groove, the voices. It just took me away. All these songs had a feeling from me. Like I’m getting goosebumps on my arm right now, just because of the feeling that I got from them, which I still get when I put them on.

And by the way, of all these songs, I’m gonna say that ‘Papa Was a Rolling Stone’ is the one that really hit me the hardest. And again, no idea of the lyrics! I’m a little boy, but clearly a hip little boy.

Jeff: Or, all little boys were hip back then, because that was what was being played on the radio.

Eric: I’m gonna give you a little extra credit

Eric: Here’s The Temptations with ‘Papa was a Rolling Stone’

Eric: That was The Temptations with ‘Papa Was A Rolling Stone’. So what’s the next song?

Jeff: Okay, now we’re gonna move into a little different direction. The first three were a bit more social commentary and this one, ‘Golden Lady’ by Stevie Wonder is more of me … again, didn’t know what this song was about. I knew the chorus ‘Golden Lady’, you know? But, when I heard this song I would think about whatever girl I liked.

I think at that time it was a girl named Andrea Waldman. And I thought of her when I thought of ‘Golden Lady’; mind you she was a white lady. There was nothing golden about her and she had no mixed race, there was nothing. I would have been more attracted to her if she had some golden in her. But, anyhow, I would here this song and just get caught up in the vibe of women and love. I was very much into girls. I mean, I loved girls and was like in love with them, crushes would have you, at a very early age. Nothing’s changed. I have at least a dozen crushes going at once. Number one, my wife! But I have lots of crushes.

Eric: Sure, well here’s Stevie Wonder with the song that maybe started it all, “Golden Lady”

Eric: That was Stevie Wonder with his great love song, “Golden Lady”, selected by our guest, Jeff Garlin. What’s the last track you got for us?

Jeff: The last track is “Family Affair” by Sly and the Family Stone.

Again, even though this is not specifically about love, the groove to this song to me is so sexual. I never knew anything about Sly and the Family Stone. I just knew, “wow, I dig this”. And I got the feeling when they said Family Stone that there’s a group of people. So I pictured these people having a great time, but also the groove is so sexualm so just beautiful and, man, you throw on “Family Affair” by Sly and the Family Stone, and a woman is gonna be happy. She is, it’s just such a feeling, aw man.

Eric: Well, let’s make some women happy with Sly and the Family Stone and “Family Affair”.

Eric: That was Sly and the Family Stone with “Family Affair”. Well, they’re all awesome songs Jeff, and I want to thank you so much for sharing them with us.

Jeff: I am thrilled and you better ask me back because I dig this, man!

Eric: For a complete track listing and to find these songs online go to KCRW.COM/GUESTDJPROJECT and subscribe to the podcast through ITUNES.