Comedian Kyle Mooney is a standout among the current Saturday Night Live cast and co-wrote and stars in a movie that was a favorite at this year’s Sundance Film Festival – "Brigsby Bear". From a Miami Sound Machine party starter to a J Dilla masterpiece, he tells us about the songs that influenced him."Brigsby Bear" opens in LA on July 28. (Hosted by Eric J. Lawrence) 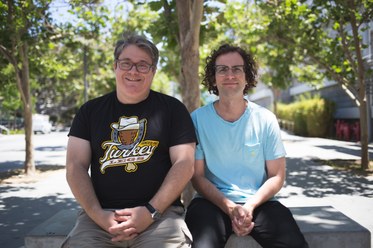 Eric J. Lawrence: Hi, I’m Eric J. Lawrence and I’m here with comedian Kyle Mooney. He’s a standout among the current Saturday Night Live cast and co-wrote and stars in a movie that was a favorite of this year’s Sundance Film Festival, Brigsy Bear. But today we’re here to talk about some of the songs that have inspired him throughout his life as part of KCRW’s Guest DJ Project. Kyle, thanks so much for coming down and joining us.

Kyle Mooney: Eric, I’m very excited to be here. Thanks for having me.

KM: We’ve got Stevie Wonder’s “You Are the Sunshine of My Life.” I feel like this song was one of the first songs I remember listening to as a child where it felt like it was kind of my own. I really fell in love with it.

It always made me so curious how the song intro is with a female and male vocalist, neither of which is Stevie Wonder. And I always wondered who that dude was because then Stevie just comes in and sings the rest of the song but we never hear about this weird guy who’s just there in the beginning. It’s a mystery.

EJL: In the meantime, let’s check it out. It’s Stevie Wonder with “You Are the Sunshine of my Life”.

*Song: Stevie Wonder—You Are the Sunshine of My Life*

EJL: That was Stevie Wonder with “You Are the Sunshine of My Life”, a number one single from back in 1973 in his album Talking Book. What’s the next track you’ve got for us?

KM: This is Slum Village and the title of the track is “Untitled/Fantastic.” It’s technically two songs meshed together. I chose this song because I guess similar to the Stevie Wonder song, this was something that truly felt like was my own.

I got into underground hip hop and I would get so excited every time a new J Dilla track would come out and sometimes it would be a while, but it was exciting.

I made a career out of making a lot of internet videos and I gradually got on SNL. I remember kids reaching out like, “Where’s the video? Where’s the next video?” cause sometimes it would take such a long time and I remember thinking, “I never gave JD a hard time.” I’m not trying to compare myself to J Dilla by any means but it’s okay that an artist takes their time and it’s okay for them to change it up; he was someone that changed it up quite a bit.

EJL: That was Slum Village with “Untitled/Fantastic,” produced by J Dilla. What’s the next song you have for us?

KM: We’ve got Billy Joel, “Tell Her About It.” Billy Joel, people have different opinions. I’m of the mindset that he’s one of the greatest living songwriters. I don’t tend to listen to a ton of lyrics; I tend to just listen to the music mostly. This is one, though, that I’ve always really tuned in to the lyrics because it’s a very romantic and delightful sentiment. He’s basically saying “If you like this girl, tell her about it. Don’t try to be cool, she wants that and there’s no reason to be a bad guy.” That’s my dumb summary, but I clearly remember listening to it in college and there was this girl I liked and I kind of felt like I wasn’t giving her the respect she deserved and then Billy Joel started talking to me and I was like, “I gotta tell her I like her, I gotta tell her about it.”

KM: Yes it did and then it didn’t.

EJL: At what point did comedy start entering into your mindset as a potential direction of work for your career and did that influence your ideas in terms of music and comedic effects in song lyrics?

KM: One thing that is so exciting for me to be here and to be talking about songs that are meaningful to me is that I thought for a long time that I was going to be a musician. I first played guitar and eventually started a hip hop group with my friend Dave McCary, who directed this film Brigsy Bear, and I truly thought that was going to be my route.

And then in my freshman year of college, my dad’s house burned down and with it all of my records, all of my production equipment, but that same week—this is so corny I’m sorry—I was accepted onto the school’s improv comedy group. So I kind of took as a signal that I kind of should do this. But I’ve never really gotten deep into comedy within songs because I can appreciate the sincerity.

*Song: Billy Joel—Tell Her About It*

EJL: That was Billy Joel with “Tell Her About It,” another number one hit single as selected by our guest, Kyle Mooney. What’s the next track you’ve got for us?

KM: This is Bobby Caldwell’s “I Don’t Want to Lose Your Love,” and it is a song I don’t think a lot of people know, I would imagine. Bobby had a couple big hits, namely “What You Won’t Do for Love” and he also had another song called “Open Your Eyes” that Common sampled for the song “The Light.” That song “Open Your Eyes” is on this album “Cat” and I came across the tape cassette and in my struggling days, before I had a career and I was just making internet videos with my friends and trying to scrape by, I used to drive in my 2001 Corolla that only had a tape player and this was a song that stood out. I think that it’s really pretty and it just kind of takes me back to the hustle and grind of going to commercial auditions and trying to survive.

EJL: That was Bobby Caldwell with “I Don’t Want to Lose Your Love.” Kyle, what’s the last track you have for us?

KM: Miami Sound Machine, baby. “Bad Boy.” This song maybe is my favorite song, I’ve decided. It’s incredibly danceable. If ever I’m put in charge of getting a party started, I always like to work this bad boy into the mix. It’s meaningful in different ways, but every year I feel like I discover or rediscover a song; there are maybe six songs that I listen to ad nauseam per year, but this is one from 2013 when I got onto Saturday Night Live.

I moved from LA to New York and it’s a scary process and you’re either in Thirty Rock or you’re in your tiny apartment. The little free time I had in my apartment, I was just hanging in my bed and hanging on my laptop and playing music. This was one of the songs that just always got me going, and I feel like I rediscovered it that year and since, it just always makes me smile.

EJL: That was Miami Sound Machine, featuring Gloria Estefan with “Bad Boy.” Well Kyle, I want to thank you so much for joining us here at kcrw.com.

KM: Thank you for having me.