Celebrity Chef Mario Batali has a culinary empire that includes 26 restaurants, 10 cookbooks and numerous TV appearances, including The Chew on ABC. He highlights fellow Seattle native Jimi Hendrix, describes Jack White's music as "tangy", and talks about how music from John McLaughlin and Shakti helps him put life into perspective. His latest project -- Big American Cookbook -- 250 Favorite Recipes From Across the USA -- it out now. (Hosted by Eric J. Lawrence) 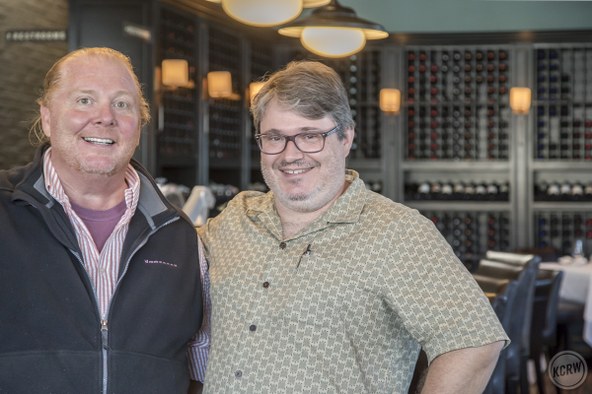 EJL: Celebrity Chef Mario Batali has a culinary empire that includes 26 restaurants, numerous TV appearances, including The Chew on ABC, and 10 cookbooks, including the most recent – Mario Batali: Big American Cookbook. Today, we are here to talk music - specifically some songs that have inspired him throughout his life. Chef Batali, thank you for joining us.

MB: Thanks for having me.

MB: It’s by R.E.M., one of my all-time favorite bands. It’s called, “She Just Wants to Be”. It’s off a record called “Reveal” which in my opinion might be my favorite record they ever wrote.

I happened to be on tour with them in Europe because I had befriended them maybe four years before this record came out and we met in Venice and I hosted a little dinner for them. And then we went to Padova, where they had just re-opened the Capella degli Scrovegni, and I took a bunch of friends of the band in to look at these magnificent paintings – these frescos that had been restored. And then we went to the show.

It opened with “Begin the Begin” and I remember thinking, “Oh my God.” This is the first time I have seen a band where I really knew the people that well and it was just such a personal experience. And “She Wants to Be” is where Peter finally really get the chance to play this kick-smoking, unbelievable guitar solo, which he’s not one to do because he is a guitar player that doesn’t want to just show off. He’s an ensemble guy. But he is so good at it, and it drives me crazy when he does.

So he did it, and Michael gets to really jack on it and really sing hard, and there is this solo where Michael just gets down and kind of almost bows to him like he is bowing to a god or some kind of a symbol. And it just drives me crazy to this day. I see it every time I hear it.

EJL: That was R.E.M. with “She Just Wants to Be,” as selected by our guest, Mario Batali. What’s the next song you’ve got for us?

MB: It’s by U2 and it’s off “Achtung Baby”, and it’s called “One”. If you haven’t heard this song I don’t know what rock you could possibly live under. Perhaps the anthem of this time of Rock Pop music in the arena format that U2 mastered and still owns.

The joke between me and my buddy, Bono is, “Remind me, did we co-write this song?” And he’ll say “Yes we did.” And we were going to call it “Three” but it didn’t make sense.

There’s almost nothing you can say about the haunting simplicity of Edge’s guitar and it’s the simple chord progression that people bust Edge’s balls for all the time. They say he’s not one of the great guitar players and I’m like, f*ck you, yes he is.” And it’s because he has a sense of putting together things that are so haunting and so simple that it’s not some giant technique—it’s a connection to a higher realm of harmonic, and it just blows my mind every time I hear it. I can hear it on the radio from a distance and it will stop everything I do.

EJL: A song like that—a song like U2’s “One” -- is obviously something that is deeply collaborative. In what ways do you feel that cooking is collaborative?

MB: Well in every way. If you’re cooking by yourself or for yourself, it’s one thing. But if you’re working in a restaurant kitchen—I mean the very first reason I got interested in working in a kitchen was working at a place called Stuff Your Face in New Brunswick, New Jersey. We made Stromboli and they came in two sizes: large and huge. Once I realized that you’re working together with a team against the common goal of what’s called a dinner rush -- which there lasted for eight hours—the idea that you need to collaborate and work with someone no matter what you think of them at that very moment is a powerful feeling. And then the relief and the camaraderie that you are able to enjoy when the rush has passed and you’ve made it through the storm, is something remarkable.

Whenever you collaborate with humans, I find that there’s a shared joy, particularly when you think that you can take each other to a higher level that you would have never been able to do singing, dancing, cooking, tapping, painting by yourself.

EJL: U2 with “One” from “Achtung Baby”, selected by our guest, Mario Batali. What’s the next track you’ve got for us?

MB: The next one is called “Lotus Feet,” and this might be the mother of all songs. The first time I heard this acoustic version—he’s done several, John McLaughlin and Shakti—the Shakti is the acoustic, kind of Indian instrument band, but John McLaughlin of course came from the Mahavishnu from the mighty Miles Davis.

But the first time I heard it, I knew I had heard it in another life. I knew that something in this song had penetrated me from long before I first heard it. And its melody is something that I’m sure had an influence on “One” by U2. There’s a sonic harmony that is something so simple and it’s almost like it’s on a tone flute the first time you hear it.

It’s such a magnificent melody and it’s done in such an under-produced way, but you can hear it and it shimmers in through the oddest of spaces in your mind. When I hear it, it brings me to calm joy every time without any malarkey—no religious or spiritual thing. It’s just something that takes your blood pressure down and it makes everything seem a little less annoying and important. It just puts everything in perspective.

EJL: Is music useful to you when you’re preparing food?

MB: Absolutely. Music is one of the things that affects my mood more than almost anything other than mere temperature. Mere temperature can really change your day. And music can do that; it can turn you up, it can bring you on. You listen to “Jumpin Jack Flash” at the right time, at the right day, in the right kitchen with a bunch of people working together and the vibe just comes in a little bit more slippery and slidey, and that’s the right thing about music.

EJL: One of the nice things about this Shakti and McLaughlin collaboration is that it is cross-genre in a way and that seems to be a progressive trend that exists in food as well.

MB: Absolutely--often done very poorly. The confusion of fusion cooking is only best done when it’s done by guys as good as John McLaughlin, of which there are few in any field. So you know it makes sense, but when I see Korean tacos, yes that makes a lot of good sense. But Mexican lasagna? Not so much.

EJL: Well here it is-- Shakti and John McLaughlin with “Lotus Feet”.

MB: I’m getting goosebumps. “Voodoo Child” by Jimi Hendrix. Jimi Hendrix was from Seattle. I’m from Seattle. There’s probably nothing as timeless as Jimi Hendrix’s music. His guitar mastery was something that was almost as powerful as the resonant truck we’re hearing right now inside our inner ears. It was something that drove me crazy the first time I heard it. You re-listen to those records 40 years later and it’s still like the first time you heard Jack White, who plays in the same wildly, uncontrolled, massively in control timber of complete cacophony, but in complete rhythm and sense. There’s nothing quite like it.

EJL: Growing up in Seattle, did you feel like Jimi was a kind of important local hero?

MB: Well for me he was more important than Bill Gates, let’s put it that way. And I love Bill Gates, I just hadn’t figured out Bill Gates yet. Hendrix was more accessible to me.

EJL: What’s the last track you’ve got for us?”

Jack White as raconteur, oddly enough, as storyteller in the world of guitar music and in the remarkable sense of the best word of an American musician is someone who captures every single piece of Delta blues and gospel and the Chicago sound and Motown and Curtis Mayfield all in one little bite and wraps it up in a way that is so delectable.

My favorite word to describe his music is tangy.

It captures me on every bit, every lick is at once sour and sweet and evocative and powerful and drives me crazy. It makes my back itch, makes me want to scratch stuff.

EJL: Rock n’ roll has a history of being youth culture and culinary knowledge is something that seems to come later in one’s life. Do you feel that’s the case?

MB: Well you know, as I’ve said to a lot of my friends, cooking pasta on the line is a young man’s game. You can know a lot, but you can’t move as fast as repetitively as it takes to make 350-450 plates of pasta in a six hour shift. So as cerebral as you may think you are, you need the body of a young man to be able to play that game well.

EJL: Mario, well thank you so much for joining us.

MB: Thanks for having me. This is a new format for me. I love it.