Phil Rosenthal is best known as the creator of the hugely popular sitcom “Everybody Loves Raymond” and is now bringing his signature sense of humor to the world of food, as the host of “Somebody Feed Phil’ on Netflix. His Guest DJ set ranges from Broadway classics to The Boss and The Beatles. (Hosted by Eric J. Lawrence) 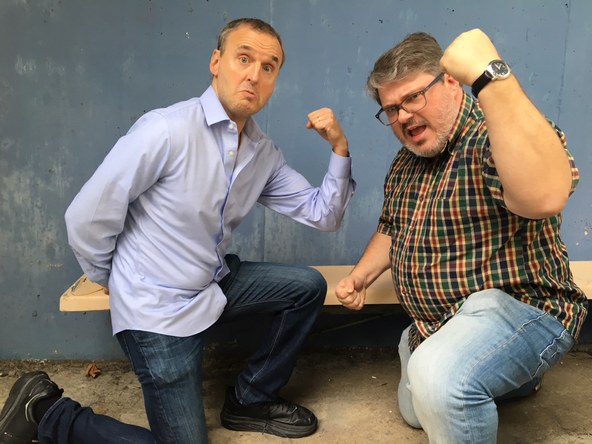 Eric J Lawrence: Hi I’m Eric J. Lawrence and I am here with Phil Rosenthal. He is best known as the creator of the hugely popular sitcom “Everybody Loves Raymond.” The show won more than a dozen Emmys during its nine season run and continues to air on syndication across the globe.

But now Phil is bringing his signature sense of humor to the world of food. He is the host of “Somebody Feed Phil’, a new Netflix travel series. Today however, we’re here to explore his musical inclinations. We’ve asked him to choose 5 songs that have inspired him throughout his life as part of KCRW’s Guest DJ Project. Phil, thank you so much for joining us.

Phil Rosenthal: It’s my absolute pleasure. Love the show, I happen to love music. I’m not going to sing…well, maybe later. But wow. I’m very happy to be here. Thank you.

EJL: Very cool. Well, what’s the first track you got for us?

PR: I went in chronological order of influence in my life. I was born in 1960. So that was a huge influence on me, but my mother had an album and usually she only had opera in the house.

PR: None of those albums were influential. They were only influential in getting me to shut the door and go to my room. But she had one album; she was a huge fan of Danny Kaye. She loved Danny Kaye.

And this album came out two years before I was born and it was a child-like album, in other words it was geared for children, but it had huge production. Danny Kaye…I hope the listeners check him out because you know stars disappear, we don’t hear about Danny Kaye that often. When was the last time you heard that name?

PR: Yeah. So he was very, very sweet. And very talented. And had such an enormous heart, but this was an early record and the track is “Mommy Give Me a Drink of Water.”

And it has a New York accent and I was born in Queens. And as a -- I’m going say two year old, maybe three year old -- this song struck me. It was the name of the album and it was the name of the song. What it is, is a little boy, probably around two or three, alone in his bed calling out for his mom. And who doesn’t identify with that? It’s primal.

But this is 100% relatable; it’s almost like an aria of the depths of a little kid trying everything to get his mom back in that room. I kind of get emotional listening to it again because it’s so sweet and so relatable, identifiable of what everyone goes through, that loneliness. It is calling out for your mommy. What more primal thing is there?

EJL: Let’s get primal with Danny Kaye with “Mommy Give Me a Drink of Water.”

*Song: Danny Kaye - Mommy Give Me a Drink of Water*

EJL: That was Danny Kaye with “Mommy Give Me a Drink of Water”. So moving from Danny Kaye doing a kids song, we’re now moving into Broadway. With something from the Tony winning show, West Side Story.

PR: So the other thing, and maybe I’m sure I’m not the first guest you’ve had in here who said that their early influences were what their parents listened to, right?

PR: So I’ll never forget this, my mother said that in 1957 there was a new Broadway show opening and she went to this show as a young women and it was the only time at intermission she bought tickets to see it again. That’s unusual.

And so we had the original cast album for West Side Story in our collection. Again, it was one of the only pop culture albums in our house that wasn’t opera. That was the pop culture. Danny Kaye. Westside Story. That was it. This song on this record was also funny. It’s the only one in the show that is comic relief. “Gee, Officer Krupke”.

EJL: At this stage, were you sort of thinking about your future life? And was comedy something that was important to you?

PR: Yes. Very important. My father was hilarious and my mother was funny too, that was the way we communicated in the house. We were either yelling or laughing. That was it.

We were living in the Bronx now and comedy was just, that was just the currency at the dinner table. And I loved tele vision. I loved it. I watched The Honeymooners who, that were already in reruns when I was a boy but I just wanted to be Art Carney. I just could imitate him and I could imitate Jackie Gleason and I knew the shows by heart because they were rerun every night. I loved it so much, and you just see funny people, you want to be them. And so you imitate them.

That’s the first leg up in the show business world. Make your parents laugh and if they have guests come over try to make them laugh so you can stay up a little later and maybe get some cake.

EJL: Well, here it is from West Side Story. It’s “Gee Officer Krupke”.

EJL: That was “Gee, Officer Krupke” from West Side Story. A portal song from our guest Phil Rosenthal. Now, you’ve got a hardcore pop culture song next on your list.

PR: Absolutely. This is, you know, if I was to go in my room and create my own entertainment, right, here’s a radio and now you get to choose what you want. Opera is blasting in the other room. Every Saturday afternoon that opera is coming on and I actually was told “don’t make noise”, right?

So I’m in my room and it’s 1964 I want to say, and here comes The Beatles so how do you not respond if you’re a kid to “I Want to Hold Your Hand”? The other thing I loved about them was their sense of humor. This was not serious time. This was fun time. Fun and they were funny.

EJL: Well here’s an AM radio staple. It’s The Beatles with “I Want To Hold Your Hand”.

*Song: The Beatles - I Want To Hold Your Hand*

EJL: That was The Beatles with “I Want to Hold your Hand” as selected by our guest Phil Rosenthal. Well, the next song you picked is something of a fast one I would say. A classic from Elton John.

PR: Yes, so I’m 13 when The Goodbye Yellow Brick Road album comes out. And I just thought it was a masterpiece. Even at 13, I’m like “this now, this is the evolution of the form. This guy, whoever this Elton John character is, this is amazing.” And then you see him. And wow, is he hilarious. I mean, he had a real sense of fun about himself. He is the least likely looking rock star in the world. I think, right? He’s kind of pudgy and short and he’s got big glasses and he just played it up. I didn’t know what gay was. I didn’t know that that’s what was happening. I just thought, this guy is dressing up like a character and was hilarious and didn’t take himself or the music seriously. But damn, if this song is not one of the best rock-n- roll songs of all time.

EJL: That was Elton John, co-written by with the classic Bernie Taupin with “Saturday Night's Alright for Fighting.” Now the last track you’ve got for us is something more of a tough guy.

PR: Exactly right. So when I first heard Bruce Springsteen, the first cut I heard was “Born to Run” when I was 15, ok? I’m listening to Elton John and here comes “uhhh”! And it actually scared me a little bit. What the hell is this? But then I saw maybe a clip. There were no videos. But I saw something or I heard, maybe I heard a concert and I heard the fun that he was having. And I heard that he wasn’t so serious either. And that he loved rock-n- roll and that he was the personification of rock-n- roll.

EJL: Now you’re talking about Tenth Avenue Freeze-Out. Which is kind of the story of the band in a way. 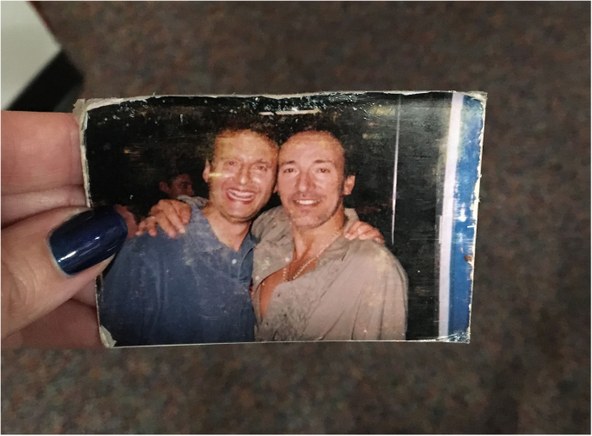 PR: Yes, yes. And it almost struts down this street of Tenth Avenue. You know it’s got this power and glory and everything that is Bruce Springsteen, the reason I love him, above everybody else in the world of music, is because he encapsulates a spirit and a feeling of joy. It’s like I wish I was a 10th as good at what I do as Bruce Springsteen as what he does. And yes it is the story of the band and now when he does that song, I was lucky enough to see the Broadway show, he does that song at the piano and he stops in the middle to talk about Clarence and there’s a break in the song where he says “and the big man joined the band.” And it brings the house down.

EJL: Sure, yeah. Well, here it is Bruce Springsteen with “Tenth Avenue Freeze-Out."

EJL: That was Bruce Springsteen from the classic Born to Run album with “Tenth Avenue Freeze-Out.” At what point does food sort of enter your life because that seems to be such a big focus for you with the new TV show at the moment.

PR: You know food is food. And music, laughs, travel. These are the joys in life! Right? Combine them all and you got a night! I’m just so lucky, is the overriding word in my life, very, very lucky. In fact, when my brother heard that I was going to get a show like this where I travel the world and eat, he said “Really? What are you going to call the show? The Lucky Bastard?”

EJL: Well, Phil I want to thank you so much for coming in and sharing your musical picks with us.

EJL: For a complete track listing and to find these songs online go to KCRW.com/guestdjproject