Actress and director Regina King made a name for herself early in her career in films like Friday and Boyz n the Hood. She's gone on to win two Emmy Awards for her role on ABC's American Crime and is nominated again this year. For her Guest DJ set, she moves from some sexy tracks to heartfelt selections dedicated to her family. (Hosted by Eric J Lawrence 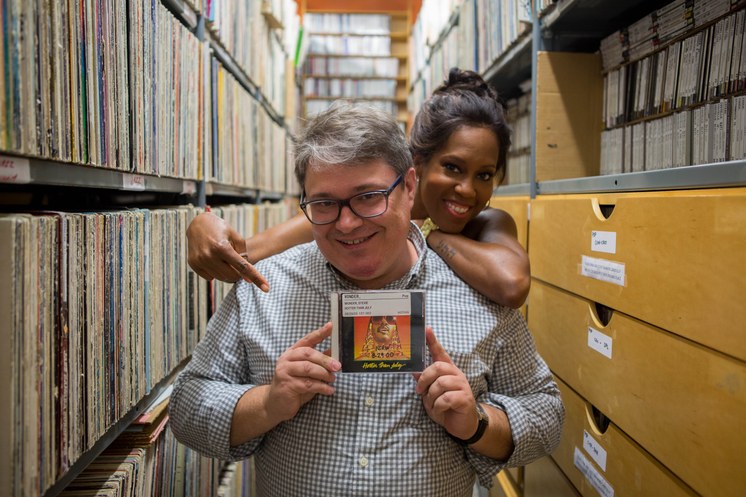 Hi I’m Eric J Lawrence and I’m here with actress and director Regina King. Early in her career she made a name for herself in films like “Friday” and “Boyz n the Hood”. Recently, she’s won two Emmy awards for her role on ABC’s “American Crime” and is nominated this year. She also starred in the critically acclaimed series “The Leftovers” and “Southland.” But today, however, we are here to talk about music—specifically five songs that’ve inspired her throughout her life as part of KCRW’s Guest DJ Project. Regina, thank you so much for coming down.

Regina King: Thanks for having me.

RK: I’ve got Tom Browne’s “Thighs High (Grip Your Hips Move)”. I love this song, I thought it was the jam when I was a kid and I did not realize what they were singing about. It took me to be a young adult—a young adult or old teenager, whatever you want to call it—to hear the lyrics and say ‘Oh my gosh, that’s what they were talking about. I love this song even more.’ That’s the thing that you miss about a lot of music today—they just kind of put it out there, you know, I whip it out and here, boom, take it. Where it was more finessed, more thought put into making you think as you’re grooving. I miss that.

EJL: Do you consider yourself a dance around the house kind of person?

EJL: Well here’s a song to get you moving. It’s Tom Browne with “Thighs High.”

RK: Well, you’re welcome. It’s always good if you can pull that off with a KCRW DJ. I’m feeling a little special, got my chest sticking out right now.

EJL: Well, what’s the next track you’ve got for us?

RK: The next track is Syd, “Shake Em Off.” I just recently was living back in New York and her album is kind of the soundtrack of my six months in New York.

EJL: Were you familiar with the whole Odd Future crew?

RK: Oh yeah. My son is a DJ and a music enthusiast as well, actually introduced me to The Internet. So I’ve been a big fan ever since. As a matter of fact, when I was in New York they happened to be in concert in Philly so me and two cast mates, we jumped on the train and went to The Internet concert. They were like “Oh my god!”, they couldn’t believe it and I couldn’t believe it. They were so great and very cool.

EJL: It’s pretty sexy music. Is that something you gravitate to when you’re listening to music?

RK: Probably. I think if you listen to a couple of songs on this list, that would support that thought. That’s why it was so hard to choose one song from her album. It’s an album that you just press play.

RK: The next track is Jamiroquai, “Blow Your Mind.” This one was another hard one because Jamiroquai is one of my favorite artists and I have so many of their albums. The reason why I decided to go with this one is, it’s when I discovered that my son truly had a gift for music. I would play it in the car and he might’ve been two—maybe not even quite two years old—and when you get to the end of this song, he’s doing this scatting thing and it sounded like someone was following along with him. I knew it was just me and Ian, we’re the only ones in the car, and so I turned it down and he’s basically doing the entire scatting part. I play the song again and, not only that, but he knows all the lyrics and the different instruments that would come in. I just knew that there’s something special there. That’s why I chose that one.

EJL: That was Jamiroquai with “Blow Your Mind” from the 1993 album, “Emergency on Planet Earth”. Did you yourself have music training growing up?

EJL: Well I did just recently watch “Ray” and you played one of the Ra -lettes, but the scenes of you in the studios recording, I’m assuming you were belting it out.

RK: You don’t want to hear what I was doing. We’ll save that for off the record.

EJL: Fair enough. Well, what’s the next track you’ve got for us?

RK: The next track I have is The Pharcyde “Passin’ Me By,” which to me, is a hip hop classic. I was just trying to put songs that kind of flowed together. That song, the first time I heard it, I remember being in a party and everybody being like like “What is this?” and, cut to now, still to this day—20 years later—when that song is played the whole room is like “Oh!”

EJL: It’s interesting too because it’s also a sexy song but it’s a song about the guys in the band getting passed by the girls who walk by.

RK: It’s a great coming of age story, too. And that was also a thing that was great about hip hop when I was coming up, when I was an old teenager or young adult, there was a lot of storytelling and, in this song, each verse tells its own story.

EJL: The Pharcyde with “Passin’ Me By.”

EJL: Going to your career, a lot of your early movies featured hip hop artists acting in them. Did you feel like their experiences as musicians helped them in their acting?

RK: I definitely feel like, especially in Cube’s case, that his experience helped his understanding of the subject matter, obviously. I wouldn’t say that Cube was a hardcore gangster or anything like that, but he definitely was familiar with the hood experience. I think that Boyz n the Hood was a perfect introduction for him into this world we call Hollywood because it gave him a place to express that was familiar and he was able to learn.

EJL: So, Regina, what’s the last track you’ve got for us?

RK: This last one is a special one for me because this one was produced by my son—it’s a remix. My son is a producer/DJ and he decided that it was time for a Benjamins remix. If you’re listening to it, you’re not necessarily going to catch The Benjamins. You’re going to be like “I know that, I know that sample, but where’s it from?” He flipped it pretty well. I’ve got to represent my son, so my last one is Cojo and “Buttercreem” as he likes to say for short, “Benjamins”.

EJL: Cojo with a Benjamins remix, “Buttercreem” as selected by his mother, Regina King. Regina, I want to thank you so much for coming down and sharing the music with us.

RK: Thank you, thanks for having me. I can’t wait to be back.

EJL: For a complete track listing and to find these songs online, go to kcrw.com/guestDJ project and subscribe to the podcast through iTunes.