In his Guest DJ set, legendary chef and restauranteur Wolfgang Puck takes us back to his early years in Austria, yearning for a life in the United States. He also takes us on a musical tour of his first cooking gigs and chooses a family favorite. Wolfgang recently opened his most experimental restaurant yet, turning his test kitchen into The Rogue Experience. (Hosted by Eric J. Lawrence) 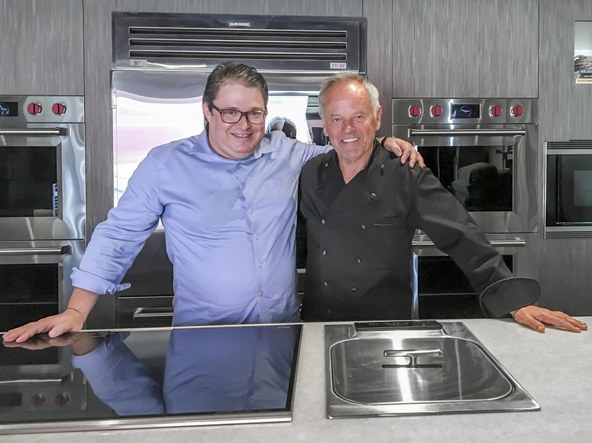 EJL: Hi I’m Eric J. Lawrence and I’m here with legendary chef and restauranteur Wolfgang Puck. The Austrian born culinary dynamo has over 100 restaurants worldwide and we are thrilled he is taking some time today to sit with us and talk about music as part of KCRW’s Guest DJ Project.

Wolfgang, thank you so much for joining us.

Wolfgang: Thank you, you know my mother wanted to me to be a musician, and that’s why she called me Wolfgang. She was in love with Wolfgang Amadeus Mozart so, unfortunately,I love to listen to music but I cannot compose anything.

EJL: Well, Let’s check out some of the things that you’ve been listening to. What is the first song selection?

W: The first song is, one song I really remember is from Scott McKenzie, and believe me that was years and years ago. When I was a 16 year old boy in Austria, and Scott McKenzie sang this song about San Francisco. This was the hippie years and everything, everybody was smoking dope, and being on the streets and love was free. I said I want to be there too. I want to go to San Francisco.

Now, naturally I was too young to go, and I still had to learn, but already at that time I was dreaming about coming to California. First San Francisco and then I ended up in LA, without the hippies and everybody, but I still remember that song-- - hanging out with my girlfriend in Austria and saying “I will go there one day.”

EJL: You eventually did come to America, I think, in ’73.

EJL: How much of American culture was present to you in Europe when you were growing up?

W: Well you know I always loved songs from America, I loved American music, and also English music. You know the Rolling Stones, and Pink Floyd and everybody started at that time in the late 60’s and early 70’s and so forth. So Music was always a big part and obviously the movies. American movies, you know, so already at that time I had the dream of coming to America and making some money hopefully.

*Song: Scott McKenzie – San Francisco (Be Sure to Wear Flowers in Your Hair)*

W: I didn’t wear any flowers, but I’d put a few flowers in a few girls’ hair. So that was that. (Laughter)

W: Well, I have one which I remember really also is a song where I was in Los Angeles already, and I had opened Spago already, and it was during the 1984 Olympics here. And Lionel Richie was performing at the closing ceremony of the Olympics. And he was singing that song, you know, to Party All Night Long, and it was amazing because a hundred thousand people would dance to this song. It was like the biggest party. The whole city was so proud we had the best Olympics ever and so forth, and seeing that, I remember him saying on stage: “A billion people are watching us, let’s dance.”

Lionel Richie actually became a very good friend of ours. Him and his fiancé, they’d come to the house, or I’d cook at his house, and I love his music. And it’s great because he does a lot for charities, and his music really stays on forever. Longevity is really what is important.

You know, when you go somewhere Lionel Richie is playing, you know there’s going to be a party. You know you’re going to get up and dance. I still love him. You know, having made songs, that long ago and they’re still played today, and still performed today, and he performs everywhere, and it’s sold out everywhere. I think it’s amazing, so I really respect him.

EJL: That was Lionel Richie with “All Night Long” selected by our guest Wolfgang Puck. What’s the next track that you got for us?

W: I think we should go back a little back again. One of the first concerts that I ever watched was Pink Floyd. Pink Floyd played in Marseilles, living in south of France and working in Provence. Really, why is that song so important to me? Because I worked at a restaurant called “Baumaniere”, and that’s where I really found my mentor. Without Mr. Thuiier, who was at that time 72 years old, I probably wouldn’t be a cook today.

I might be a truck driver or something like that. You know, because at 19, I was making more money driving a truck than cooking. But I think to me, that was such a special place. A three star restaurant. The chef was so passionate about his craft, so inspiring.

I has heard about Pink Floyd vaguely…and The Rolling Stones, they were all starting at that time… and they were playing in Marseilles at the Veoldrome, which is the soccer stadium. And I never went to a concert like that. They were playing, and I thought it was one of the most amazing concerts I ever heard, and it was probably the first BIG concert, you know.

I heard the Rolling Stones once in Austria, that was also in the 60’s and I was pissed off at them because they made me wait for two hours om standing room only. I told Mick Jagger that one day, I said: I remember one time when I saw you I had to wait for two hours or longer until they all came on stage. I think they were probably smoking in the back and drinking and having a good time with the girls.

EJL: Well, Wolfgang there are probably many people that have to wait years to even get in your restaurant.

W: Ah, no, very easy. They just have to call and say “I’m a friend of Wolfgang,” like everybody does.

I love the music of Pink Floyd. If it’s “Money “or if it’s “The Wall”. I played it in our restaurant.

I still remember when I opened “Cut” in Beverly Hills 10 years ago, Bruce Willis was having a bone-in filet, that’s his favorite piece of meat with a bottle of Vega Sicilia, a very famous Spanish wine.

And then he looked really serious, you know, and he has his bald head, “Wolfgang, come here. Come over here”. I said “Oh, oh what did I screw up now?” He said, “You know what? Having a bone-in filet at Cut, and a bottle of Vega Sicilia, and listen to Money from Pink Floyd is like heaven on earth.”

EJL: That was the classic track money by Pink Floyd. What do you have next for us?

W: Well, I have another track which really reminds me of my first year in Indianapolis, and Elton John actually, who became a very good friend of ours and a very good customer.

I remember I went to a concert in Indianapolis and I remember the song “Yellow Brick Road” that was like the big hit at that time and, obviously, I was falling in love with a girl then so it’s even better.

But it was my first job in Indianapolis and, I remember, we went to an amusement park called King’s Island near Cincinnati and we stayed overnight there and listened to Elton John so it was really a special experience.

EJL: That’s Elton John with “Goodbye Yellow Brick Road”. So, Chef Puck, your final track is from the Swedish DJ Avicii, with a track called “Wake Me Up”. How did you discover him?

W: I have to drive my boys to school every day in the morning. My twelve year old son Oliver is a DJ, so he loves music, he makes his own music, he plays as a DJ. I remember, we were in Bahrain, they had the DJ and he wasn’t that good and I put Oliver up on the stage and everybody from Naomi Campbell to the crown prince, they were all dancing and clapping to Oliver as a DJ.

Now, it’s because of him I know who Avicii is, I know who David Guetta is, I know who Calvin Harris is -- you name them, I hear them because of him, if not, I would have still listened to pink Floyd, you know. So Avicii, I think it’s really a great song, and how often did I hear it in my car going to school. Ah, “Wake Me Up”. So, that’s really a special song which really connects my son Oliver and myself. You know, through music you connect with many different people, old and young.

EJL: Well, Chef Puck, I want to thank you so much for joining us here at kcrw.com.

W: Thank you so much.

EJL: For a complete track listing, and to find these songs online, go to kcrw.com/guestdjproject and subscribe to the podcast.