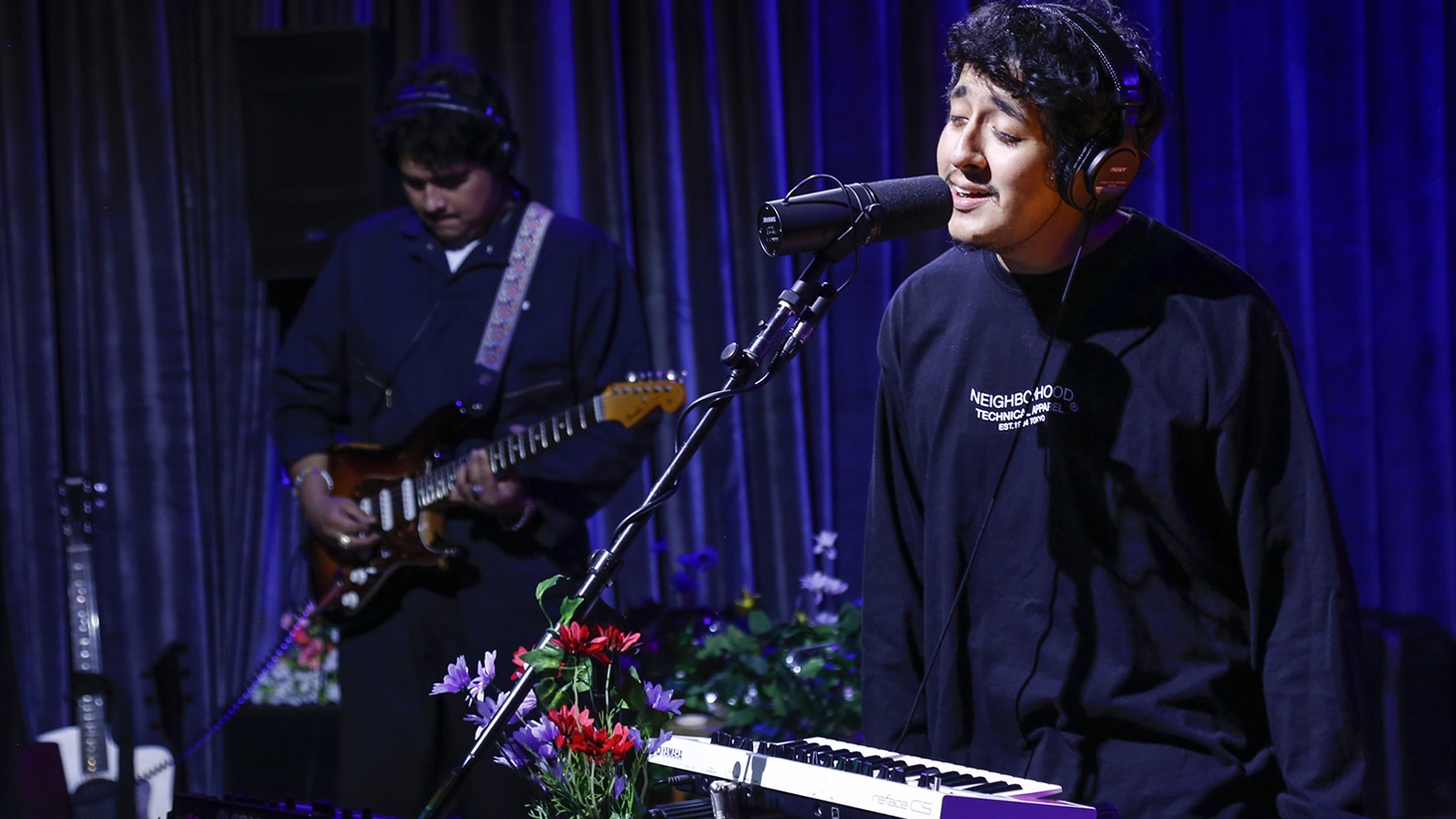 Get swoony: Cuco returns to KCRW HQ, and brings our performance studio fully back to life.
Photo by Larry Hirshowitz

What’s better than a fresh start? After several years of deafening silence — save for the occasional Anne Litt drum practice-sesh or mayoral debate — KCRW’s performance studio is back in action.

What began last month as Greater LA welcomed Hedwig and the Angry Inch co-creators John Cameron Mitchell and Stephen Trask for a vigorous conversation accompanied by a couple of stripped down music numbers, now leaps into high-gear — with a full band performance from Gen-Z’s finest purveyor of lo-fi-psych-pop, Cuco.

The Hawthrone native, along with his close-knit band, brought with them a spirit of full revitalization to their evening set. The show more than made up for lost time, with Cuco and crew allowing each soundwave to crest perfectly, bathing the room in good vibes all the way to a balcony filled with eager on-lookers who were almost as excited as we were to have live music back in the building.

The swirling, genre-hopping-dreamscape of Cuco’s latest full-length “Fantasy Gateway” — recorded in Mexico City — permeates the session, which features a dreamy performance of single “Aura,” plus songs from across the young artist’s prolific career and lyrics oscillating between English and Spanish. Even as Cuco’s interview with Morning Becomes Eclectic hosts Novena Carmel and Anthony Valadez gets real — Cuco opens up about getting sober, learning to trust after early career betrayals, and his self-described “psychotic” approach to musical reinvention — the feeling of being safely tucked away in a cozy fantasyland remains in tact.

Dive into the video to see and hear more for yourself, and read on for more of what’s on Cuco’s mind… 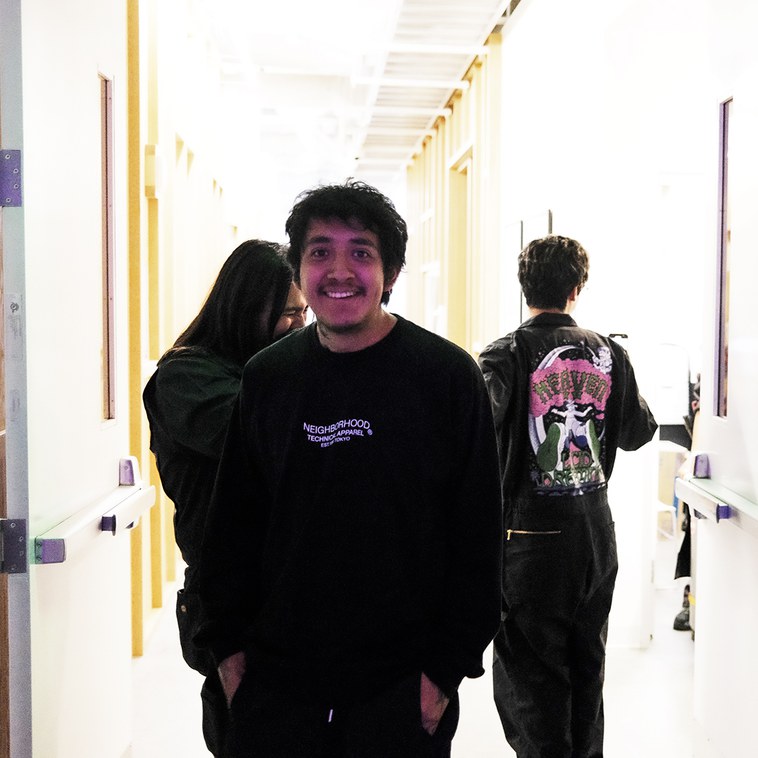 KCRW:  What are some of the changes that you've encountered lately that have made you into a different person?

Cuco: I actually quit drinking. It's about to be five months. That's the biggest change I've made. I quit on March 11 … almost half a year. It's kind of crazy, actually, because I've had that battle for a while, and it kind of runs in my family. So it just hit me, I was like, yes, just take care of myself, just get off the alcohol and drugs and stuff like that. And then I just got more active. I started training a lot more. That's what I've been doing and it's been really good. I've learned to be happy with like, feeling things and not trying to drown them. Actually, working on my last album made me realize that like … yo, I gotta lot of issues.

Your new album, “Fantasy Gateway,” has a very Southern Californian feel, like it was meant to be heard while cruising down the PCH. Is that something you were going for?

That's so funny you say that because I drive the PCH a lot. I’m a South Bay native. That's like where you’ve got the PCH — Manhattan Beach, Redondo, Hermosa — that’s all around where I grew up.

The album was recorded in Mexico City. Did that change your process at all?

Yeah, being in Mexico was nice. It was a change of environment. It was already kind of familiar for me to be in Mexico because, my family's from there and I was in Mexico City a lot. I have a lot of friends out there now. It’s one thing to travel and visit with your family when you're younger, but then as an artist to go and play shows and meet all these people and see the community that's out there … It was great. We were there for three days and made three songs — full songs  — we made “Aura” on our first trip. It just felt like being home. Historically you’ve tended to work alone, but it sounds like you had a team behind you for “Fantasy Gateway.” Was it challenging to let go of some of that control, and let things happen organically with more people in the mix?

I think when my crew was just starting,  I had been in a place where a lot of people took advantage of me. Really horrible people were around me. And I've always been by myself growing up. I was so used to having friends… then I didn't have those friends anymore. So just me being by myself, that is kind of still my comfort. But feeling like I could be around people and trust everybody that I have … I'm so trusting too at the same time. I'm so submissive to whatever anybody says. But now I have good people. I met people that I clicked with really well. It felt good to trust them to take my music to the next level, which they did.

We’re such fans of your 2021 single “Under The Sun,” particularly how it veers from a sprawling psych-pop track into a Cumbia. How did that one come about?

It just happens. Honestly, I've never been a person to force anything. If I feel like I'm thinking about something too much, then it’s just like, nah, I'm gonna leave it to the side.

We think of you as a genre-less artist, and yet there are familiar elements. It might be Cholo-soul, or future-soul. Whatever it is, it’s definitely the future.

That's fire. I think that's definitely the whole point of the album because I feel like my albums can be extremely different, but be cohesive because people are used to hearing different from me. And I'm very proud of that because it lets me really go out of bounds and that whole feeling of future-past definitely correlates. I definitely think that's one of the things I thought about.

Is “Fantasy Gateway” a portal into escapism?

A thousand percent, yeah. I feel like I created this world where I just wanted to let myself escape, but also to welcome the people that are listening. I wanted to create an experience that isn’t just an album and keep creating this experience that is a fantasy getaway. Ambar Lucid recently stopped by the studio, and we couldn't let her leave without having her ask you a question knowing that you are going to be here: What’s your favorite TikTok audio right now?

Big shout out to Ambar. She's really sick and very, very sweet. … My favorite Tiktok song? That's crazy. It was Druski’s sound, and he's like, “I just gave you an opportunity of a lifetime. And I'll be damned if. I'll be disrespected like this.” Before I leave, I’ll think of one that’s way funnier.

You’ve been playing along to some metal. Is that your track?

Every time there's a new Cuco song, it sounds nothing like the last, but we love it. Who is this?

Keep being psychotic, because the way you see the world is very special, and KCRW will forever be your home. Nutrition and mental health: Exploring the surprising science of food and emotion A new institute addresses intimate partner violence in the queer community. It’s a collaboration between the LA LGBT Center and national anti-violence groups. Opioid overdoses are a public health crisis — but largely ignored. One LA-based group aims to change that by making Narcan and fentanyl test strips accessible to all. A contender/titan on KCRW’s Top 30 for several weeks is none other than Icelandic diva Björk, capable of melting snowcaps with her otherworldly, mellifluous songs, winding lyrics, and…