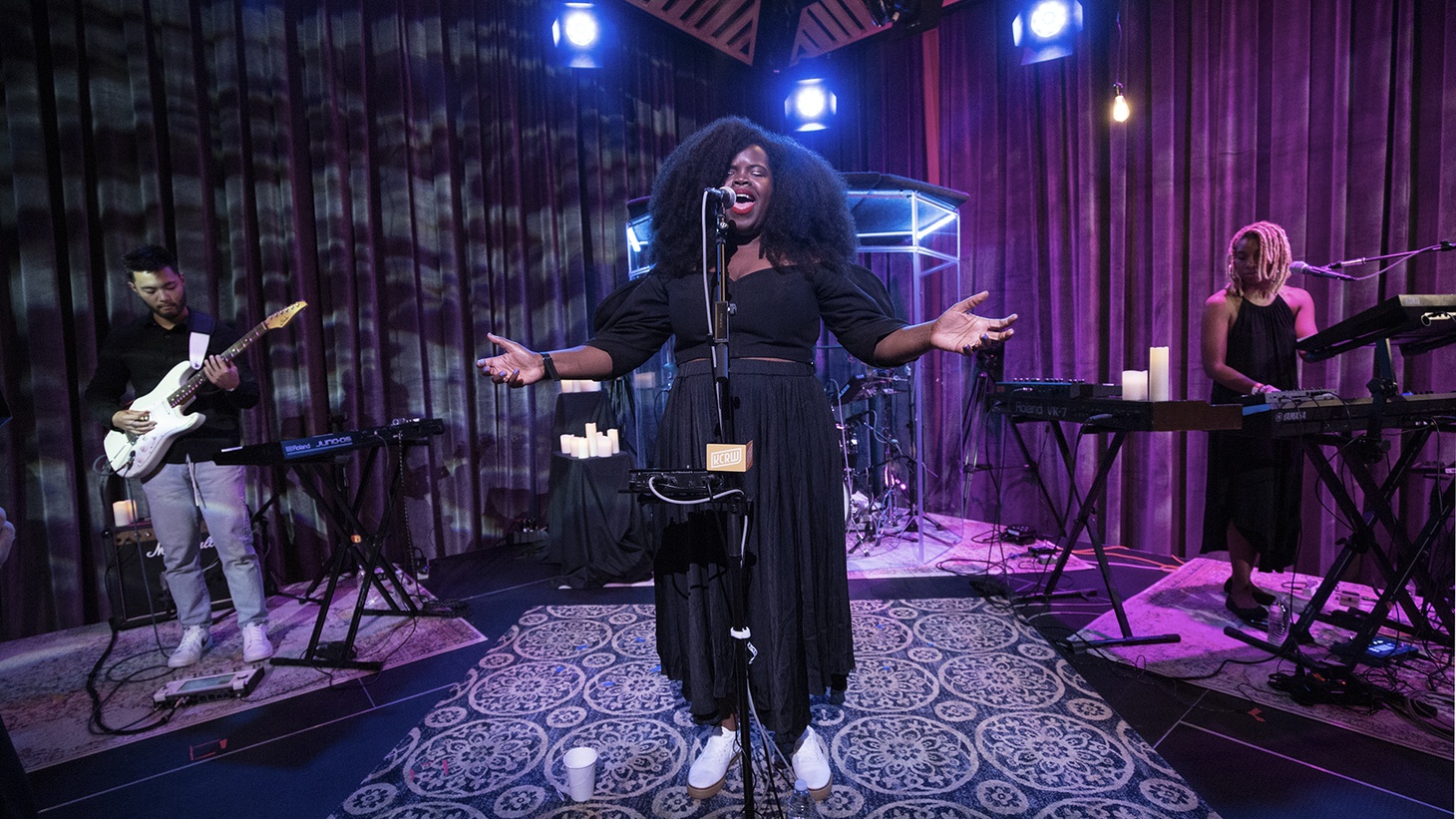 Danielle Ponder owns her space, and ours as she unleashes the dynamic sounds of her debut album ‘Some Of Us Are Brave’ into KCRW HQ.
Photo by Larry Hirshowitz.

Every so often, a voice comes along that can only be described as “definitional.” You know the ones: Aretha, Whitney, Adele… Public defender-turned-vocal powerhouse Danielle Ponder is next on the list, but there’s a parallel universe in which we might not have heard from her.

At her Live from KCRW HQ session — one that tears the roof off — the R&B/soul songstress opens up to Morning Becomes Eclectic co-host Novena Carmel about the self-consciousness she felt around her knockout voice growing up.

“I'll never forget, I was singing a modern song,” Ponder says. “And someone was like, ‘Everything you sing sounds like the blues!’ That stuck in my head.

“For years to come, I would try to be like [imitates soft, baby voice R&B]. It took a long time before I owned the fact that I have this voice, and I think it can sound really cool over a fresh, more modern sound. I'm really proud of the sound I’ve developed.” Her trend-defying magnitude wasn’t the only thing keeping her otherwise occupied. Ponder was raised in Rochester, New York by an entrepreneur, which she says translated to “one week there was money, next week there wasn’t.” Her craving to experience a degree of security, combined with a conviction for the greater good, led her to a law career as a public defender before taking the leap to become a full-time singer-songwriter at 40. It’s a career path she still very much reveres.

“I have always been passionate about criminal justice issues since my brother was sentenced to 20 years to life when I was 16 years old,” Ponder says. “But it was taking a clinic in law school where I actually got to represent people. That’s when I knew I wanted to do direct service, and  public defense was the best way to do it.

“I was still singing with a band. We did an album and everything through law school. I just always felt like I didn't want to be struggling. I had this fear of financial instability, and so I just was like, I can't do music full time. But eventually it just pulled me.” Ponder continues to honor her roots on her debut album “Some Of Us Are Brave,” which she named after a particularly impactful book she encountered at law school. She notes the landmark 1986 work — a collection of writing by Black feminist authors — as one of the first books to tackle intersectionality, spotlighting the distinct experience of being both Black and a woman.

“The title alone inspired me, because … I just felt like I had never felt seen before I read that title,” Ponder explains. “There is a space we occupy as Black women that is unique to us. Our experiences that aren't often talked about in the feminist world, that aren't often talked about in the Black liberation world. That book was able to highlight those, and I just knew that had to be the title.”

Today, with “Some Of Us Are Brave” garnering rave reviews, a slate of national TV performances, and 2022 Best Of lists just around the corner, Ponder can’t help but be seen. This session is Exhibit A. Dig in deep on the dynamic video, and if you’re thirsting for more, satiate yourself with the extended audio cut featuring all six of the songs she brought to life in KCRW’s performance studio, including fan favorites “Someone Like You,” “Fray,” and her rendition of Radiohead’s “Creep.” Plus, hear more about her transition from the law to soul superstar, and how her twin pursuits continue to find ways of overlapping. She also shares the stories of her all-time favorite performance at Attica Correctional Facility, the Zoom with Q-Tip that led her to finally quit her day job, and why, “after 40 is lit!” Nation of Language: KCRW Live from The Village Studios Tears for Fears: KCRW Live from The Village Studios

Legendary new wave band Tears for Fears joins us at The Village Studios for a killer set spanning classics like “Mad World,” to standouts from their latest album, “The Tipping Point.” Say She She: KCRW Live from Apogee Studio

Brooklyn vocal trio Say She She celebrate the release of their debut album “Prism” with a funked-up, full-band get down at Bob Clearmountain’s legendary Apogee Studio. Dive in for lush performances from “Inside Problems,” plus the story behind the time Mariah Carey challenged him to a whistle-off. Hawthorne’s Cuco kicks off our Live From series with an intimate performance, and talks getting sober, his favorite TikTok audio, and his “psychotic” approach to musical reinvention.