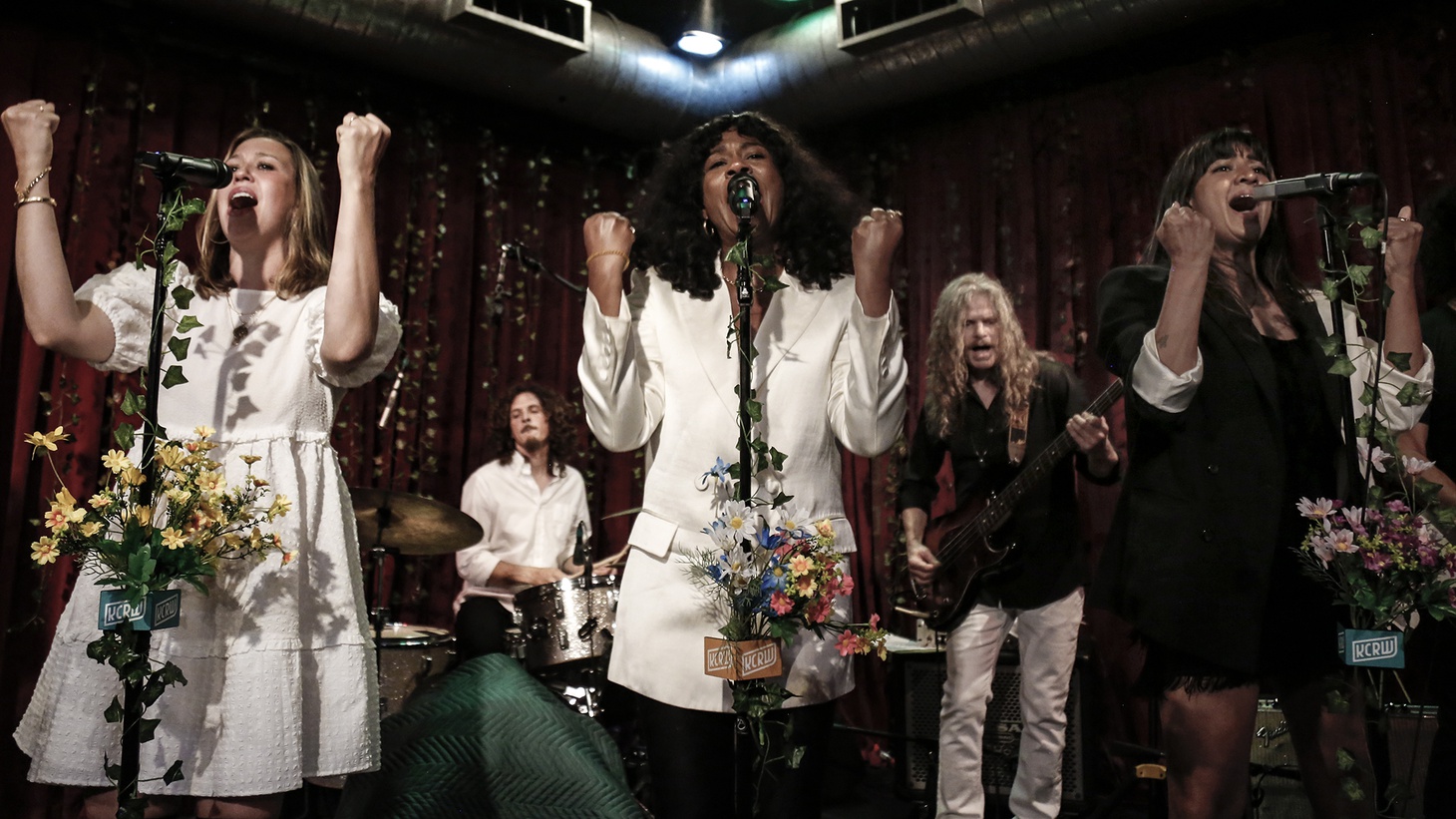 Brooklyn-based vocal trio Say She She brings a defiant spirit and some serious back-up to their KCRW Live From: Apogee Studio session.
Photo by Larry Hirshowitz.

Say She She: KCRW Live from Apogee Studio

It’s hard to believe that it’s been less than a year since the Brooklyn-based vocal trio of Piya Malik, Nya Gazelle Brown, and Sabrina Mileo Cunningham debuted as the soul-funk tour de force that is Say She She — and even more so considering that a chance encounter, courtesy of some thin apartment walls and late night vocal runs, brought the three pro singers together.

Their immediate chemistry led to late night writing sessions and subsequent jams with their most skilled musician friends (credits include Orgōne, The Dap-Kings, The Shacks, and Chicano Batman), resulting in one of the most funkily compelling debut singles in recent memory — February’s “Forget Me Not” b/w “Blow My Mind.”

Melding luxurious grooves, school-you melodies, skin-tight harmonies, and powerhouse songwriting, Say She She arrives on the scene as an artist fully formed; subsequent standalone singles and shows have served up explorations of funk, R&B, trip-hop, and discodelia, all steeped in their own future-forward je ne sais quoi.

Now, it’s album time. Ahead of Say She She’s debut LP “Prism,” out Oct. 7 via Karma Chief Records, the group joins us to celebrate with a knockout KCRW Live From session and interview. Lose yourself amidst the stratospheric high notes, show-stopping horn solos, and rhythmic abandon that the robust band brings to Bob Clearmountain’s legendary Apogee Studio. Malik, Brown, and Cunningham also join Morning Becomes Eclectic co-host Anthony Valadez for a candid conversation going deep on their commitment to activism, an abiding love for Chic’s Nile Rodgers, and the occasional upsides to apartment living. (L to R) Naya Gazelle Brown, Piya Malik, Bob Clearmountain and Sabrina Mileo Cunningham in the house that Clearmountain built around the mixing board that recorded Say She She’s hero Nile Rodgers. Photo by Larry Hirshowitz﻿

KCRW: Your origin story comes from the all-too-relatable experience of having a loud neighbor. Tell us about how you met and began working together.

Piya Malik: Sabrina and I lived in the same building, an old tenement building, really scruffy little studios above and below. We would hear each other so we knew each other were singers. I'd hear her early in the morning warming up, and she could hear me late at night so you can tell the difference in our personalities [Laughs]. One day she took it upon herself to come by and say, “Hey, you’ve got a great voice, but you’ve got to stop stomping around at 2 a.m. [Laughs]. But we became fast friends, and I already knew that she had this amazing high range. And Nya and I had been friends for years. We also started singing at each other the first time we met at this rooftop party. There were other singers involved that time as well, it wasn't just us.

Sabrina Mileo Cunningham: We wrote our first song together … maybe the third time we hung out? It just fell out of us, and there wasn't any intention to make the band, it was kind of just for fun.

Bob Clearmountain is recording this session using the exact same mixing board that he used to mix Chic’s classic “Le Freak.” What’s your connection to Chic and Nile Rodgers?

Malik: We named the band after him, in a way. Say She She is a homophone for “C’est Chic,” so it’s a little silent nod to him. We all read his autobiography at different points, and we've been blown away by his life and how humble he is. He overcame so much difficulty, and went on to just write for everybody … he’s genre-less, in some ways.

I think we were also so inspired by him. We all love singing, but we also love the writing process. It’s really something that we lean into, and so we kind of have him up there as a dream mentor.

What’s the story behind your protest song, “Norma?”

Nya Gazelle Brown: We were hearing that it was a possibility for [Roe vs. Wade] to be overturned. And we were in LA at the time, writing with our beautiful band, and it felt like we needed to stand up and say something. To use our voices, to make a statement that we will not go back. We were furious, we were sad, we were just all the emotions.

Malik: Yeah, it was actually three days after the [leaked draft of Supreme Court Justice Samuel Alito’s Dobbs vs. Jackson Women’s Health opinion, effectively overturning Roe vs. Wade] when it was starting to be reported more. We'd had time to mull, and we had a new writing day ahead of us. We were actually so distracted that we couldn't write anything else.

And you know … the song is not really our song, it's a protest song. The lyrics have been spoken by many people, not just women. We decided to donate the funds [from selling the single] to NARAL and Planned Parenthood, we put it up on Bandcamp as soon as we could. We've got a really supportive label that let us do that. And we were so grateful when you played it. You know, that was the first time it was ever played publicly so it meant a lot to us for you to share our voice. [Editor’s note: Malik is referring to the fact that “Norma” was played publicly for the first time during Morning Becomes Eclectic on Friday, June 24, the day that the Dobbs decision was officially handed down.]

We’re just around the corner from the release of your debut album, “Prism.” What’s the takeaway that you want people to have once they’ve heard every song?

Brown: Definitely that we stand for something … and that we make you feel good.