How Arlo Parks followed her musical instincts into ‘Sunbeams’ 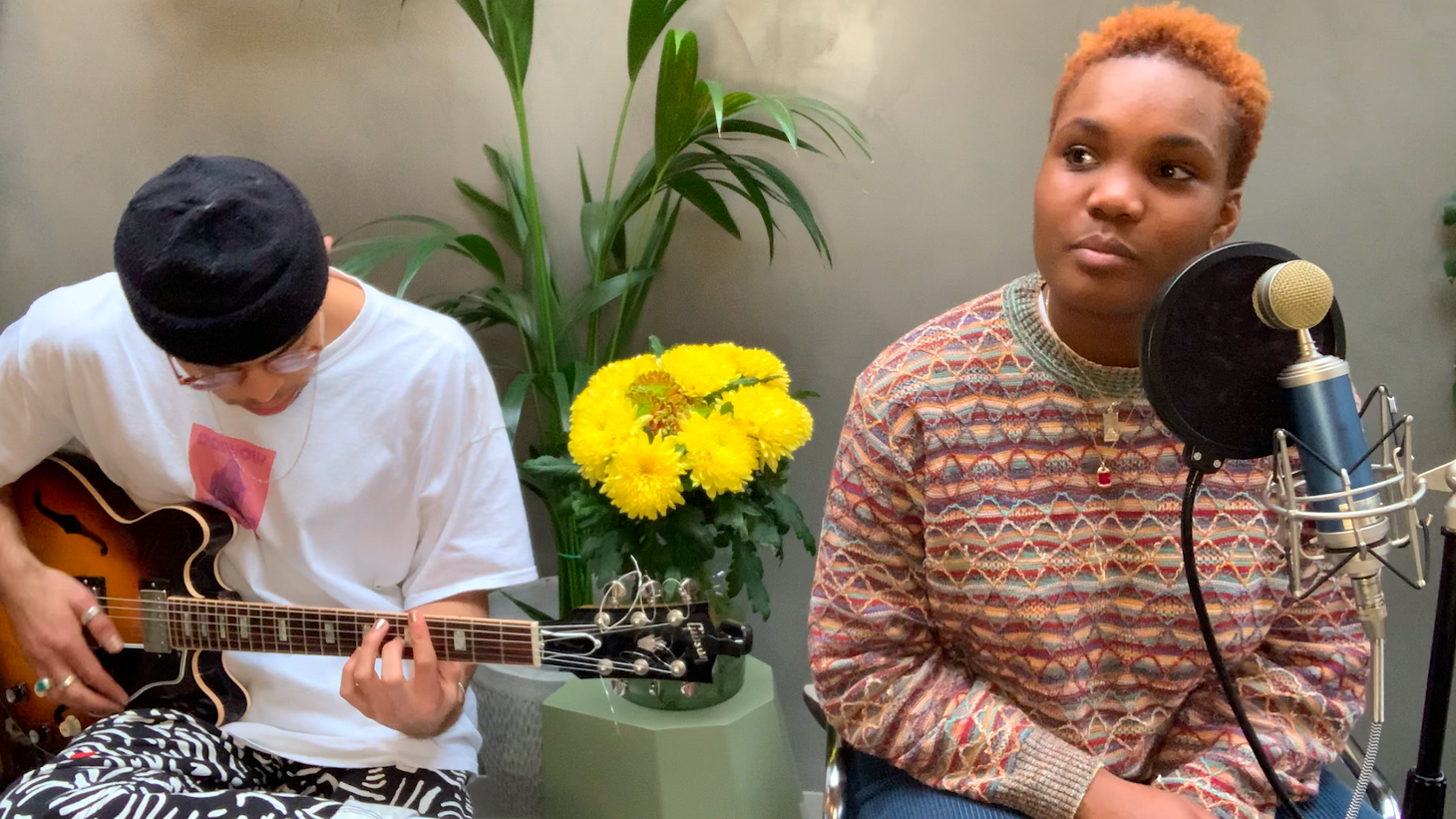 Arlo Parks, with guitarist Alex Blake, recording in London for KCRW. Photo courtesy of the artist

Arlo Parks is an incredible 20-year-old singer-songwriter, musician, and poet. She's been named a BBC Breakthrough Act and an Artist to Watch in 2021 by NPR. SPIN said of Arlo: "Her music has become an oasis for listeners who believe things will get better, even if they're not exactly sure how that will happen." Arlo is simultaneously cool and warm; wise and youthful; and a breath of the freshest air during a time when many of us find ourselves holding our breaths. Arlo's debut album, "Collapsed in Sunbeams," was just released on January 29, and it's absolutely divine.

Arlo Parks joined us for a conversation and an exclusive performance for Morning Becomes Eclectic.

NOVENA CARMEL: So, where in the world are you joining us from today?

NOVENA CARMEL: So, the new album: It's done, it's out. How do you feel sitting there surrounded by stacks of vinyl with your face on it, with your songs etched into the black record? I don't know if it's black, actually...

ARLO PARKS: It's purple … but yeah, it feels incredible. It feels so surreal. Because, you know, for the longest time, this record was just something that lived in my mind, in my dreams, in my thoughts. It was something intangible. And then to have it physically in my hands like that, especially as somebody who loves vinyl and collects it, was really special.

NOVENA CARMEL: I'm a musician myself, and I always wonder: how do you know when a song is done, or when your album is done? What was the point at which you were like, "Okay, I don't need to rearrange anything. This is the order of the songs. I don't need to add any more BVs [backing vocals]." How do you know?

ARLO PARKS: I mean, for me, it's very instinctive. And I think I'm lucky that I have that, because honestly, I just know. And I know that sounds so vague to say. But with all the songs on the record, there was a point where I listened back and I just felt in my body, I was like, "This is exactly how I wanted it to sound." And as soon as I get that feeling, I just leave it, because I think that when you start tinkering and pulling things apart, then you kind of lose the magic, and you can do it forever.

NOVENA CARMEL: It sounds like you're really centered and guided by your intuition, in a sense. I know a lot of people have practices and ways that they hone in on their intuition. Do you have anything like that?

ARLO PARKS: I mean, for me, I guess meditation would be one. Also, I like to journal. And that allows me to have a period of time every day where I just sit with myself, and I'm just present in my body with how I'm feeling. And then I can reflect back on those moments. But honestly, it just comes from practicing that when I feel something is right or not, [and] just trusting that.

NOVENA CARMEL: That's beautiful. So, you sing and you play multiple instruments, right?

ARLO PARKS: Yeah, yeah. So, I grew up playing classical piano, and I had lessons, and then I picked up the guitar when I was a little bit older.

ARLO PARKS: I think it was probably writing. I started writing short stories from the age of about seven or eight. And I have always had that gravitation towards reading books, even just the way words looked. I remember being very young and having an affinity for them. So that was definitely my first creative endeavor.

ARLO PARKS: Yeah, I definitely think so. I think even down to my taste in music. I was listening to Pixies, I was listening to The Stone Roses, and everyone kind of looked at me a bit like, "Oh, but you're listening to that music? Why are you listening to that music? That's not..." you know, and all that kind of stuff., Even expectations of the kind of music I would make. I would say, "I make music," and people would immediately be like, "Oh, so you do R&B?" And I think the way that that shaped me is that I basically trusted my tastes completely and refused to fit in. Not saying that R&B is necessarily bad, but you know that assumption annoyed me because I was like, "I can make whatever I want." And I think that spurred me to be completely myself, and to make the art that I liked, because you can never be liked by anybody. Anyway, I think that's what I took away from it.

NOVENA CARMEL: I was thinking about the idea of genre, and how folks try to place artists in genre boxes. Especially I feel like that happens with a lot of Black artists, where they automatically think "R&B or soul." And it's like, there are so many more ways to look at this. So that's amazing that you were able to, at a young age, go inside and realize that you had your own vision for what you were and who you are.

ARLO PARKS: Yeah, I mean, when you're younger, you want to be cool, and you want to fit into molds and be part of something. And I just realized that my love for music goes beyond that and transcends that. And if I try and cater to what other people think I should be doing, then I won't be happy, and they'll probably end up not liking it anyway. So what's the point?

NOVENA CARMEL: Your songs are just so relatable, and there are elements of joy and fun and being out in the world and being yourself. Then there are also references to challenges, and I'm sure that so many people reach out to tell you how much your music means to them, and maybe helps them get through different things. I'm curious how that feels to you to go from writing music for yourself to [how] it's become something that's for other people in this profound way.

ARLO PARKS: I think it definitely took some adjustment, but in the best way, you know. Because I was so used to making music, and maybe I would show it to one of my friends, and maybe my mom and my little brother, and that was kind of it. And then I remember writing in my journal when I was 13, and being like, "I just want one person who isn't my friend or my mom to say that my music has touched them in some way." And now that's happening on such a big scale. I remember re-reading that and being like, "Wow, if you'd only known how big things would get." And it feels like I'm having a tangible, positive effect on people's lives through art, which is something so fluid and subjective. So it feels good.

ARLO PARKS: I think that I basically just folded into myself -- not necessarily in a bad way, but thought, "Okay, who do I have that's in London that I can collaborate with safely? What do I have within me that I can bring to the table?" And I think it really made me sit down and ponder what messages I wanted to put forward with this record. And even in the past few weeks, it's just me. So I've been making beats, I've been writing songs, I've been demoing by myself, I think it's just important to take stock of the tools you have at your disposal, for want of a better word, and just do it, essentially.

NOVENA CARMEL: Yeah. Have you gained any new music skills? I know, Madison McFerrin, for example, She was like, "This is a great opportunity. I've been producing more than ever before. I'm learning how to produce." Are there any new music-making skills that you've gained?

ARLO PARKS: Yeah, I've been producing a lot. I've been learning how to program drums properly. I taught myself to DJ. And yeah, production is a big one for me, because I've always wanted to produce or co-produce a project, so that's something I'm working towards.

NOVENA CARMEL: So you've got your album out, and as if you weren't busy enough, you've got a television show. What is it called, and what can viewers expect?

ARLO PARKS: It's called "Tonight with Arlo Parks" -- very imaginative. And it's essentially a one-hour variety show where I sing songs from the album, and I travel through all these different sets. I interview Dave from Glass Animals and Romy from The xx, and my friend Dave Okumu also plays guitar. So it's basically a journey through the world of the album. And it's coming out on Amazon Prime. It's part of my "up next" campaign with them, and they were very kind to make it a reality for me.

NOVENA CARMEL: Is it a one-off show, or is it a series that's gonna continue?

ARLO PARKS: Oh, it's a one-off show. But there may be an Episode Two if people like it.

NOVENA CARMEL: And you also dip and dive a little bit into fashion.

ARLO PARKS: Yeah, yeah. In 2020, I did a campaign with Gucci that was directed by Gus Van Sant and [Gucci creative director] Alessandro Michele. And that was one of the highlights of my career, because it was so outside of my comfort zone in the best way. I had never done anything like that ever before. And it really made me interested in the fact that, you know, I co-directed a short film for them as well. And the fact that the arts are so interconnected -- fashion, music, writing, acting. It's really exciting, to be honest.

NOVENA CARMEL: I have one more question for you before we wrap up today. It's probably the most important question: Cake or pie?

ARLO PARKS: Cake. 100%. Not even a hesitation. I barely even hesitated.

ARLO PARKS: Just because it's the best, obviously.

NOVENA CARMEL:  Definitely. Actually, I want to ask you another question. What are you looking forward to this year?

ARLO PARKS: I think I'm looking forward to playing live the most at some point, whenever that may be. I've never played in the States; I've never even done a London headline show, where I live. And there's so much to be experienced in that way. And I think this album is one that's meant to be collectively experienced with other people. So that's what I really want to do this year.

NOVENA CARMEL: Arlo, thank you so much for joining us today. Congratulations on your album, your television show, and all of the things that are coming up for you. I think there are infinite possibilities we can expect, so we're really excited about your career and your music here at KCRW.

ARLO PARKS: Thank you. Thank you for having me on the show.