Bob Marley: So Much Things to Say Remember the old joke about involvement and commitment? It goes like this: What’s the difference between ham and eggs? Answer: With eggs, the chicken is involved. With ham, the pig is committed.

Roger Steffens’ new book, So Much Things to Say: The Oral History of Bob Marley, reveals that the author is the proverbial pig in this scenario. In the recent New Yorker article “Manufacturing Bob Marley,” writer Hua Hsu doesn’t call Steffens a pig but rather a “monomaniacal nerd.” I am inclined to agree. Anybody who would interview over 100 friends and family of the late reggae icon, generating over 700 pages of text, (the final book was slimmed down to 400 pages) is driven if not obsessed. And as it turns out, even Sisyphean: Steffens’ hard drive crashed part way into the project and he had to transcribe many of the interviews a second time. Now that’s commitment.

Roger Steffens is a, if not the, world authority on the music of Bob Marley and reggae. He has presented Bob Marley’s music all over the world, has written and co-written six other books on the subject, and his work has been consistently praised by top roots reggae artists over the decades.

The new book is the most ambitious study of Marley’s life and music yet, told not by music critics or journalists but by the people who knew, loved, and even hated him. We find out why the Wailers (Bunny Livingston, Peter Tosh, and Marley) broke up. We learn about Cindy Breakspeare, the woman who inspired the hit song “Waiting in Vain.” We also get the inside story of his fraught marital relationship with Rita Marley, how Marley was teased as a ‘little yellow boy” because of his mixed blood, and how Marley’s white father was a compulsive liar who ended his life in poverty on a pension of $1.20 per week.

So Much Things to Say debunks many myths surrounding Marley, such as the claim that the C.I.A. was behind an assassination attempt on his life. We read about Marley’s soccer injury, which eventually led to the discovery of the melanoma cancer that took his life in 1981 at just 36 years of age. Bob sought treatment at the end of his life with the alternative medicine German, Dr. Josef Issels, who once was a Nazi doctor imprisoned by the Third Reich. The book is rich in detail and new facts, and is a must-read for Marley fans.

To conclude, I must note that Roger Steffens was a big player at KCRW during the decade I served as music director of the station (1979-1990). He co-hosted The Reggae Beat, which became, according to the L.A. Weekly, “the most popular non-commercial show in L.A.” He inspired African music programming in 1980 with Morning Goes Makossa, which I co-hosted as part of KCRW’s weekday show Morning Becomes Eclectic. His skill at fundraising was unmatched. Steffens sent the cassette tapes to Paul Simon that later inspired the hit album Graceland. He also runs Roger Steffens’ Reggae Archives, the biggest private archive of Marley and reggae memorabilia in the world, filling seven rooms of his home in Echo Park. Finally, Steffens’ daughter Kate curates The Family Acid on Instagram, featuring over 50 years of her dad’s counter-culture photography. 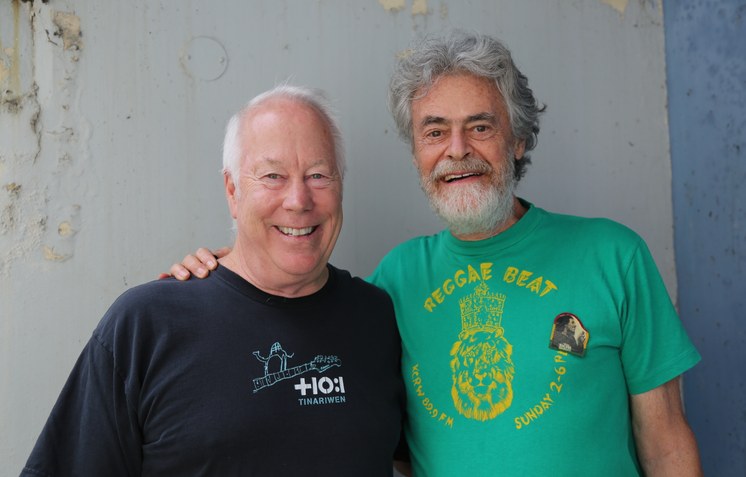