When I listen to music, I’m looking for originality and high-quality musicianship. Rachel’s music is all that and more. For one thing, she plays three different instruments and excels at each one. (But she’s not a jack-of-all-trades kind of artist.) Her piano technique compares with the best, and her compositional sense as well. She is a fine flute player with a classical tone, plus she plays delicate acoustic guitar and a mean electric one, too.

Rachel Flowers was born in 1993 in San Diego and now lives in Oxnard, California. She was born 15 weeks premature, with a birth weight of one pound five ounces. At three months of age, she lost her sight due to something called Retinopathy of Prematurity, apparently not uncommon for extremely premature babies. At four, Rachel started her music education at the Southern California Conservatory of Music (SCCM) and at the Academy of Music for the Blind. At the SCCM’s Braille Music Division she learned Braille Music Code and other adaptive computer music applications.

Rachel’s story goes beyond all this, however. Early on it became evident that she possessed a rare, almost uncanny gift for music, and she worked incessantly to maximize her extraordinary talent. To say the odds were against her is putting it mildly. Like Michel Petrucciani, Art Tatum, and Lennie Tristano—three great pianists who have transcended physical disabilities—Rachel has become not only an original and stellar keyboard master, but a superb flutist and guitarist as well.

On this week’s Rhythm Planet program, Rachel joins me in the studio and performs music by Ahmad Jamal, Herbie Hancock, Claude Debussy, as well as several originals. Rachel was once told by Herbie Hancock himself that she was the only person that ever got a particular chord sequence right in his evergreen song “Dolphin Dance.” High praise indeed.

Lorenzo Destefano’s intimate and moving portrait about Rachel, Hearing is Believing, premieres tonight in Los Angeles at Laemelle’s Music Hall in Beverly Hills and will run through Thursday, June 22. Hearing is Believing also premieres in New York City tonight at Cinema Village. It is an inspiring film as well as an artistic triumph. Click here to watch the trailer. 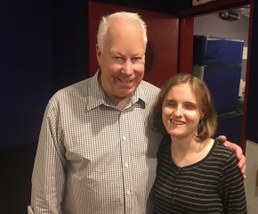