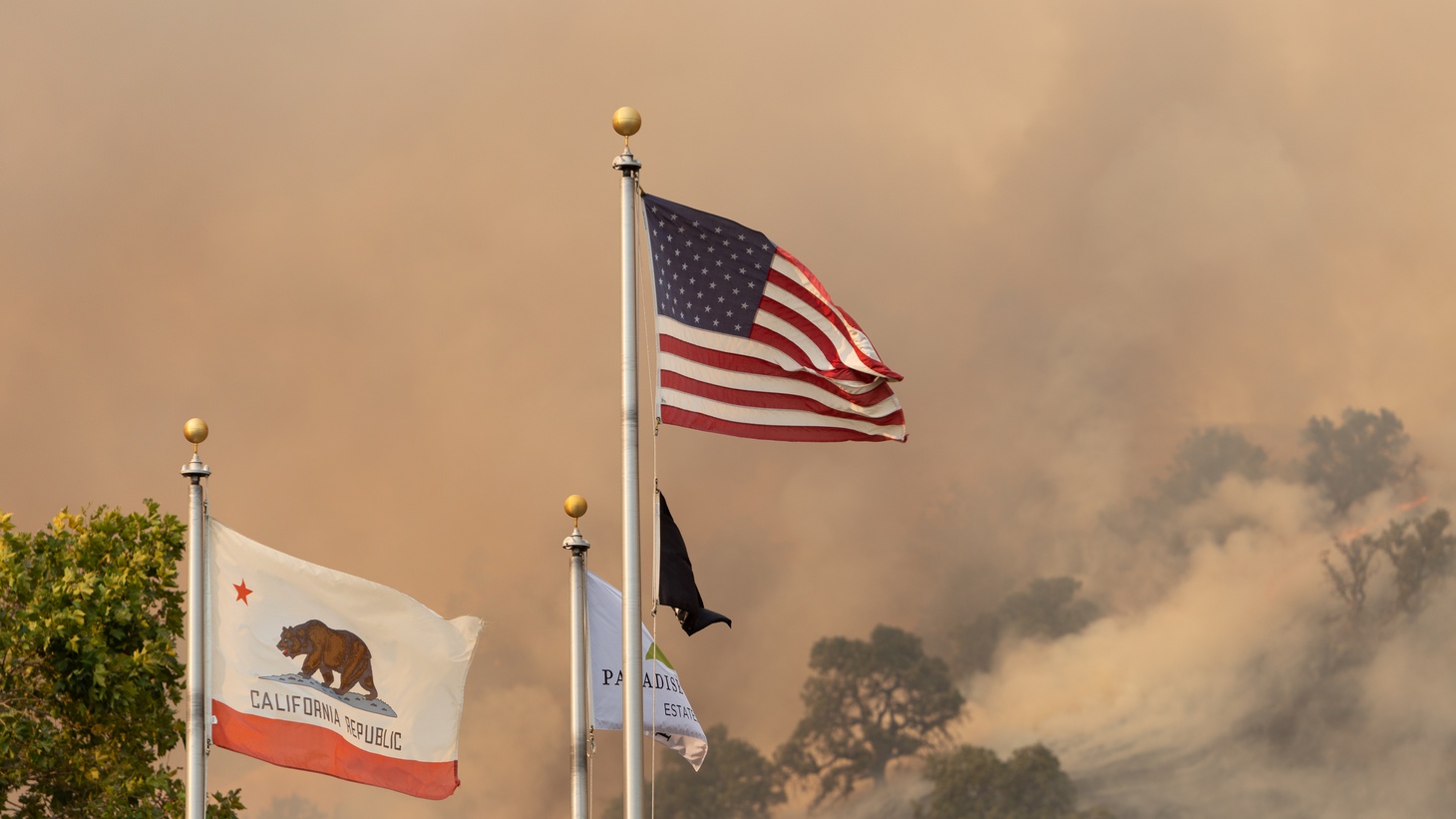 Smoke from a wildfire behind the California state flag. Photo by Shutterstock.

From housing and health to transportation and education, the Legislative Analyst’s Office report provides a litany of sobering climate change impacts for California legislators to address as they enact policies and set budgets.

Painting alarming scenes of fires, floods and economic disruption, the California Legislature’s advisors today released a series of reports that lay out in stark terms the impacts of climate change across the state.

The typically reserved, nonpartisan Legislative Analyst’s Office outlined dire consequences for Californians as climate change continues to alter most aspects of daily life. Much of the focus of the six-part series is detailing the economic cost as the changing climate alters where and how Californians build, grow food and protect the most vulnerable residents.

The report’s unsaid but unambiguous conclusion: Climate change could alter everything, spare no one in California, so legislators should consider preparing for sweeping impacts.

“These hazards will threaten public health, safety, and well-being — including from life-threatening events, damage to public and private property and infrastructure, and impaired natural resources,” the reports say.

Scientists say it’s not too late to stop the most severe effects, although the clock is ticking. Technologies and other solutions already exist to reduce greenhouse gases from fossil fuels and other sources and prevent more irreversible harm, according to a landmark international scientific report released Monday. But international accords and plans continue to fall far short, with emissions expected to keep increasing.

California’s legislative analysts did not conduct new research; instead, they compiled existing data and projections, providing a comprehensive clearinghouse for legislators as they enact policies and approve budgets.

State Sen. Bob Wieckowski, a Democrat from Fremont and chair of the budget subcommittee on resources, environmental protection and energy, said he plans to turn to the reports as references and rationale for the subcommittee’s budget proposals.

“It’s impressive,” he said. “(It) turns the climate conversation into an all-hands-on-deck versus, ‘Oh, this is just some tree hugger over here.’”

The analysts make no explicit policy recommendations but they advise legislators to consider such questions as: How can the state avoid exacerbating climate impacts? How can lawmakers protect the most vulnerable Californians? And how should California pay to prepare and respond to climate change?

Assembly Speaker Anthony Rendon, a Democrat from South Gate, asked the Legislative Analyst’s Office to assess the impacts of climate change on a variety of policy sectors, and the reports grew from there. They frame climate change as a complex, multi-disciplinary problem that requires response from all of the state’s agencies.

Project manager Rachel Ehlers said the aim is to assist lawmakers incorporate climate change into decisions outside of traditionally environmental realms, including housing, health and education. For instance, would a new housing policy “have the potential to inadvertently worsen climate change impacts?” she said.

The reports come in the lead-up to California Gov. Gavin’s Newsom’s May revision to his January budget blueprint, when the administration can reframe and update its proposals. Thus far, the proposed budget included more than $22 billion for climate change efforts that include protecting communities against wildfires and extreme heat.

Despite the state’s climate-forward reputation, critics and many legislators note that California’s follow-through has been inconsistent.

“I don’t at all feel that we are leading the world anymore,” Rendon, a Democrat from South Gate, told CalMatters last year.

Despite the passage of a $15 billion climate budget, California Environmental Voters, an advocacy group, gave the state its first “D” grade for what it called its climate inaction last year.

“We’re plagued by ‘climate delayers’ in Sacramento – members of the Legislature who talk about climate change but don’t back up those words with action,” CEO Mary Creasman wrote in a CalMatters commentary.

Last month, a coalition of California’s environmental justice advocacy organizations pushed for a phase-out of fossil fuels, and warned that clean air regulators have failed to adequately consider public health in crafting the state’s blueprint for curbing greenhouse gas pollution.

The analysis made clear that many of the worst consequences are already here, even as it noted that future impacts are coming sooner and may be worse than scientists had predicted.

Summer temperatures scorched records as the state’s second-largest wildfire tore across Northern California during the third-driest year on record for rain and snowfall. California must brace for yet more climate hazards, the reports warn, from extreme heat to more severe wildfires, whiplash from drought to flood and sea level rise along the coast.

Drought clutches California and a statewide heat wave forecast for Wednesday is poised to sap the remaining snowpack that supplies about a third of the state’s water. California’s firefighting arm warns that a record-dry start to the year could spell a devastating fire season ahead.

It’s a disaster drumbeat Californians have heard many times before. The Legislative Analyst’s Office has released report after report assessing the state’s climate policies and spending. It has warned that sea level rise will submerge billions of dollars in homes, roads and businesses by 2050, and that the state must accelerate planning to protect state assets including college campuses, prisons and even state workers from soaring heat, flooding, fire and extreme weather.

Newsom’s administration launched a preemptive response to the reports, with the Monday release of its updated climate adaptation strategy. The guidelines pull together plans from 38 departments and address priority issues, such as protecting communities vulnerable to climate change and combating risks to health and safety.

California Natural Resources Secretary Wade Crowfoot said the strategy is “a matter of protecting our residents and our communities or natural places from climate threats that are already here.”

State officials regularly recalibrate the official response to climate change, often in response to dire reports. Four years ago, California’s Fourth Climate Change Assessment released under former Gov. Jerry Brown warned that climate change would lead to death and property damage on the order of tens of billions of dollars by 2050.

Though today’s reports were focused largely on how California must adapt to the ravages of climate change, the Legislative Analyst’s Office has also warned repeatedly that California’s landmark greenhouse gas market, cap and trade, will fail to meet California’s goals to reduce emissions.