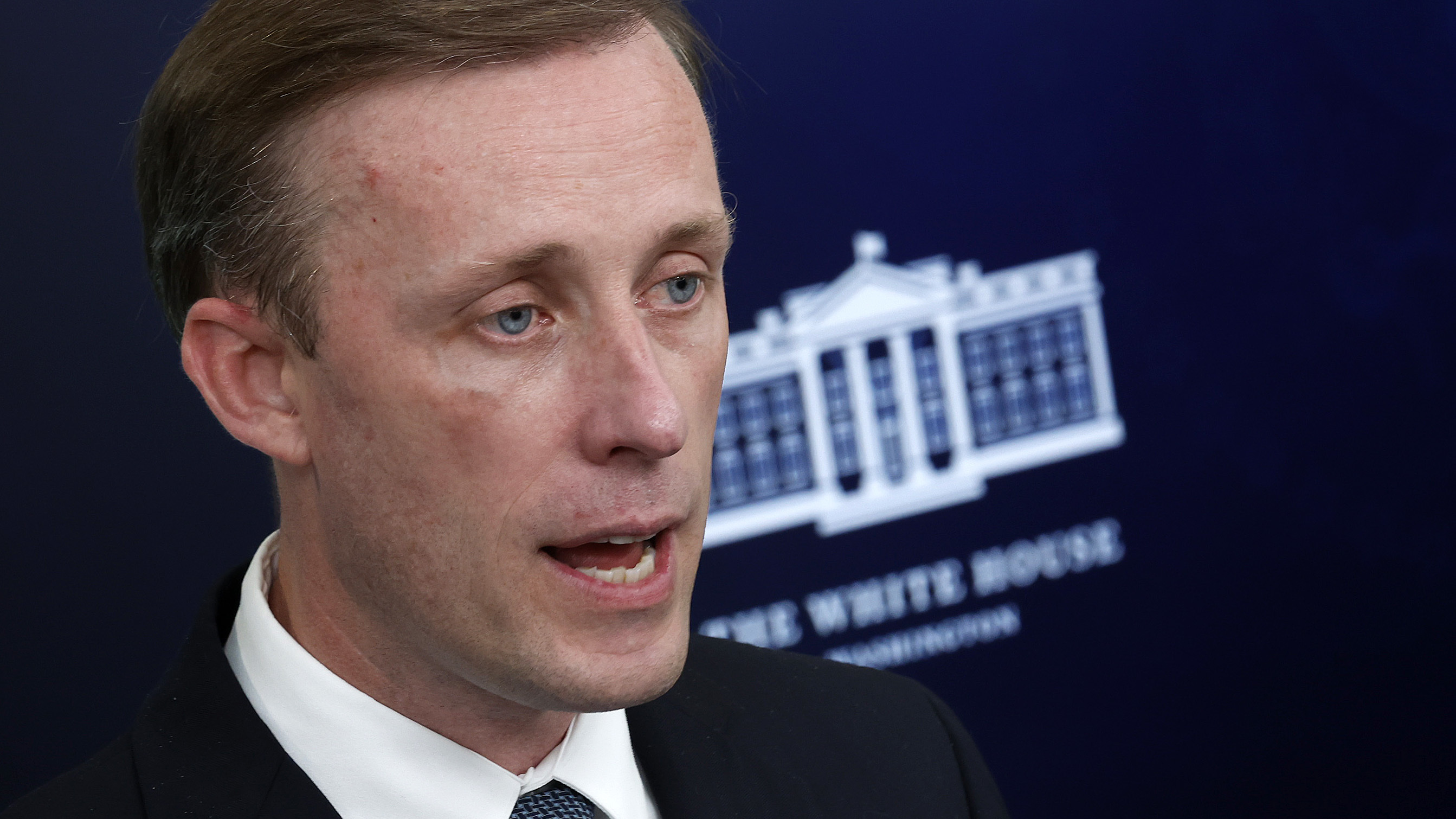 China is escalating tensions with the U.S. after House Speaker Nancy Pelosi visited Taiwan this week, but the White House will not be deterred in defending its interests in the Western Pacific, according to the president's national security adviser Jake Sullivan.

It has been a busy few days for Sullivan as President Joe Biden navigates complex issues on multiple fronts.

Alongside Pelosi's trip, there is the ongoing war in Ukraine, and the U.S. drone strike that took out al-Qaida leader Ayman al-Zawahiri in Kabul.

Sullivan sits down with NPR's Mary Louise Kelly to discuss the past week and how the administration plans to address each issue.

This interview has been lightly edited for clarity.

Well, the Chinese have announced that they are going to conduct a series of military activities around Taiwan over the course of the next few days, and that will raise tensions across the strait. It will create risks and challenges, we think unnecessarily. And so what we are hopeful for is that the PRC acts responsibly and avoids the kind of escalation that could lead to a mistake or miscalculation in the air or on the seas. That is the message that we're sending to China. That's the message we're also coordinating with our friends in Taiwan.

On how risky this situation appears

Look, whenever a military engages in a series of activities that include the possibility of missile tests, of live fire exercises, of fighter jets buzzing around the skies and ships moving around on the seas, the possibility of some kind of incident is real. And we believe that what China is doing here is not responsible. We believe that it is escalating tensions unnecessarily. And this is particularly so because what the speaker did in visiting Taiwan is not unprecedented, it is not threatening to China, it is not out of the historical norm.

Members of Congress travel there all the time, and a speaker of the House has previously traveled there as well. So what we don't want to see is China trying to twist this into a crisis or use this as a pretext to take the kind of military activity that will ultimately destabilize the Taiwan Strait.

On whether some good can come from the visit, and the U.S. signaling to China that it won't back down

Look, from the U.S. government's perspective, from the Biden administration's perspective, what's most important are the set of actions we take, the substance. And that includes what we do to support Taiwan's self-defense, that includes how we work with our allies and partners on initiatives like AUKUS — the nuclear submarine initiative we have with the UK and Australia — it matters what our force posture is in the region, and it matters the extent to which we are communicating to China that we are going to stand up for our interests.

Whether a particular visit sends the kind of message you're describing, I'll let others make that determination. From our perspective, the most important thing for us to do is through diplomatic, economic and military policy, substance. We communicate quite clearly to China that we are going to defend our interests and our values in the Western Pacific.

On what comes next, and whether the U.S. watches the military drills play out and see what happens

On whether the U.S. will get involved militarily to defend Taiwan if it comes to that

Well, our policy has not changed. It is rooted in the One China policy informed by the Three Joint Communiqués, the Taiwan Relations Act, and the Six Assurances.

The president himself has said the policy has not changed. The president is the commander in chief. He's the guy who sets the policy and he has said it has not changed. And we have communicated that very directly. He has said that publicly on the record. And to the question of the kind of military contingency you're talking about, it is the entire object and purpose of our approach to ensure that that never happens, that it never comes to that. And that is what we are going to keep working to ensure.

On whether it was a CIA drone that killed al-Qaida leader al-Zawahiri in Afghanistan, and where it flew in from

All I will say is that our counterterrorism professionals and our intelligence professionals played a central role in carrying out this successful operation at the president's direction, and he credited them in the public remarks he made for their incredible skill and capacity in pulling this thing off.

I'm not going to get into those kinds of operational details [on where the drone flew in from]. I think it's important that we be able to preserve the space to continue to operate effectively, to demonstrate, as the president promised the American people a year ago, that we would maintain the ability to take out terrorists even without thousands of American forces on the ground. We did that once, we're prepared to do it again.

No. There was unanimous support among his senior national security team to take this action at the point in time when the intelligence community briefed the president that they had high confidence that this was al-Zawahiri and that they could do it in a way that they felt would not result in civilian casualties.

On what al-Zawahiri's presence in downtown Kabul says about what the U.S. achieved during the 20-year war in Afghanistan

Well, actually the record, when it comes to our disruption of the al-Qaida network and its capacity to threaten America and Americans, is a record of significant success. Our ability to ensure, over the course of decades, that the kinds of complex plots that led to the embassy bombings in Nairobi and in Tanzania in 1998, that led to the USS Cole in 2000, and then of course to 9/11 in 2001, that we have not seen those kind of plots over the course of the past two decades be carried out against the U.S. homeland — that is a record of significant success.

What I would tell you is that Ayman al-Zawahiri became the emir of al-Qaida in 2011 when Osama bin Laden was taken off the battlefield. That was more than a decade ago. For a decade, American men and women fought and died in Afghanistan and Zawahiri was alive and running al-Qaida. Joe Biden took the United States out of Afghanistan so that in the year 2022 not one American soldier died in Afghanistan. And Ayman al-Zawahiri is dead. I would call that a pretty effective policy.

We believe that senior members of the Haqqani network, who are now part of the Taliban entity running the government in Kabul, that they knew. We also believe that there were other senior Taliban officials who did not know. And in fact, you know, we will now watch to see the extent to which this raises questions within the organization of the Taliban about the wisdom of having al-Zawahiri come back into Kabul.

Yeah, I don't want to go so far as to say fracture. But, you know, certainly this is going to raise some eyebrows, we believe, within the leadership.

Well, we should be encouraged because it does mean that the possibility of substantial amounts of wheat and corn and other grains getting out of Ukraine is a real possibility. But we should also be cautious, because there is every reason to believe the Russians are going to make this as difficult as possible and that they are going to continue to find ways to disrupt the flow of grain to the world market. And so we think that the international community has to maintain a substantial amount of pressure on Moscow not to enforce a blockade, not to throw up obstacles to the flow of that grain, because it is so important to feed the world, to keep prices down and to ensure that there's not hunger and famine in Africa in Southeast Asia and other places.

I wouldn't go so far as to say it's a triumph, but I would say this is a good step forward. It should be built on and there should be many steps that follow what, for our part, the United States is trying to do to ensure that these ships coming in and out can have the insurance they need, that there is no challenges with them being able to get the grain to the world market. And we're going to keep doing our part to get as many of those ships in and out of there as we possibly can.

You just have to listen to President Biden when he talks about Presidents Zelenskyy. He openly admires president Zelenskyy, admires his courage, his bravery, his skill, his stewardship of a country at a time of absolute crisis. The two of them talk regularly. They have incredibly constructive and effective communication. And then at all levels of the government we are deeply engaged. And so this is a very strong partnership between the Biden administration and the Zelenskyy administration, and it is because of that partnership that we have been able to effectively provide them with the military, economic and humanitarian support that they need, and we're going to keep doing it.

For the record, I believe that Ukraine's leadership is leading a country in an incredibly effective and brave way against the onslaught of an invading neighbor and doing so defying all expectations about what they would be able to hold together and stand up against. And it's been an incredibly impressive thing to watch.

I'm not going to make predictions about six months from now, because I think most of us wouldn't have predicted we'd be where we are today six months ago. We did accurately predict that Russia would invade, but how exactly that invasion would unfold is subject to so many variables and that's true for the six months that lie ahead of us. What I will say is this: Russia could end this war tomorrow if they simply withdrew from the territory that they have tried to conquer by force, which is against every precept of international law. And so Putin could end this thing very rapidly. Our job as the United States is to put Ukraine in the best possible position on the battlefield so that it will end up in the best possible position at the negotiating table. When can we get serious negotiations going? That is an open question, because at the moment it does not seem the Russians are serious about the kind of diplomacy that actually could bring about an end to this conflict.