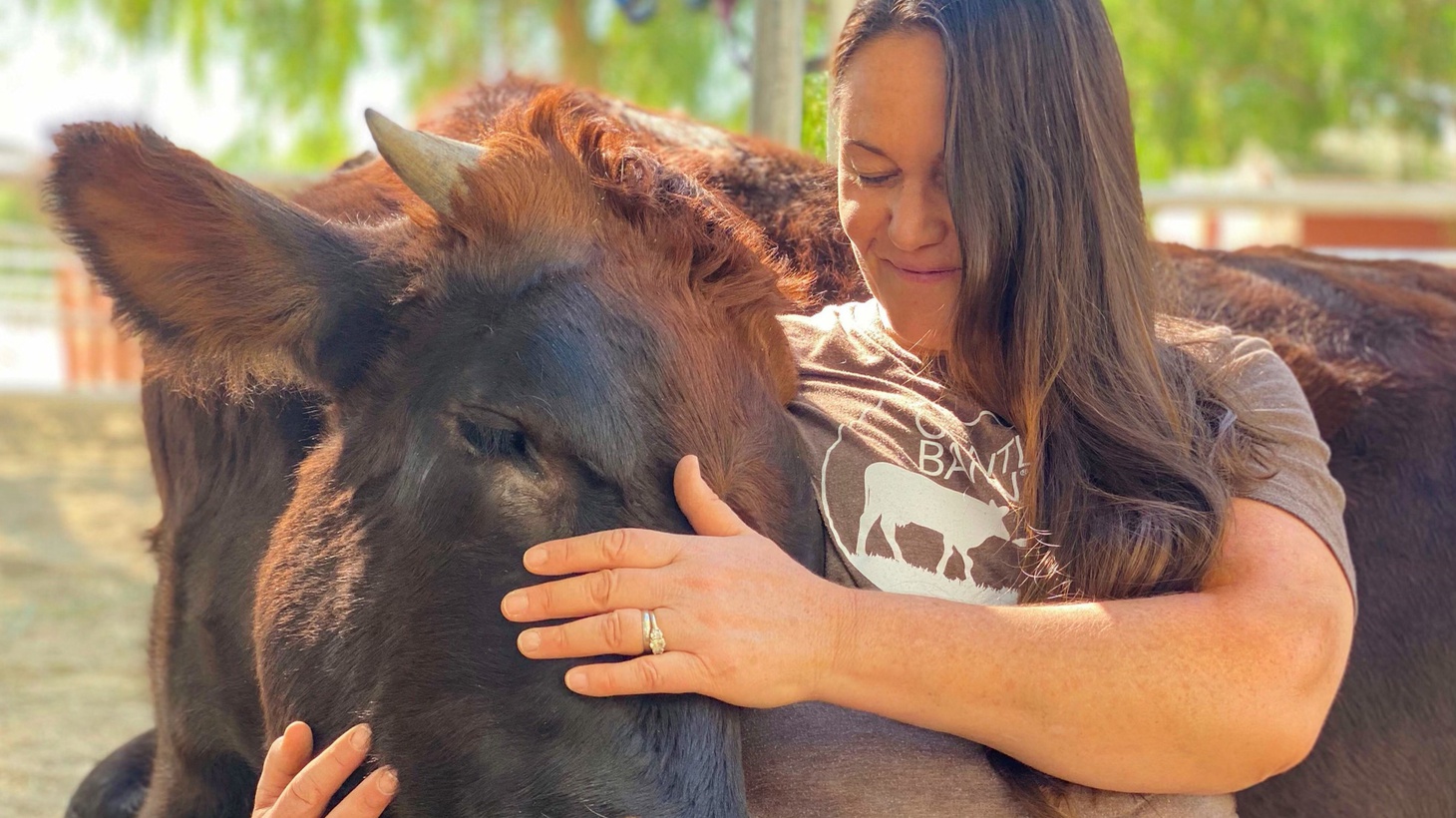 The Gentle Barn has rescued thousands of farm animals that have nowhere else to go since Ellie Laks first founded it in 1999.

But Laks points out that these rescue animals give back to people too.

“Part of the original design of The Gentle Barn is not just to have a home for animals that have nowhere else to go, but to partner with them when they're ready to heal people with the same stories of trauma,” says Laks, who studied special education and psychology in college.

Visitors can hug cows, rub pig tummies, and chat with a goat or two.

In the upper barnyard, there are sheep, chickens, turkeys, a peacock named Tivoli, three llamas, and an emu named Earl.

It may be winter in Southern California, but in Australia and New Zealand, where emus come from, it’s summer, which means mating season. Earl is feeling flirtatious. He circles visitors in a friendly, curious way.

“He's checking you guys out, trying to see which one of you would like to go on a date with him,” says Laks. 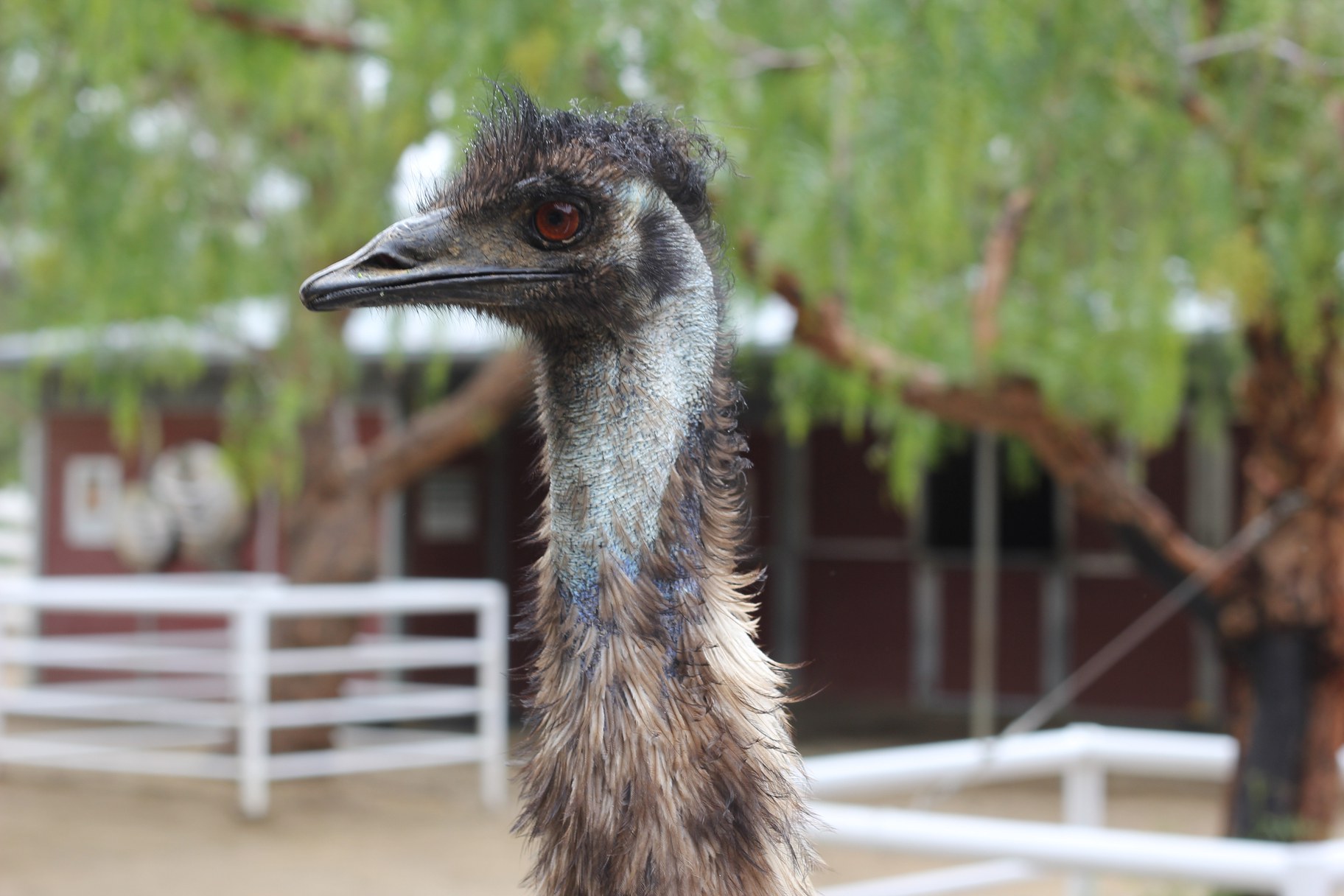 It’s summer in Australia where emus come from, and Earl is feeling flirtatious. Photo courtesy of The Gentle Barn.

In a shaded area lie two pigs named Honey Bear and Tinsel. They were rescued when they were piglets, along with their mother and four other siblings. Now 2 years old, Honey Bear weighs 1,000 pounds and loves tummy rubs. He grunts his thank yous. 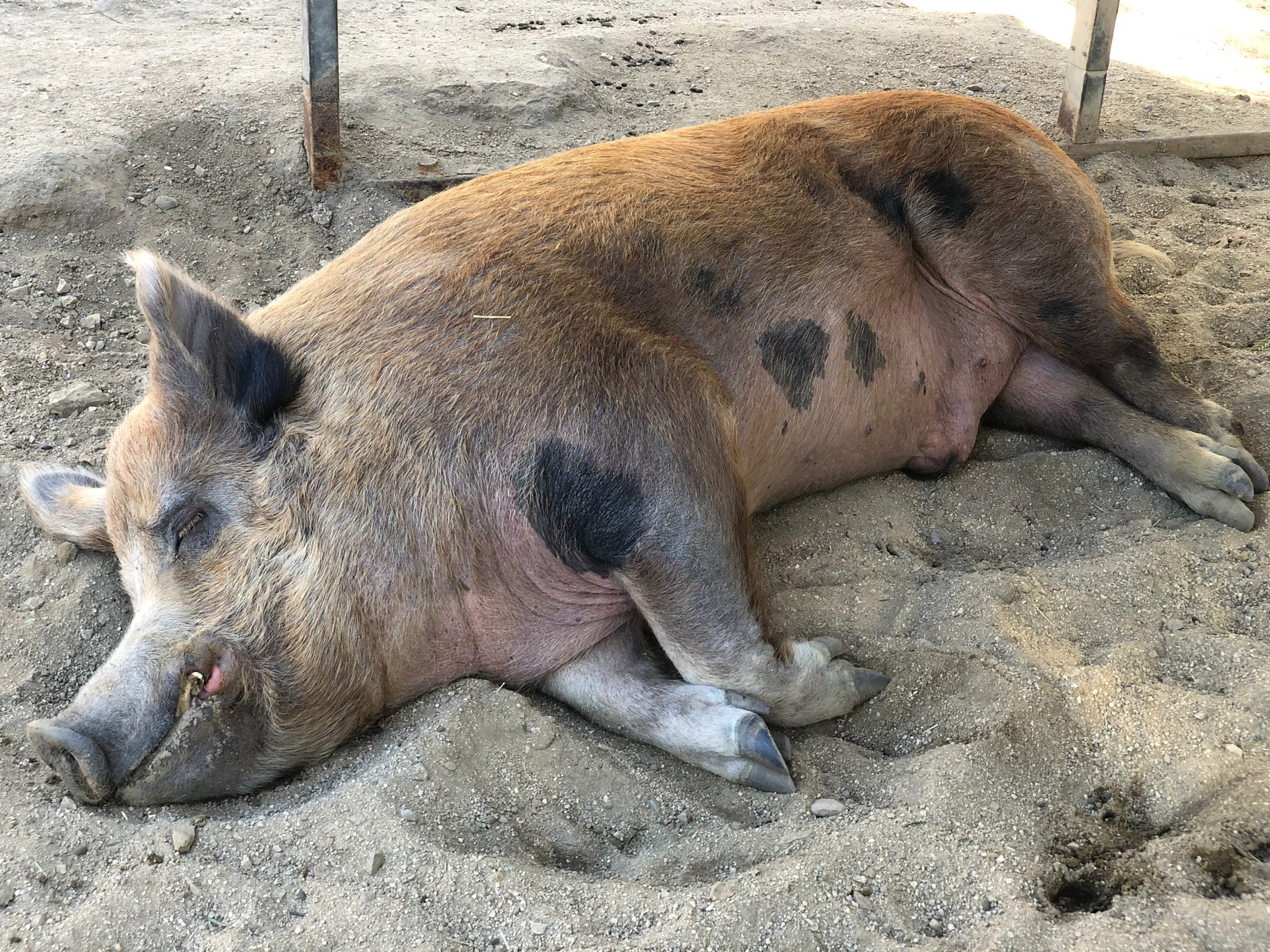 Honey Bear weighs about 1,000 pounds and likes to have his tummy rubbed. Photo by Christian Bordal.

Sun, the cuddle turkey, likes to be stroked under her wings.

“We rescued her from Thanksgiving,” says Laks. “She was really scared of us at first. But with time and lots of patience, she learned to trust us and then one day, she just came right up and fell asleep in our laps.” 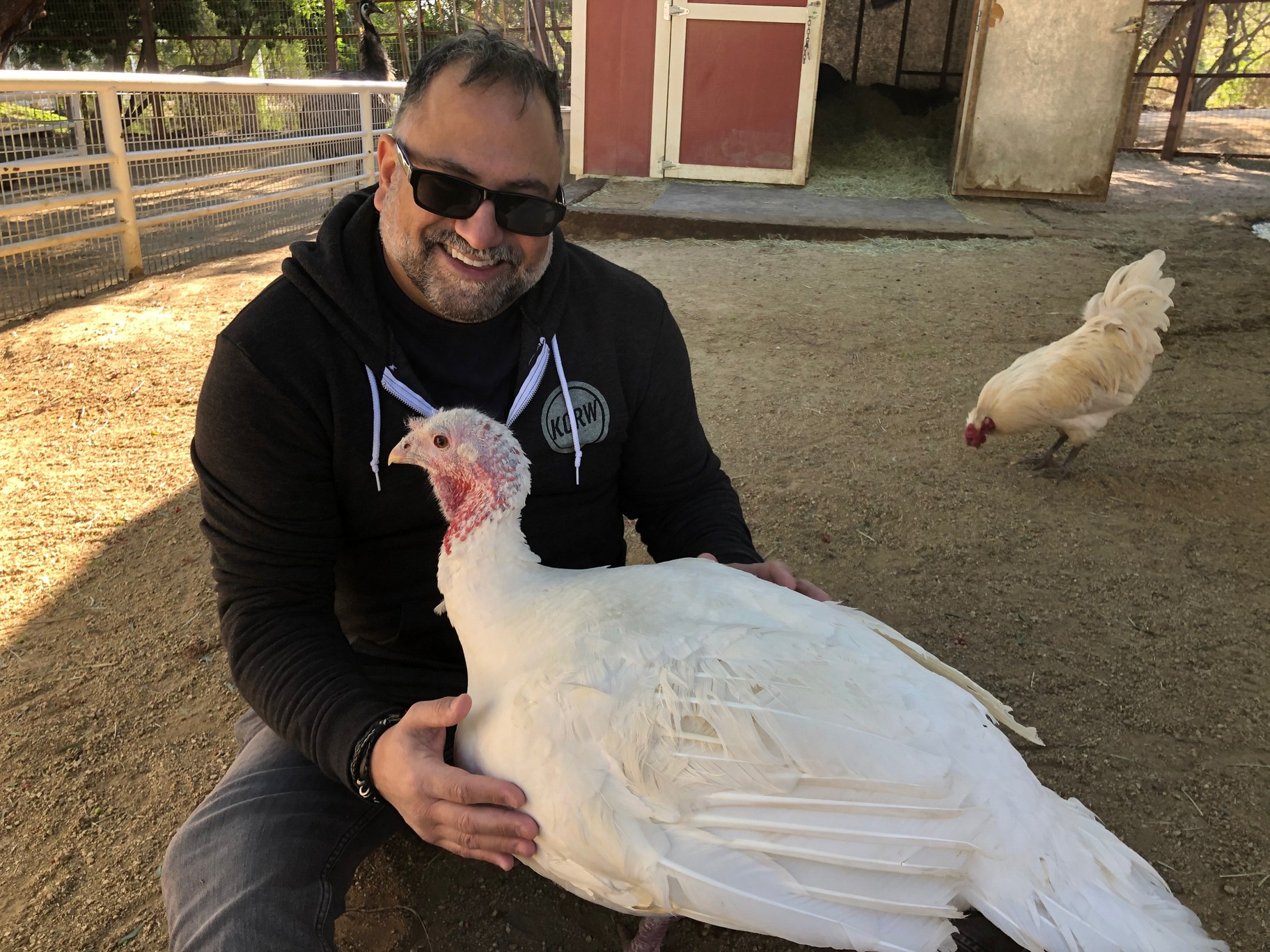 When the animals first come, they are angry and scared, says Laks.

“They're carrying a lot of trauma. And we put them through an extensive recovery program, where they learn to trust, forgive, let it go. They learn to be with us.”

Once they’ve completed that recovery process, they're ready to be “hug therapists,” which means they can be held by visitors. 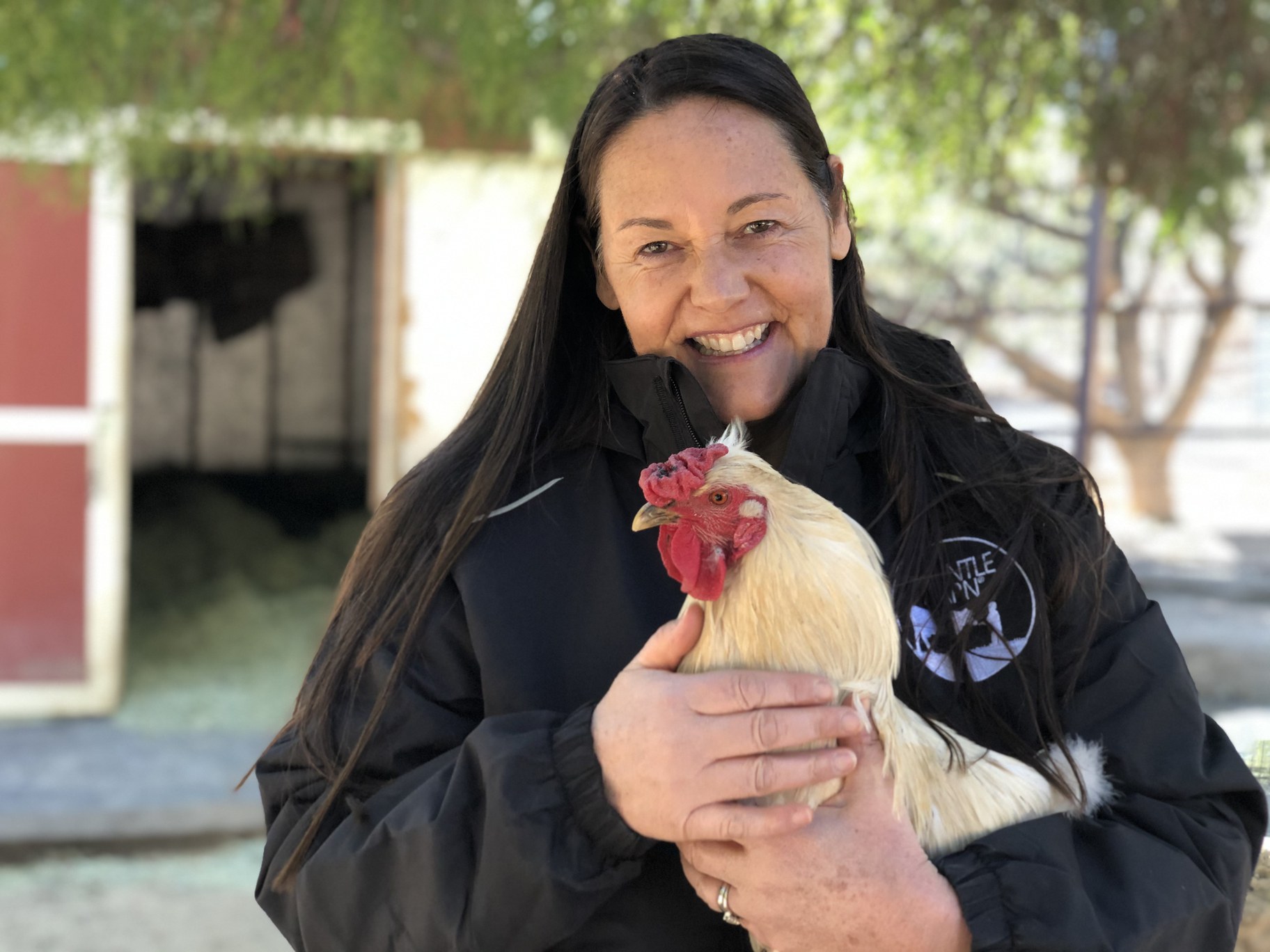 The Gentle Barn is known for cow hugging therapy, in particular.

“There's something about putting our faces on the cows, closing our eyes,” says Laks. “It's really the first time that we truly exhale and our shoulders drop, our fists unclench, we relax our faces. We exhale and we get centered and grounded and present in our bodies. And that is where real healing starts. That's why cow hug therapy helps so many people.”

The Gentle Barn is open to the public on Sundays from 10 a.m. to 2 p.m. During the week, they have private tours, school field trips, birthday parties, and of course, cow hug therapy sessions. 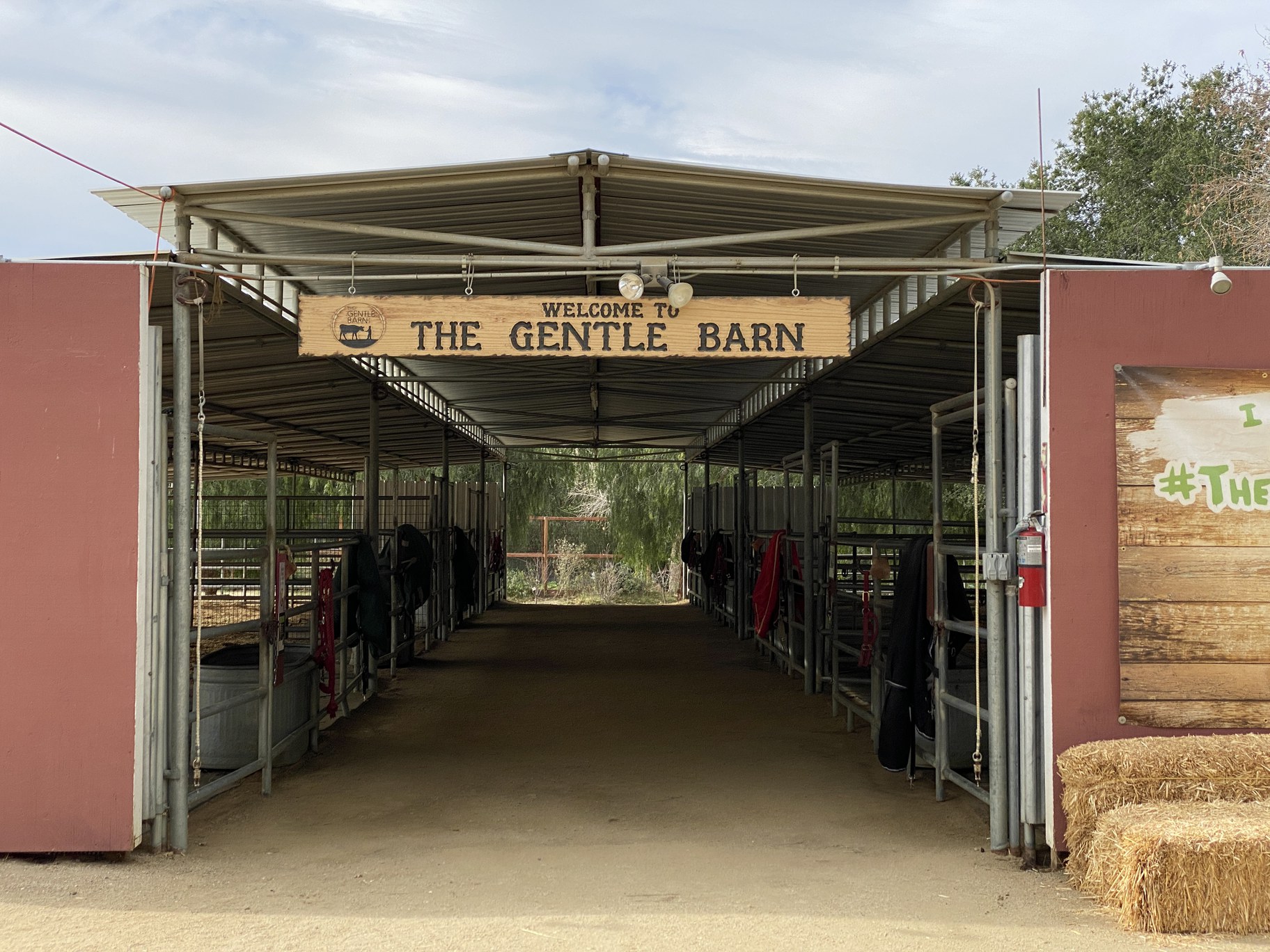 The Gentle Barn rescues animals that have nowhere else to go, and they’ve rescued thousands of them since Ellie Laks first founded it in 1999. Photo courtesy of The Gentle Barn.

People can hug cows, rub pig tummies, and maybe chat with a goat or two at the Gentle Barn near Santa Clarita.

Falconer Shawn Hayes shares his experiences on the front lines of raptor conservation in California, and the racism he’s experienced along the way.