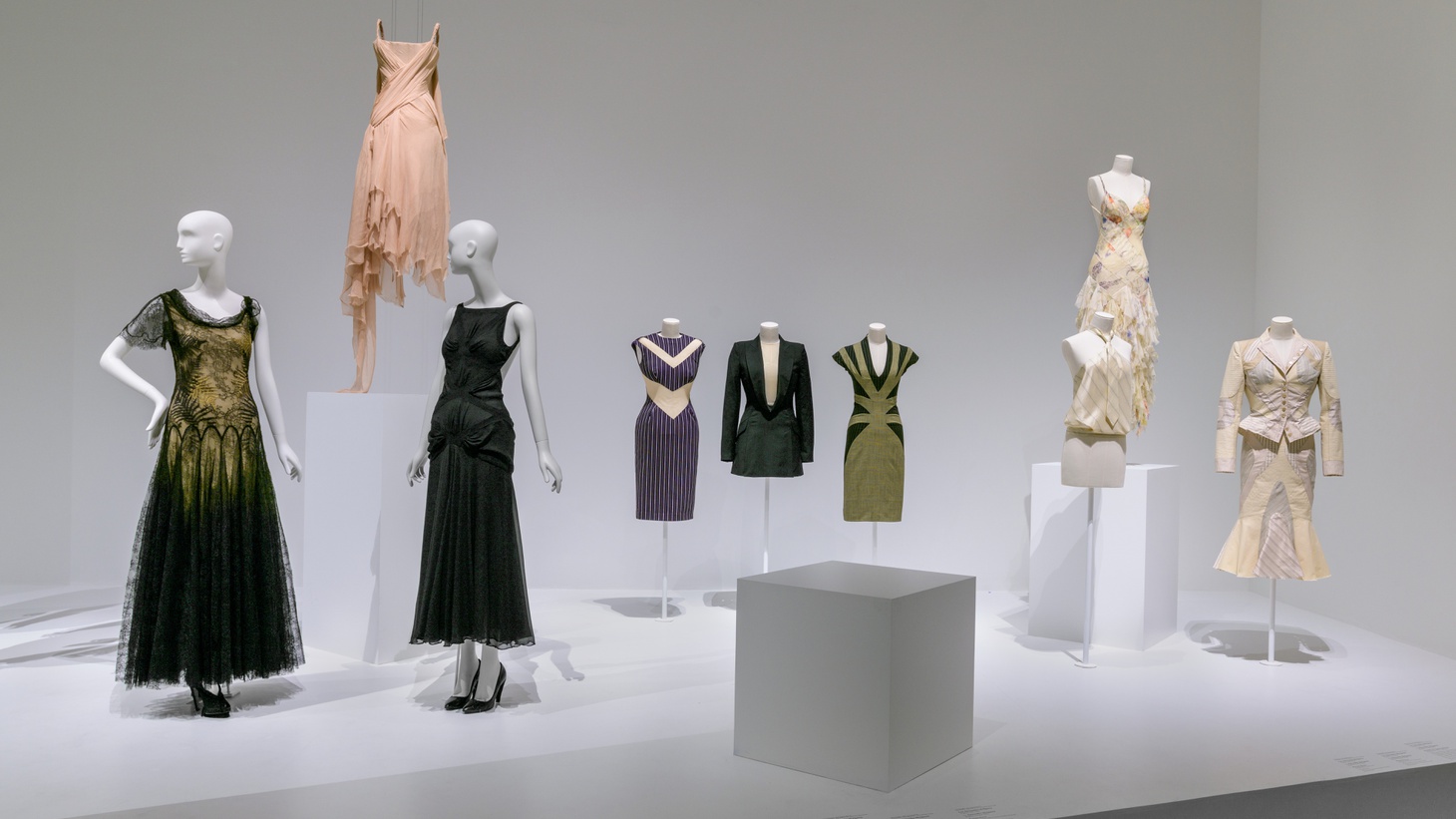 “You really get a sense of how McQueen was deeply influenced by historical narratives and visual culture,” says Lindsay Preston Zappas, founder and editor-in-chief of Contemporary Art Review Los Angeles. Photo courtesy of Museum Associates/LACMA

Two iconic artists are showcasing their work at LACMA. One show is from the late Lee Alexander McQueen, featuring designer pieces paired with objects from the museum’s collection. His exhibition, “Mind, Mythos, Muse,” runs through October 9.

A 2007 collection of his stands out — focusing on his distant relatives who he learned were executed during the Salem witch trials. That’s according to Lindsay Preston Zappas, founder and editor-in-chief of Contemporary Art Review Los Angeles.

“He made these gowns that had this beautiful … beadwork down the front, that almost looks like long locks of hair. And this was in reference to how accused women in the witch trials, their hair was often cut off. But the design could also speak to fire or women being burnt at the stake. So there's a lot of symbolism there,” she explains. “And then these gowns were paired with Ernst Barlach prints from 1922, which really played with similar themes. … You really get a sense of how deeply McQueen was influenced by historical narratives and visual culture.”

The show even comes with a soundtrack that visitors can listen to. It’s influenced by music that McQueen played for his runway shows, which encapsulated the drama of his designs, Preston Zappas says. 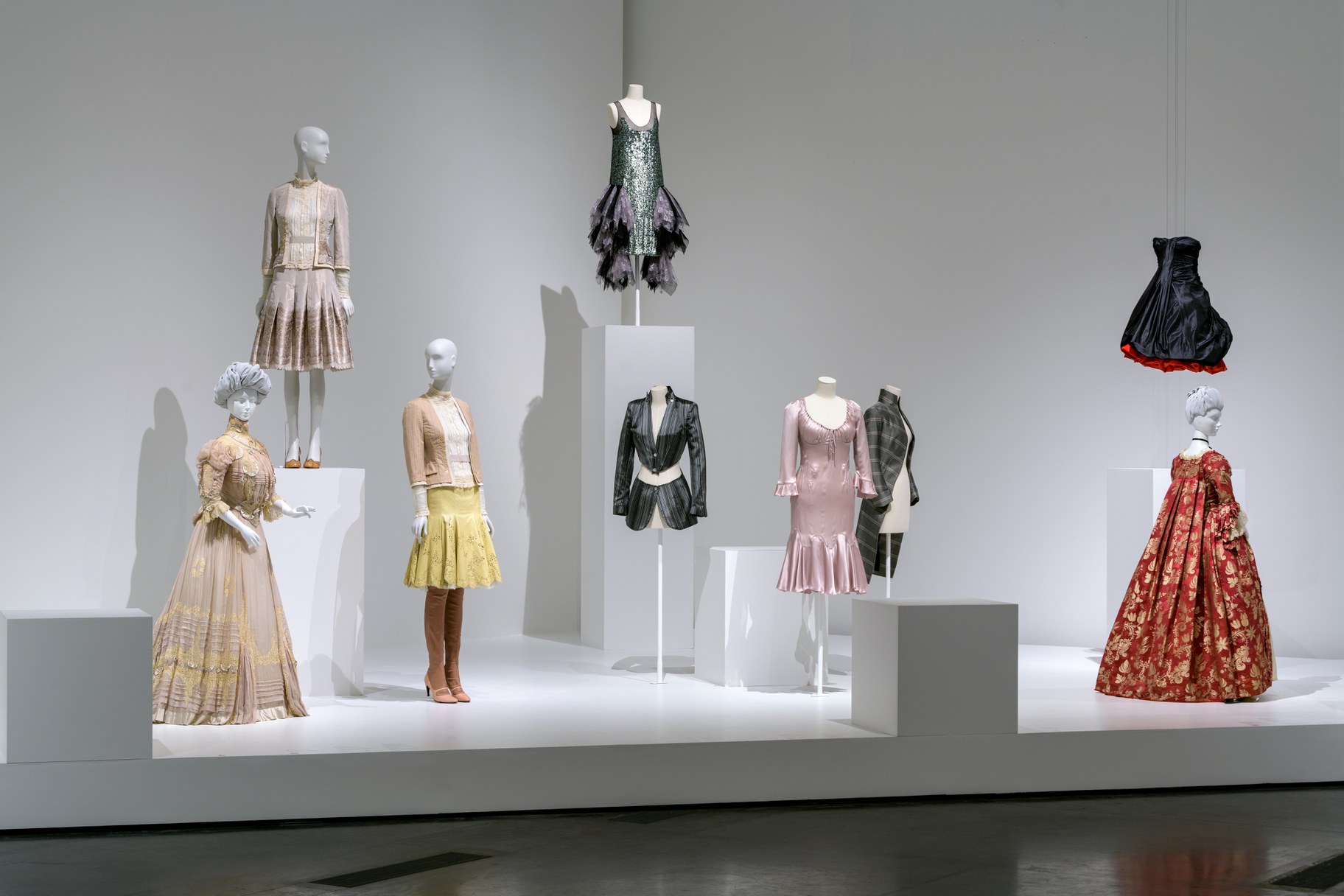 Meanwhile, visual artist Barbara Kruger’s exhibition is “Thinking of You. I Mean Me. I Mean You,” running through July 17. She’s known for typed out statements in helvetica font over a red background and grayscale image. In this show, she plays with text and pop culture in video installations and rooms wrapped in vinyl.

Kruger uses text to question systems of capitalism, consumerism, power, gender, and sexuality, and even the exhibition title is a poetic wordplay, says Preston Zappas.

“Her style is so iconic that it's really informed a whole visual style across our culture. For instance, the streetwear brand Supreme, their logo is directly ripped off of her aesthetic.” 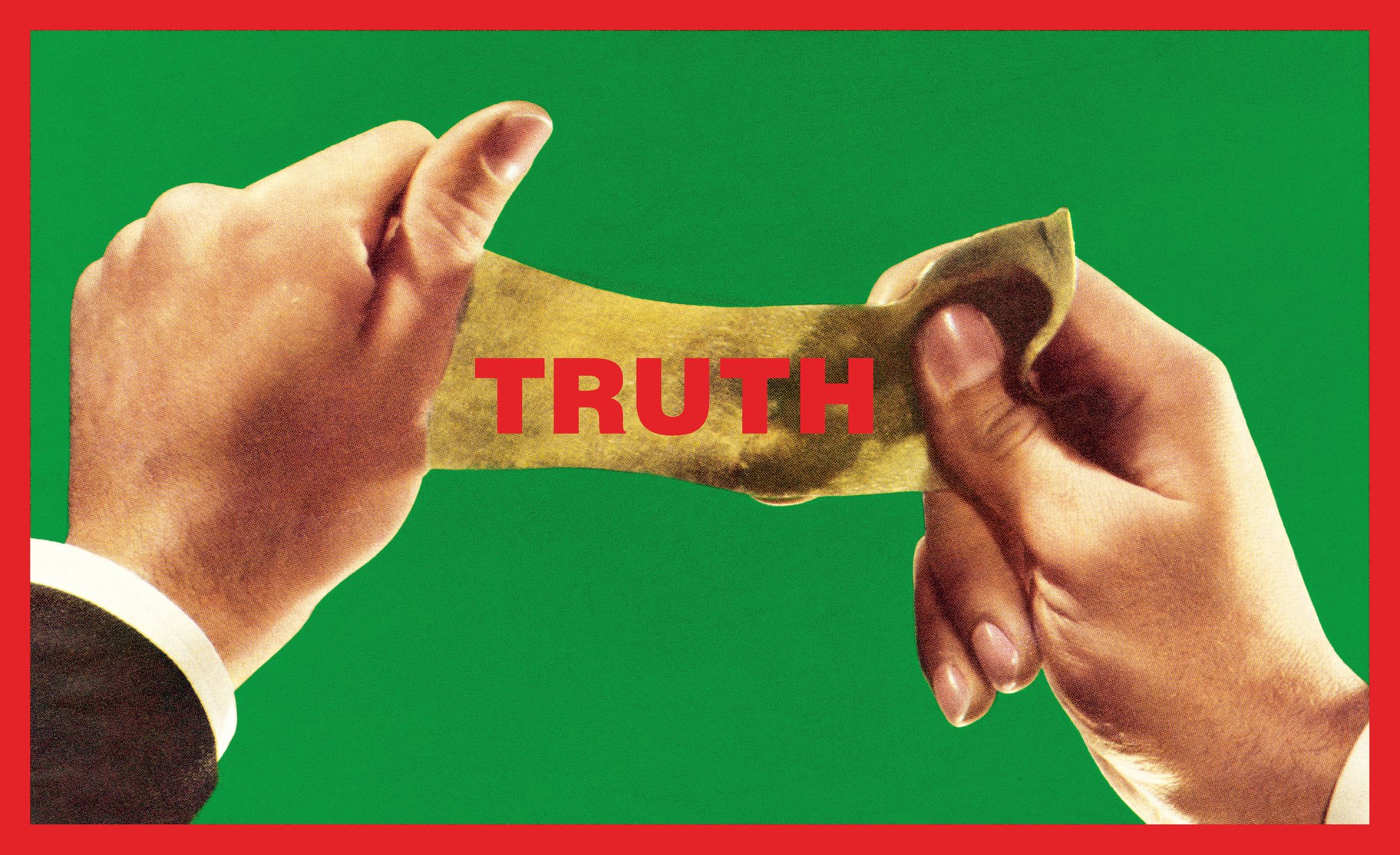 “She’s really well known for typed out statements that often appear in helvetica or futura font over a red background, over a greyscale image,” says Lindsay Preston Zappas of Barbara Kruger. Photo courtesy of Barbara Kruger. 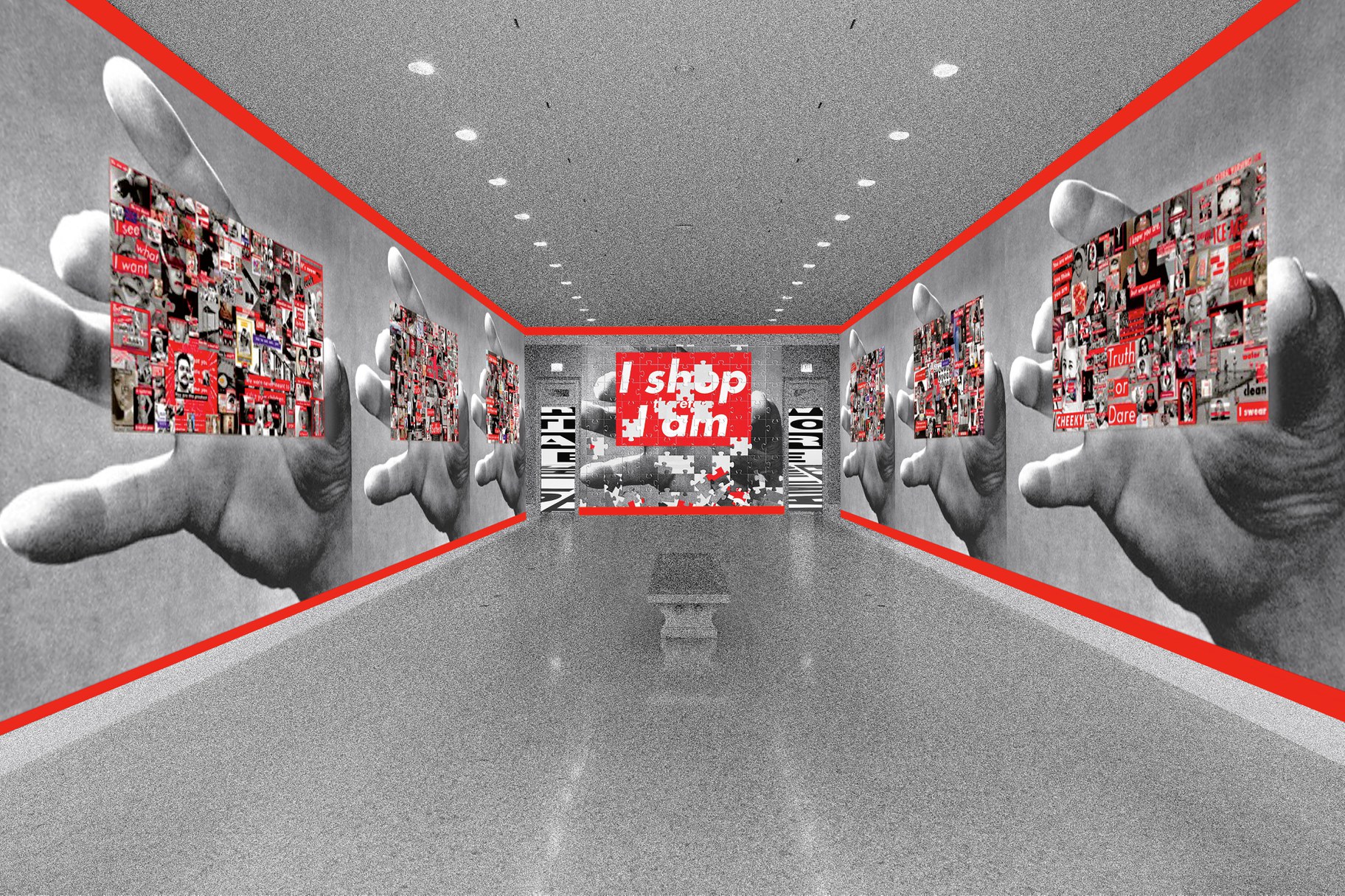 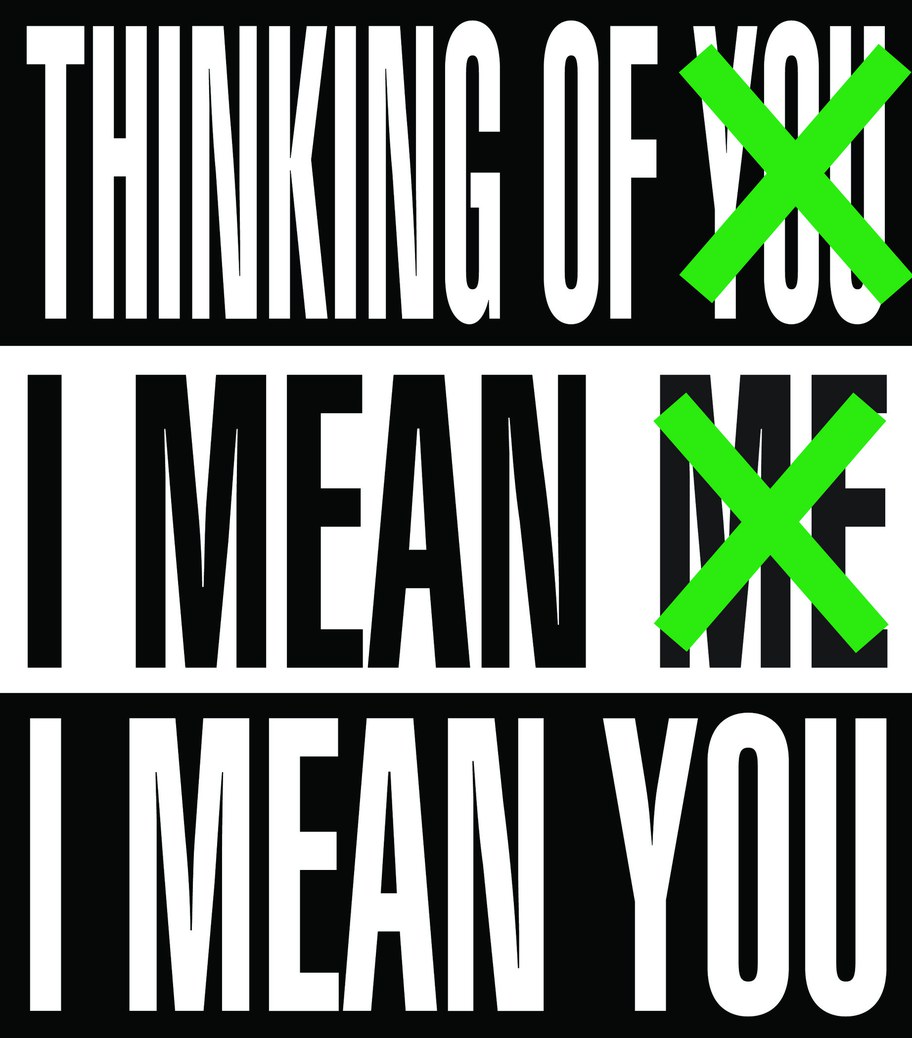 Barbara Kruger, “Thinking of You. I Mean Me. I Mean You,” 2019. Digital image courtesy of the artist.