Sid Goldstein Freedom Park in Westminster is home to a Vietnam War memorial. In December, the City Council approved another war memorial to be installed at the park, and organizers are still fundraising for it. Photo by Laura Kondourajian.

April 30 marked 46 years since the fall of Saigon and the end of the Vietnam War in 1975, which forced many people from South Vietnam to flee to the U.S. and create new communities here. One of the biggest contingents of Vietnamese families immigrated to Orange County. Because of that, Westminster is has plans for a new Vietnam War memorial. The city, however, is facing a possible financial crisis and the proposed memorial has become a point of contention.

KCRW: In December, the Westminster City Council approved the plans for the new Vietnam War memorial, which would be the second memorial in the region. Why do they want a second memorial?

Gustavo Arellano: “This is Westminster, the heart of Little Saigon … so [for] a lot of the population, this is a very painful moment to them. So they're going to want as many commemorations as possible.

In the cemetery, for instance, right there in Westminster, there's a memorial to … two people who both crossed into freedom and also died trying to get out of communist Vietnam. … People are never gonna be tired of these memorials.”

Part of the criticism is what officials are prioritizing. The city has a looming financial crisis and several temporary department heads. What’s going on here?

“What used to be suburbs in Southern California … now they're working class communities. So you have a tax base that keeps shrinking and shrinking. … City Council has to figure out how to get more taxes. They had a sales tax that's gonna expire soon, coupled with the COVID crisis of the last year … they're gonna face the financial shortfall.

Then on top of that, you've had a police department where … officers [are] suing their own city … alleging all sorts of corruption.

… The Westminster City Council is trying to do something, in their eyes, that's going to be positive for the city. But in a way, it's almost sort of masking up the problems that they have to deal with, but kind of seem to not want to.”

City Councilman Tai Do said the memorial comes from the mayor and his own agenda, not from veterans themselves or a veterans group. Do you think Mayor Tri Ta’s decision is political? Why is he interested in funding and building a new memorial?

“Anything involving Vietnamese anything in Westminster in politics is always going to be political. Just like any other ethnic community in American history, there's factions upon factions upon faction. So the Mayor Tri Ta, yes, he's in charge of the city, but he has people who do not like him at all.

And it seems completely obvious, by the way, that yes, his intentions might be noble. And yes, he's doing something for the Vietnamese community, which has made Westminster into something more than just a suburban nothing that it was before. But still, he wants that photo op. He wants all of that, just like any other politician would.” 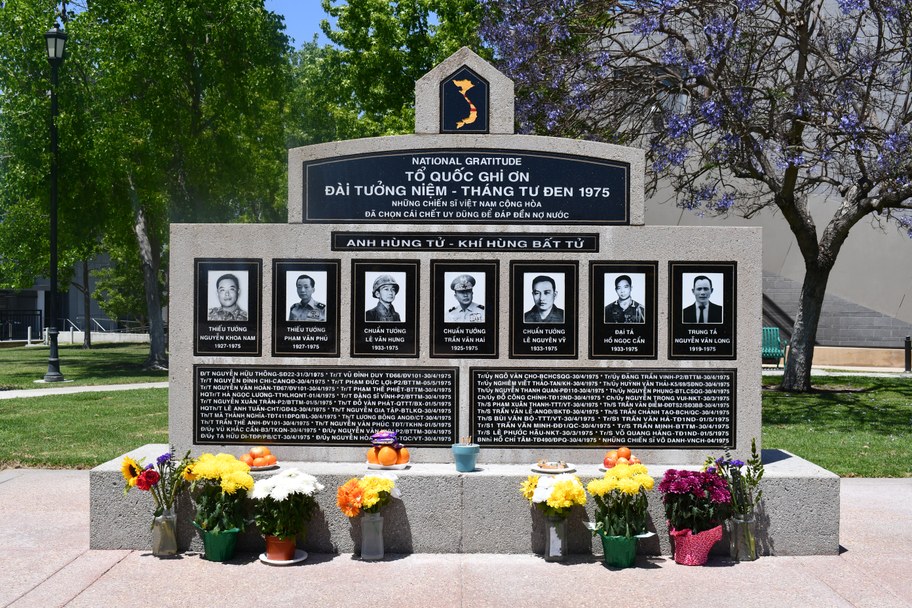 In Sid Goldstein Freedom Park in Westminster, a memorial honors lives lost during the Vietnam War. Photo by Laura Kondourajian.

Mayor Ta says this memorial would come at no cost to taxpayers. How does he plan to get it funded?

“Apparently this memorial … would commemorate one specific battle: basically the Vietnamese version of Cinco de Mayo, except not with all the cheap beers and sombreros. … It would be all privately donated. The cost is going to be $125,000, at least that’s the estimated cost. So already there's an online campaign. Mayor Ta, on his own time, he's gone up to other Little Saigons, like San Jose, to try to raise funds for this. So again, this is supposed to be something in the minds, not just of the people who are advocating for it, not just to commemorate something, but also frankly, for Westminster to get more tourists, more people to come there to pay their respects.”

Why the hullabaloo over something the mayor says is not costing taxpayers?

“Because this is Vietnamese American politicians fighting against each other. They all want the glory. Then on top of that, you have Vietnam veterans from here who fought for the American side saying, ‘Hey, we're not being included on this. We already have one.’ And the current one has a statue of a Vietnamese soldier and American soldier.

This one would commemorate a specific battle not even involving Americans, by the way, but the South Vietnamese army beating the North Vietnamese army at a time when the United States in 1972 was starting to get out of Vietnam. So this is something that the Vietnamese people celebrate mostly on their own.

Meanwhile, Vietnam vets don't really see it as something that's gonna appeal to them or that speaks to the valor that they had when they were fighting overseas.”

The City Council unanimously approved the memorial in December. Is it going to get built at this point?

“This is Westminster, there's a lot of factions who are always fighting each other. It’ll eventually get built, as long as it doesn't cost any taxpayer money, and as long as the city helps along with it. But again, Tri Ta, he's gonna be up for reelection soon. So it better be built before he's out of office because you might have a new guy saying, ‘No, we don't want this.’”