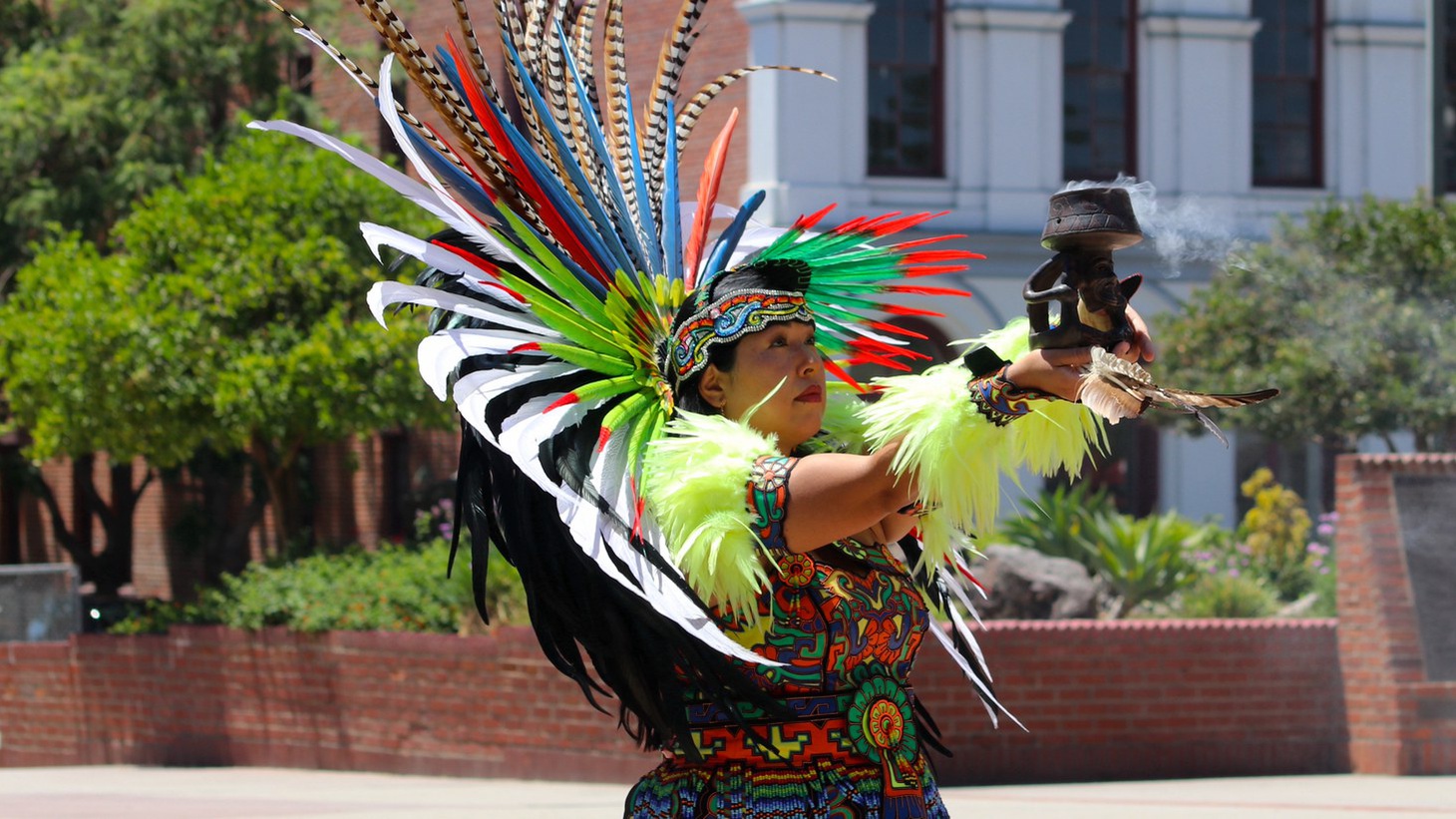 Lupe Tellez clears the dance space before the family begins to dance. Photo by Giuliana Mayo.

The Tellez family is a group of traditional Aztec dancers based in LA, and they perform in the plaza at Olvera Street every Sunday afternoon. An hour before each show, in a busy parking lot, they help each other put on their regalia, painstakingly inserting each feather into their headdresses, strapping on arm bands and belts, and lacing up their sandals. A whole to-do takes place as folks in their Sunday best walk to La Placita for services, and tourists stream into Olvera Street for lunch. 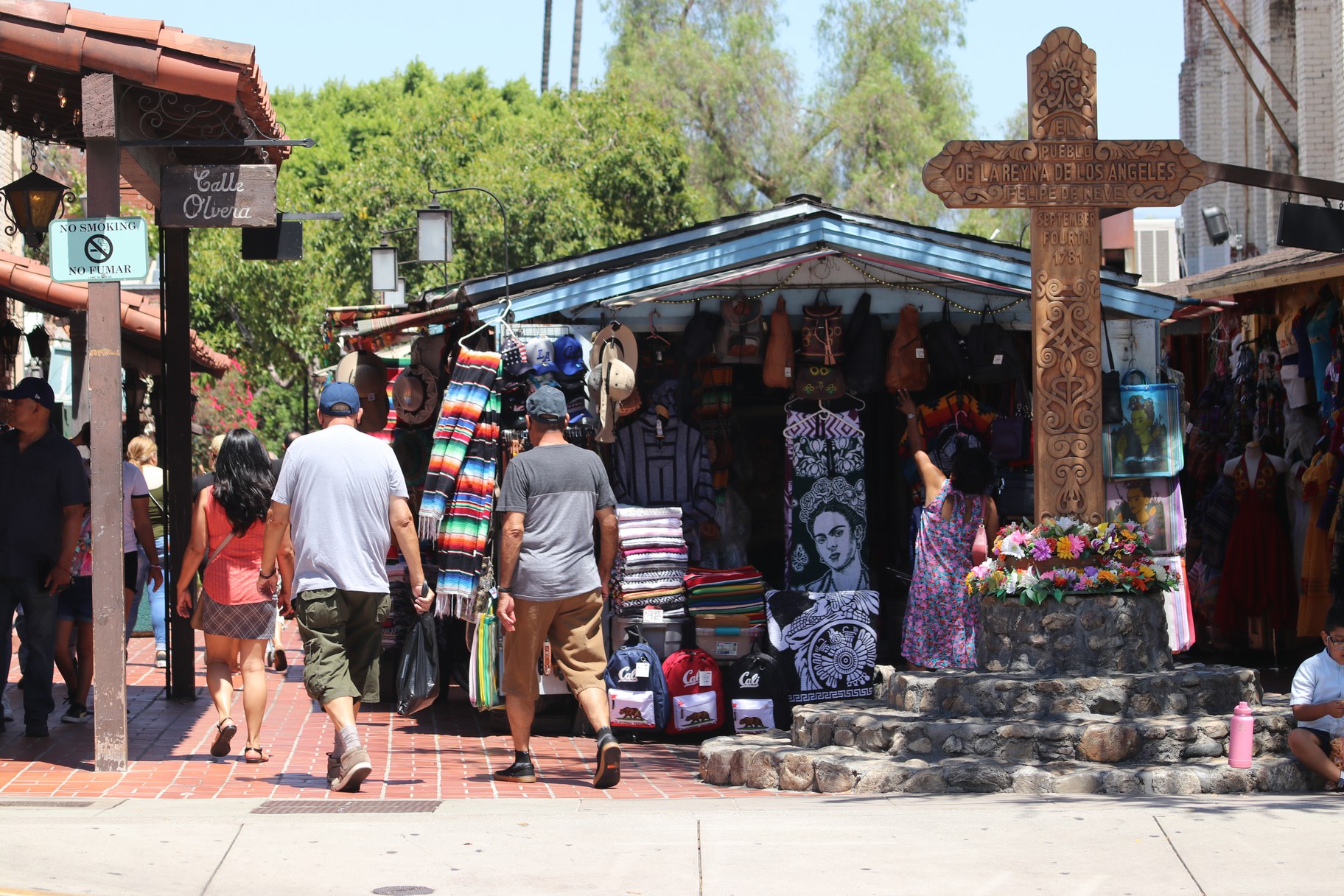 Lupe and Martin met in the 1990s in the Aztec dance scene and began their group, In Tlanextli Tlacopan as their family grew. They’ve been performing in the plaza for over 20 years.

“I think a lot of people think that this is … a pastime or a hobby,” Lupe explains. “But for many of us, it's like water, it's like air, it's something that you have to do. It's an expression of who you are. And if we can't dance, it's like a little piece of you dies inside.”

Martin grew up in the Tlacopan neighborhood of Mexico City, where he learned Aztec dance traditions from elders, eventually bringing them north to California. Now he dispenses his knowledge to his family and the audiences who come to see them. “For me, it’s a representation of my heart. I share my heart with them, and they learn with me at the same time.”

Ocelotl Cuauhtli started dancing with his family in the womb. He is now in college, but still returns to the plaza every weekend with his family. He says of the people who watch their performances: “They connect to us on a different level with the sounds and with our movements. I think it's just a universal language that we speak.” 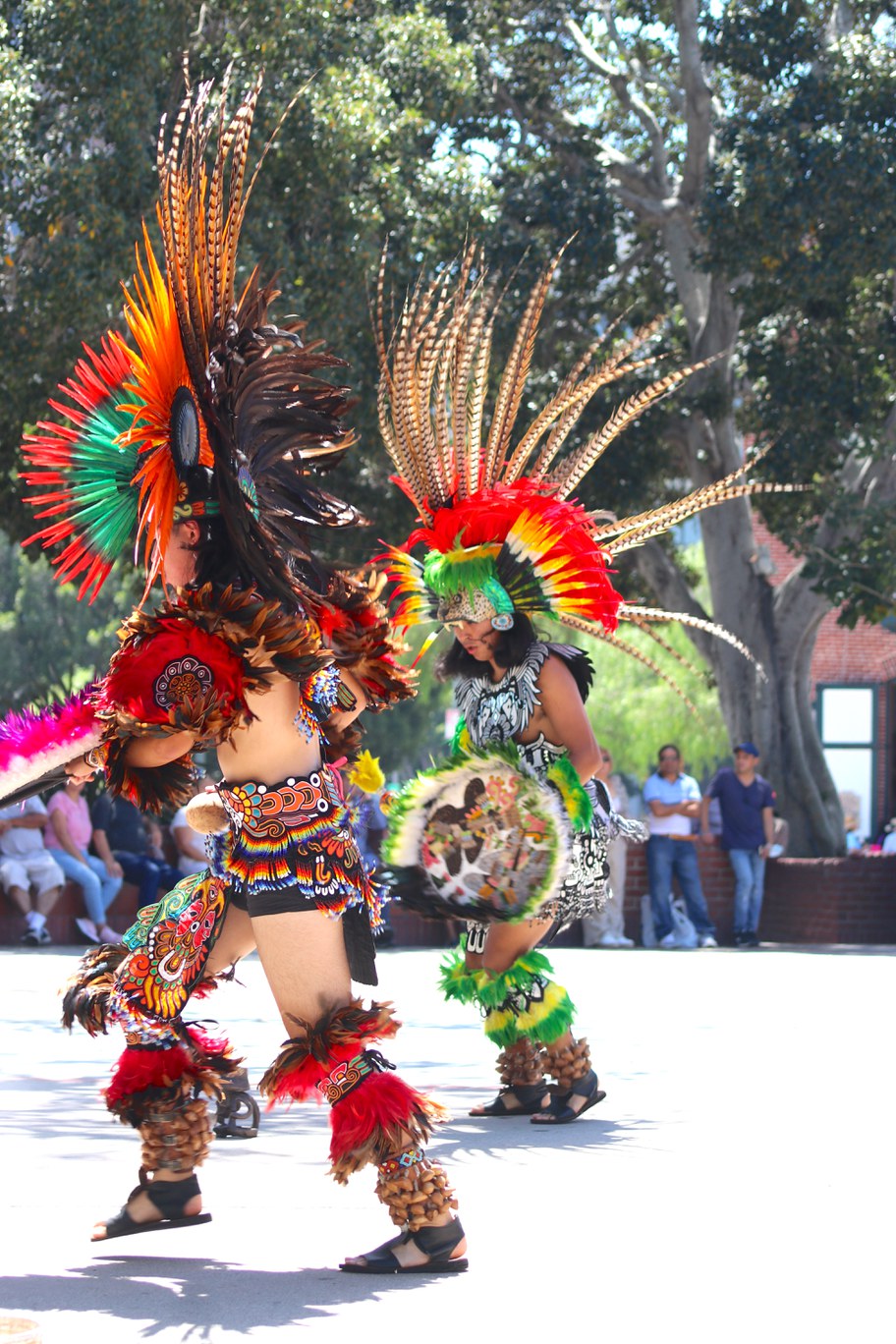 Lupe wants the onlookers to enjoy themselves, but also recognize that her culture still exists too. 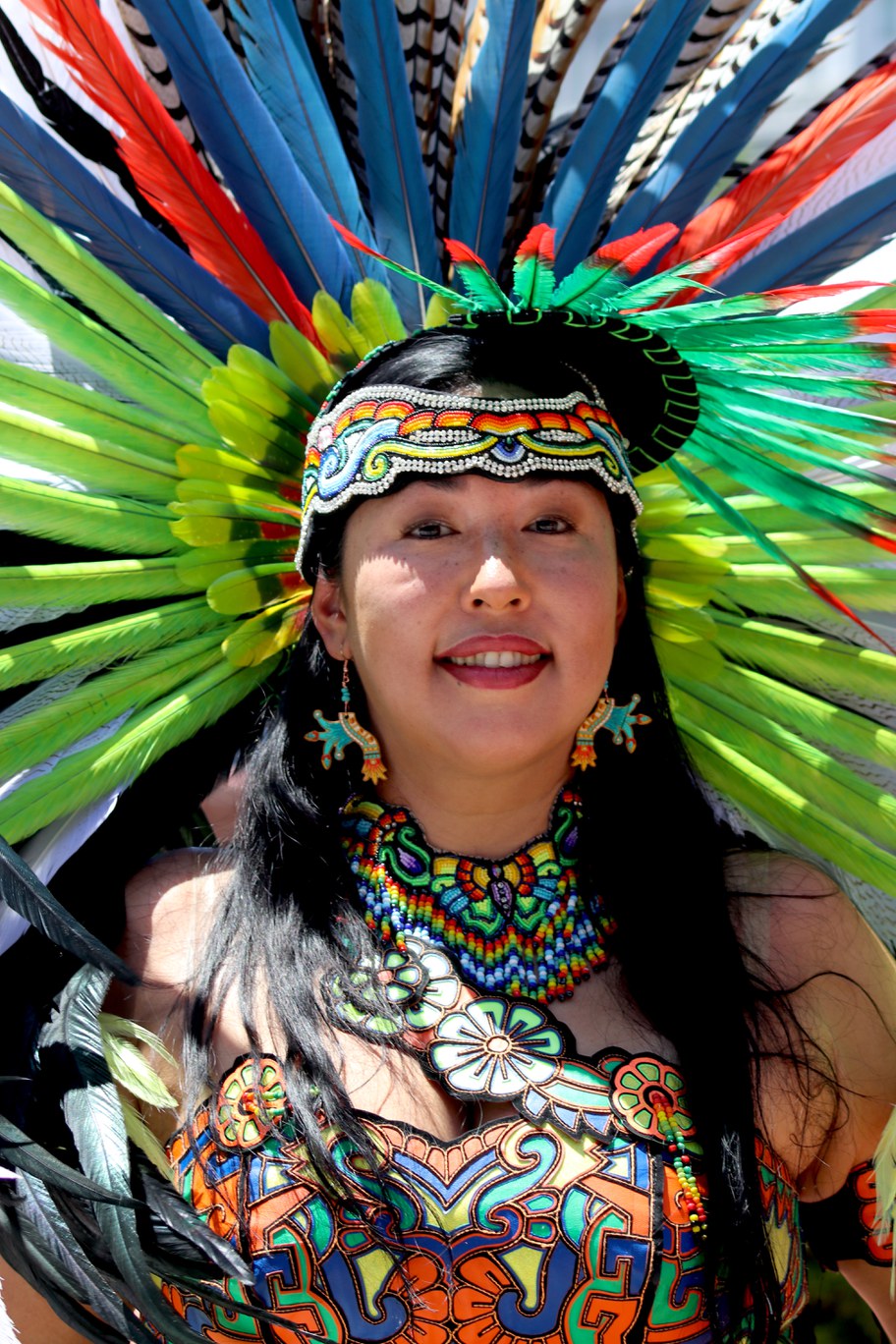 “I think a lot of people think that this is … a pastime or a hobby. But for many of us, it's like water, it's like air, it's something that you have to do. It's an expression of who you are. And if we can't dance, it's like a little piece of you dies inside,” says Lupe Tellez. Photo by Giuliana Mayo. 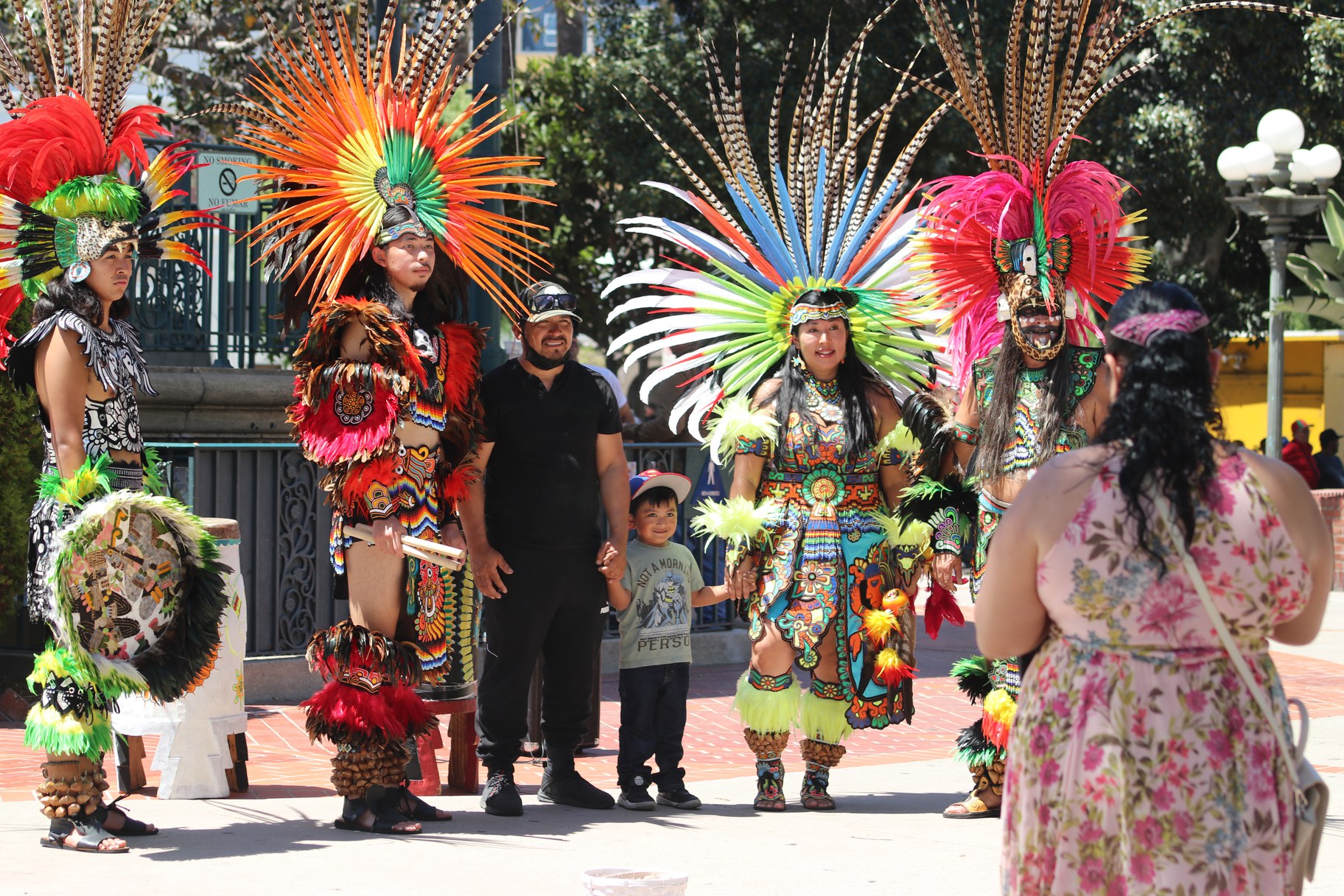 The Tellez family is happy to take a photo with anyone who wants one. Photo by Giuliana Mayo.