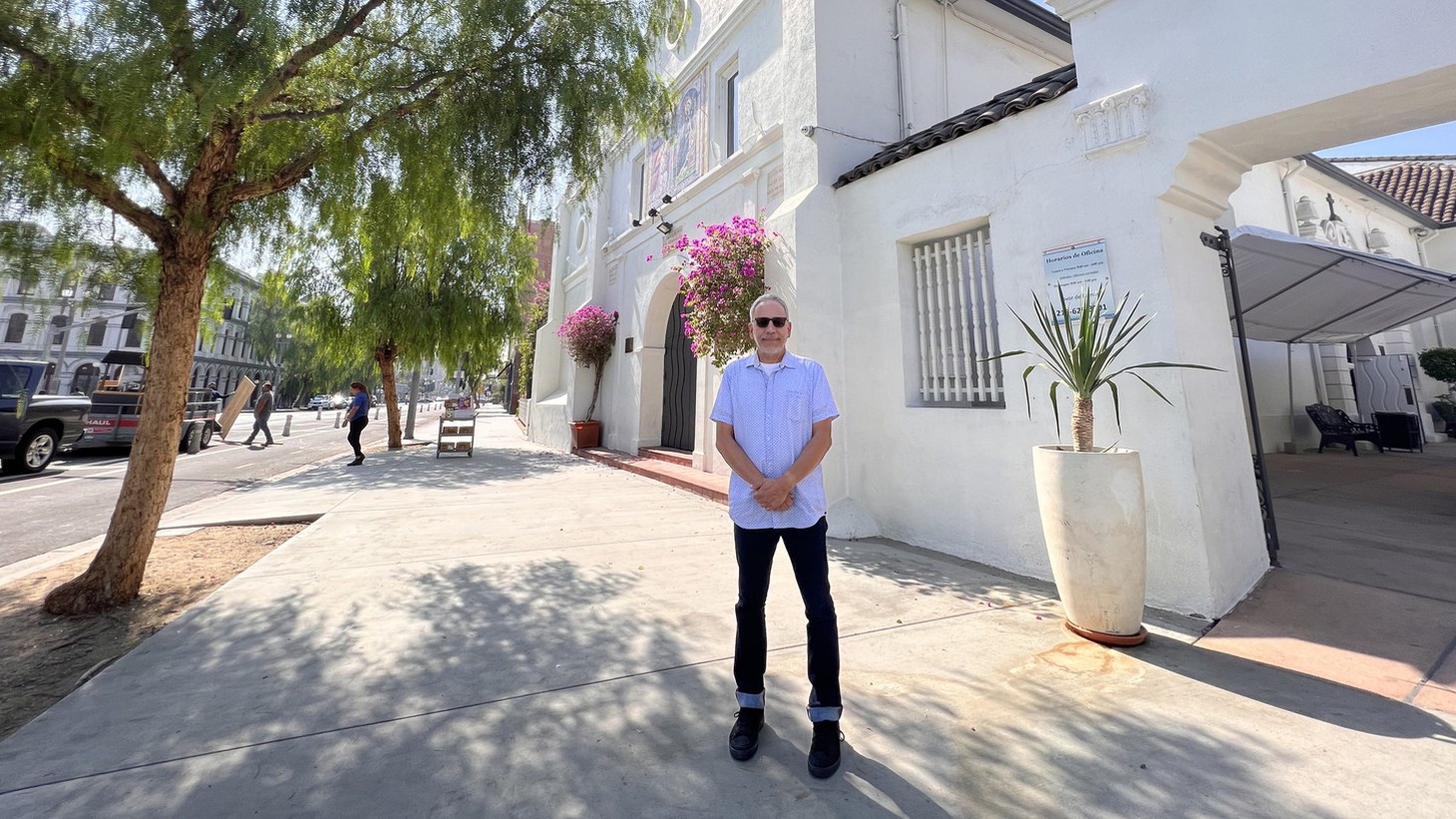 Rúben Martinez stands in front of La Placita in El Pueblo. “Many of those sitting in the pews are the recently arrived, who are holding on to their faith to get them through the next day, the next week, during these tremendously troubled times,” he says of the church. Photo by Steve Chiotakis.

La Placita is the Catholic church located off Main Street in El Pueblo, a neighborhood where many immigrants from Mexico and Central America stop first when they come to LA. Built in 1814, La Placita is known as a sanctuary for these immigrants, especially during the 1980s for those fleeing violence in El Salvador and Guatemala.

“The church would have been functioning, basically, as a refugee welcome center 24/7. People [were] arriving by any means necessary, getting across the border, fleeing the civil wars, the chaos of the civil wars in El Salvador and Guatemala at that time,” explains Rúben Martinez, professor of English at Loyola Marymount University.

After the migrants left their home countries, they also dealt with dangerous conditions in Mexico and with the U.S. Border Patrol, Martinez says. “There were people that were beyond desperation, into exhaustion, into just bleary-eyed states, having seen and experienced and endured way too much.”

Father Luis Olivares threw the church’s doors open and didn’t ask migrants for their documents — in defiance of federal law.

“Little did his superiors at the Claretians order, or [then]-Archbishop Roger Mahony at the time, know that he was going to take a radical turn in his ministry, because he was known as a company guy, who liked wearing fancy Italian patent leather loafers.”

He continues, “A chance encounter with Cesar Chavez in the 1970s put him on a path towards a much more radical ministry. And when he saw the need from the refugees, he found his calling. And over the next decade, this church became the heart of the sanctuary movement in Southern California.”

La Placita’s courtyard has also been a sanctuary for other groups in need, including street vendors and day laborers.

“The sanctuary kept on taking in more and more people persecuted by different means and seeking shelter. Several movements found safe space here for organizing meetings. … These rooms were filled with activists of that era,” Martinez explains.

Today, La Placita is the historic center of LA. But it is also a flashpoint for gentrification and other social issues impacting the city. Martinez says one of the biggest recent housing developments was built in the area, while more people are experiencing homelessness.

Everything's changed [and] nothing has changed. Put gentrification on top of the pile of the histories that have coincided here over the years. But the needy seeking sanctuary are still here too, and La Placita still functions that way,” Martinez says. “Maybe not exactly [in] the same way … but those pews on Sunday fill up. And many of those sitting in the pews are the recently arrived, who are holding on to their faith to get them through the next day, the next week, during these tremendously troubled times.”