Douglas Bue, 65, speaks to a deputy with the LA County Sheriff’s Department at the Veterans Row homeless encampment. Bue turned down an offer to go to the Dream Center but still hopes to move inside soon. Photo by Zaydee Sanchez for KCRW.

An unhoused veteran is in custody after sheriff’s deputies arrested him for the stabbing death of a fellow resident of a Brentwood encampment last week. It was the second killing in less than six months at the camp, where dozens of veterans live on the sidewalk outside the gates of the Veterans Affairs campus in West LA. The violence drew attention from politicians, and raises questions some local residents and advocates have been asking for months: When and where will the veterans find long-term housing?

The encampment, nicknamed Veterans Row by its residents, stands on San Vicente Boulevard in Brentwood. It’s a coordinated line of large, identical tents with American flags pinned to the fronts. The matching tents and flags are meant to protest land use on the West LA VA campus — specifically the VA’s failure to meet veteran housing commitments while leasing parts of the property to non-veteran entities. 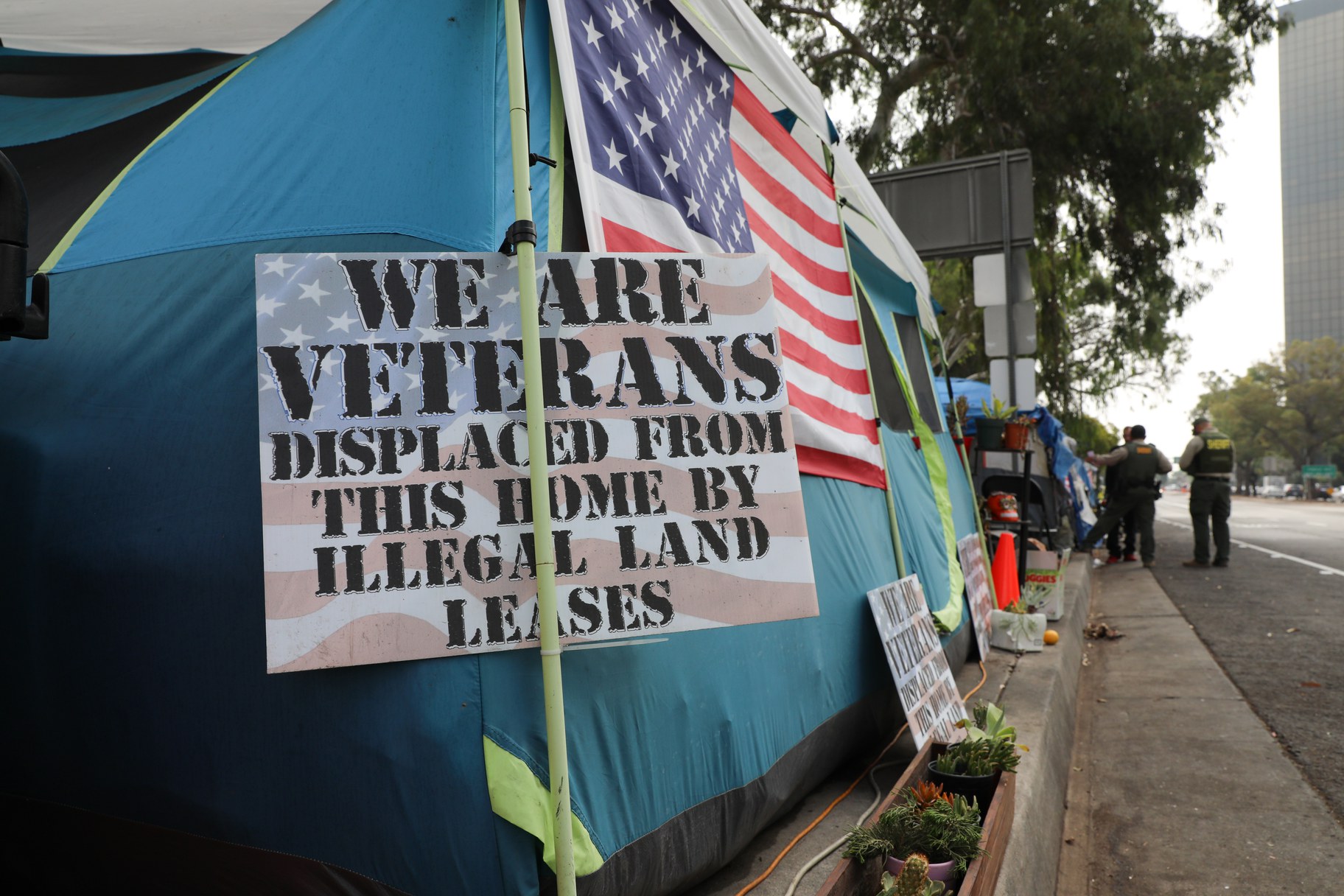 A protest sign is seen at the Veterans Row homeless encampment outside the VA campus in West LA. Photo by Zaydee Sanchez for KCRW.

While it’s not new for homeless veterans to bed down on the streets around the VA, Veterans Row grew during the pandemic, after LA County suspended cleanups that would have forced people to take down tents and move, in line with Centers for Disease Control guidance. About 40 unhoused U.S. military veterans now live at the encampment, according to first hand interviews and VA officials, and most receive or have received services at the West VA campus, including the victim and suspect in last week’s stabbing.

The victim, 68-year-old former Marine and Vietnam veteran Andre Butler, heard some kind of dispute going on in another tent early last Wednesday between another veteran and his girlfriend, according to LA County Sheriff’s Sergeant Mark Marbach. Butler was trying to intervene when 36-year-old Darby Sandoval, an Army veteran who’d shown symptoms of mental illness in the months leading up to the attack, allegedly stabbed him in the neck. The day before the killing, Sandoval was speaking in an agitated way inside his tent as LA County Sheriff’s deputies specializing in homeless outreach visited Veterans Row. After an interaction, the deputies decided not to escalate the situation.

“I kind of beat myself up about it last night,” said Lieutenant William Kitchin of the Sheriff’s Homeless Outreach Services Team, or HOST, the day after the killing. Still, he said, Sandoval wasn't threatening to hurt himself or anyone else, and was asleep by the time the deputies left. “It’s an unfortunate incident that I don’t think could’ve been prevented or foreseen.”

Just hours after the stabbing, LA City Attorney and mayoral candidate Mike Feuer held a press conference at the encampment and called on the county to take action.

Echoing the frustrations of many Brentwood residents, he pointed out that unlike most other encampments, this one sits just yards away from various services and shelter options. That includes a safe camping site, a group shelter, and treatment programs for PTSD and addiction. Most of the people living at Veterans Row qualify for these programs, and over the past year, several people from the encampment have entered them. Others have cycled back and forth, or exited programs only to settle in at Veterans Row, which Feuer said should be removed as an option.

“It is time for this encampment to end, for its residents to be housed, for the sidewalk to be cleared,” he said.

But in fact, there had been action. The week before the stabbing, the LA County Sheriff’s Department had started an effort to clear the encampment. Deputies specializing in homeless outreach interacted with the suspect one day before the killing. Outreach workers with various government agencies and nonprofits had been visiting the location for months. Officials with the West LA VA held town hall meetings with unhoused veterans over the summer. In July, the chief of staff to U.S. Secretary of Veterans Affairs Denis McDonough even toured the encampment. Yet for all that activity, there seems to be little coordination or urgency among policymakers in moving unhoused veterans off the street.

Advocates say one problem is that the programs and services at the VA are unnecessarily difficult to navigate, in particular for those who need the most help.

“There's some very basic, simple things we could do to reduce this encampment in half if people would just put things together,” said Rob Reynolds, a U.S. Army and Iraq war veteran who’s a member of the veterans service organization AMVETS and volunteers most of his time as an organizer and advocate for Veterans Row. 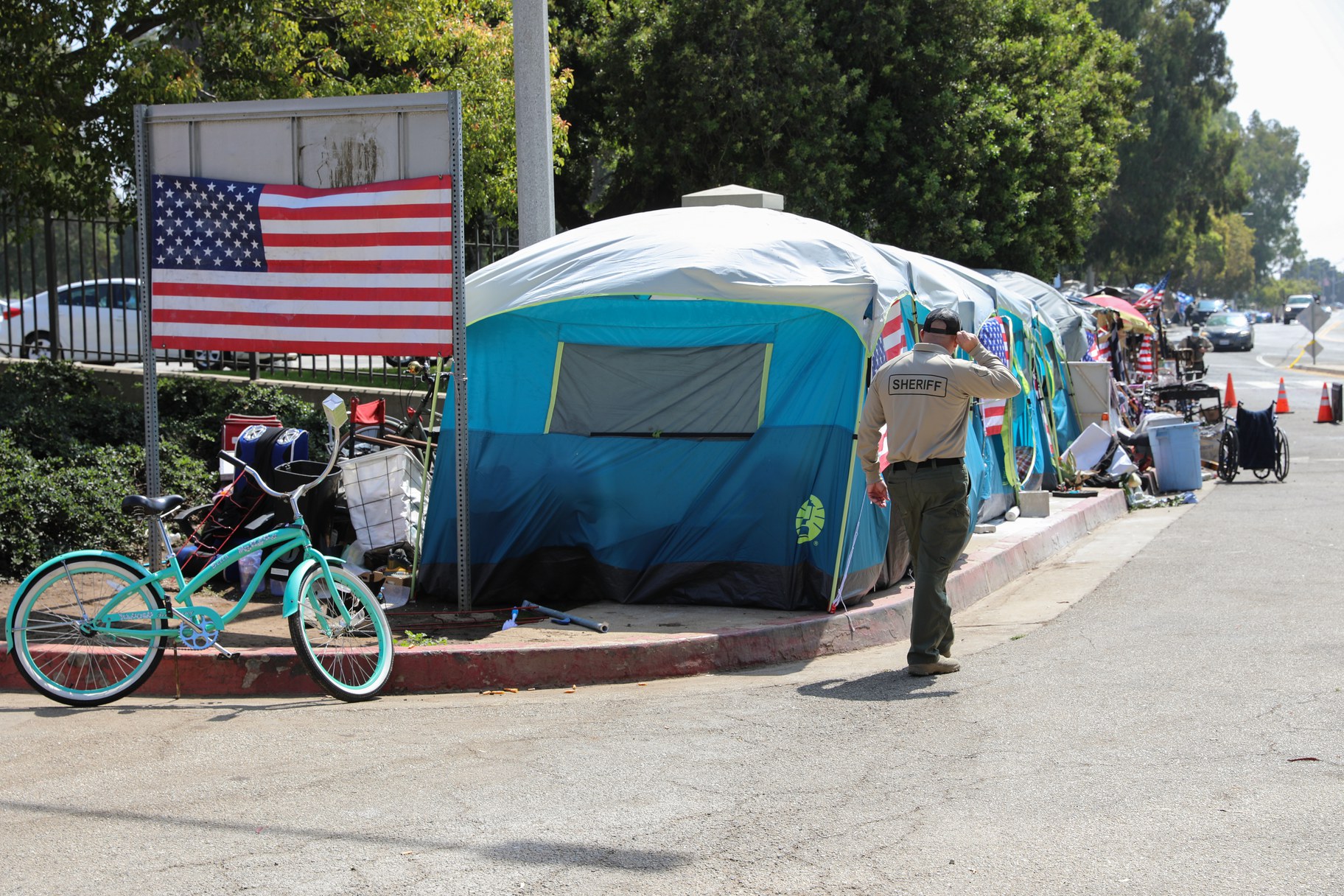 The outburst of violence followed by political attention is a familiar pattern. Months earlier, after an eerily identical murder at the same encampment, LA County and federal officials intensified outreach efforts at Veterans Row to move people into programs and housing. It’s a hard job to be sure.

“They’re a difficult crowd,” said Matthew McGahran, who’s in charge of homelessness programs at the West LA VA, and many people at the encampment suffer from mental health and substance abuse issues.

At the same time, plans to move people indoors fell through more than once.

For example, weeks ago outreach workers from the Los Angeles Homeless Services Authority identified three veterans at the encampment with rental vouchers who qualified and were willing to be put up in hotel rooms while searching for apartments. But the rooms have not become available yet.

Early in the summer, a group of roughly 10 unhoused veterans from Veterans Row expected to move together into a new permanent supportive housing complex called Step Up on Western, according to the veterans and the VA. But a big move-in never happened. Instead, veterans slowly got word one by one that their apartments were ready. Four people who previously lived on Veterans Row have moved to Step Up on Western. Others are still waiting. In total, nine people have moved into the 32-unit building since June, when the city Housing Authority approved the first round of applicants.

After the plan to move with a group fell apart, one veteran living on Veterans Row got cold feet about moving in at all. “I’m used to these guys,” Richard Reeves said in July. “Moving in one at a time really freaked me out. My PTSD is really bad. I haven’t lost the apartment, it’s just I can’t do it by myself.” As of last week, he was still on Veterans Row.

Another veteran, Dean Lee, overdosed on fentanyl and nearly died while waiting weeks at Veterans Row to move into Step Up on Western. He finally moved last month. “It’s a roof over my head that's out of the elements I'm finding structure again,” he said. “There’s no fun moments being homeless. I’m glad I’m done with it.” 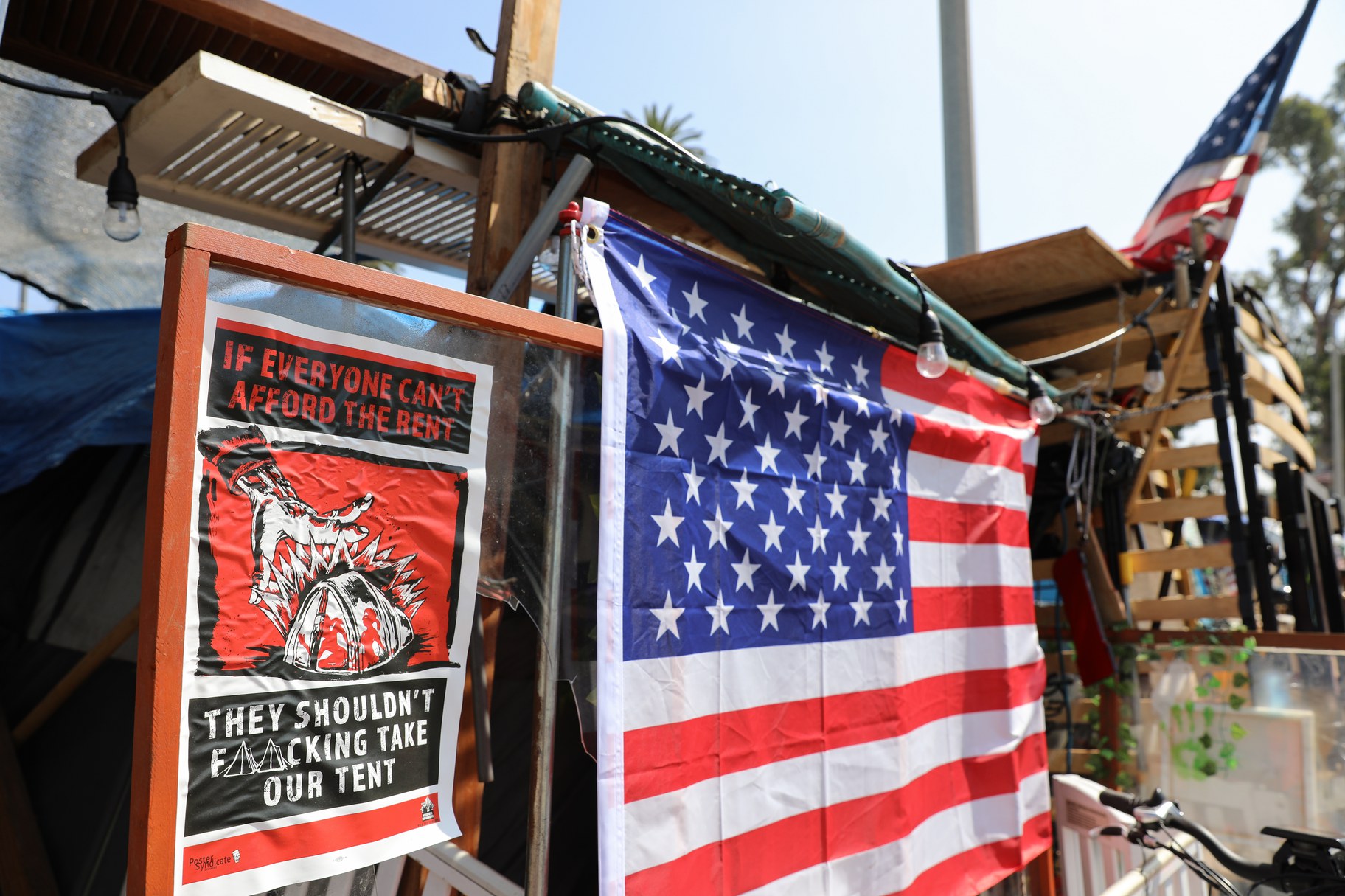 A poster hanging outside a homeless camp at Veterans Row says, “If everyone can’t afford the rent, they shouldn’t f**king take our tent.” Photo by Zaydee Sanchez for KCRW.

In June, VA Secretary McDonough vowed to revitalize a languishing plan to build thousands of apartments for homeless veterans on the VA campus and turn the West LA VA into a national model for ending veteran homelessness. In the meantime, federal officials are letting the county government and local law enforcement lead the way on the encampment right outside their doorstep.

Earlier this month the LA County Sheriff’s Department’s HOST started doing outreach at the encampment, after being asked to step in by the Brentwood Community Council. The goal is to connect people with services and ultimately clear Veterans Row.

“The fact that we had to rely upon law enforcement and the sheriff to come forward and propose such a program versus the county, which has tremendous resources at this point to address homelessness, is very disappointing,” said Michelle Bisnoff, chair of the Brentwood Community Council.

So far, deputies have been talking to the unhoused veterans and offering rides to the Dream Center in Echo Park, which has a transitional living program for veterans. One person took them up on it, but returned to the encampment the same day.

Another, Doug Bue, 65, wanted to go when he first heard about it. He came to Veterans Row this month after being kicked out of the A Bridge Home Shelter on the VA campus. After speaking with sheriff’s deputies about the Dream Center, he changed his mind. He thought the program sounded too restrictive and similar to a rehab, and he says he’s not an addict. He still hopes to go inside somewhere soon and hopes a different offer will materialize. 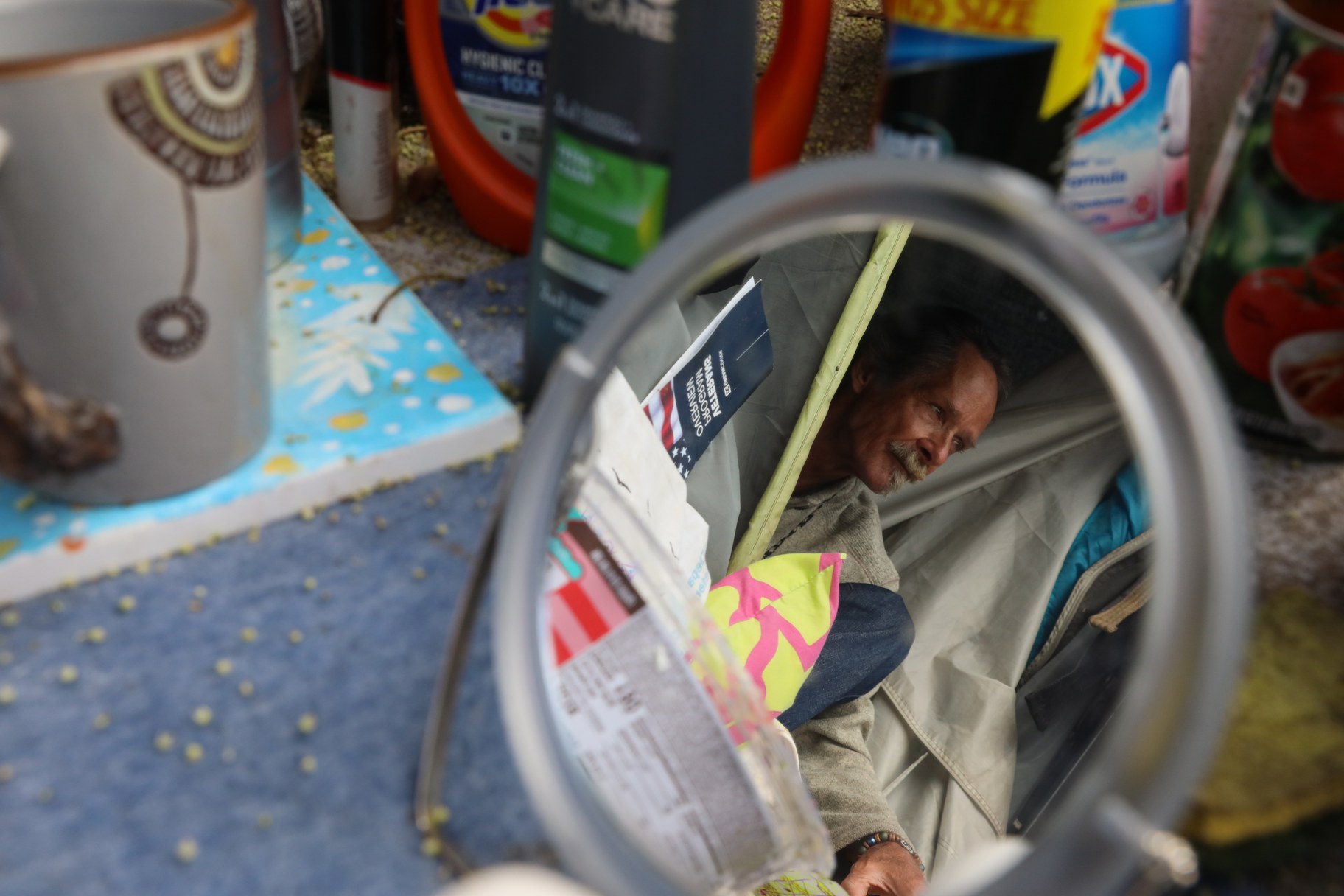 A mirror shows a reflection of Doug Bue as he sits inside his encampment at Veterans Row. Photo by Zaydee Sanchez for KCRW. 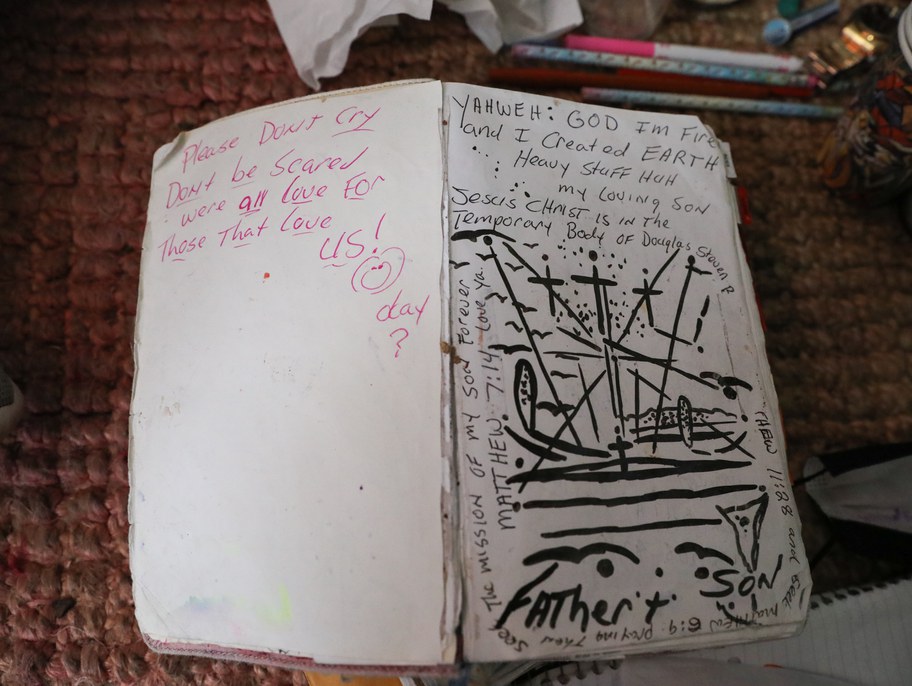 Here’s a look inside the journal of Doug Bue, who writes and draws a lot about religion. Photo by Zaydee Sanchez for KCRW.

Now, in the aftermath of Butler’s murder last week, LA County Supervisor Sheila Kuehl says she plans to move everyone living there into temporary or permanent housing in the next two to three months, in coordination with HOST, the Los Angeles Homeless Services Authority, and outside nonprofits.

“Almost all current residents of this encampment are already connected to a VA housing resource … and many are actively looking for an apartment,” Kuehl said in a statement. “But it’s clear we must accelerate the pace at which people are moved off the street. Further loss of life in this encampment is simply unacceptable.”

After the fatal stabbing of an unhoused military veteran outside the VA in Brentwood last week, county officials say they plan to move everyone at the camp into housing by...

All across the country, cities are investing in unarmed crisis response teams to de-escalate non-emergency mental health situations. The idea is to divert certain 911 calls...