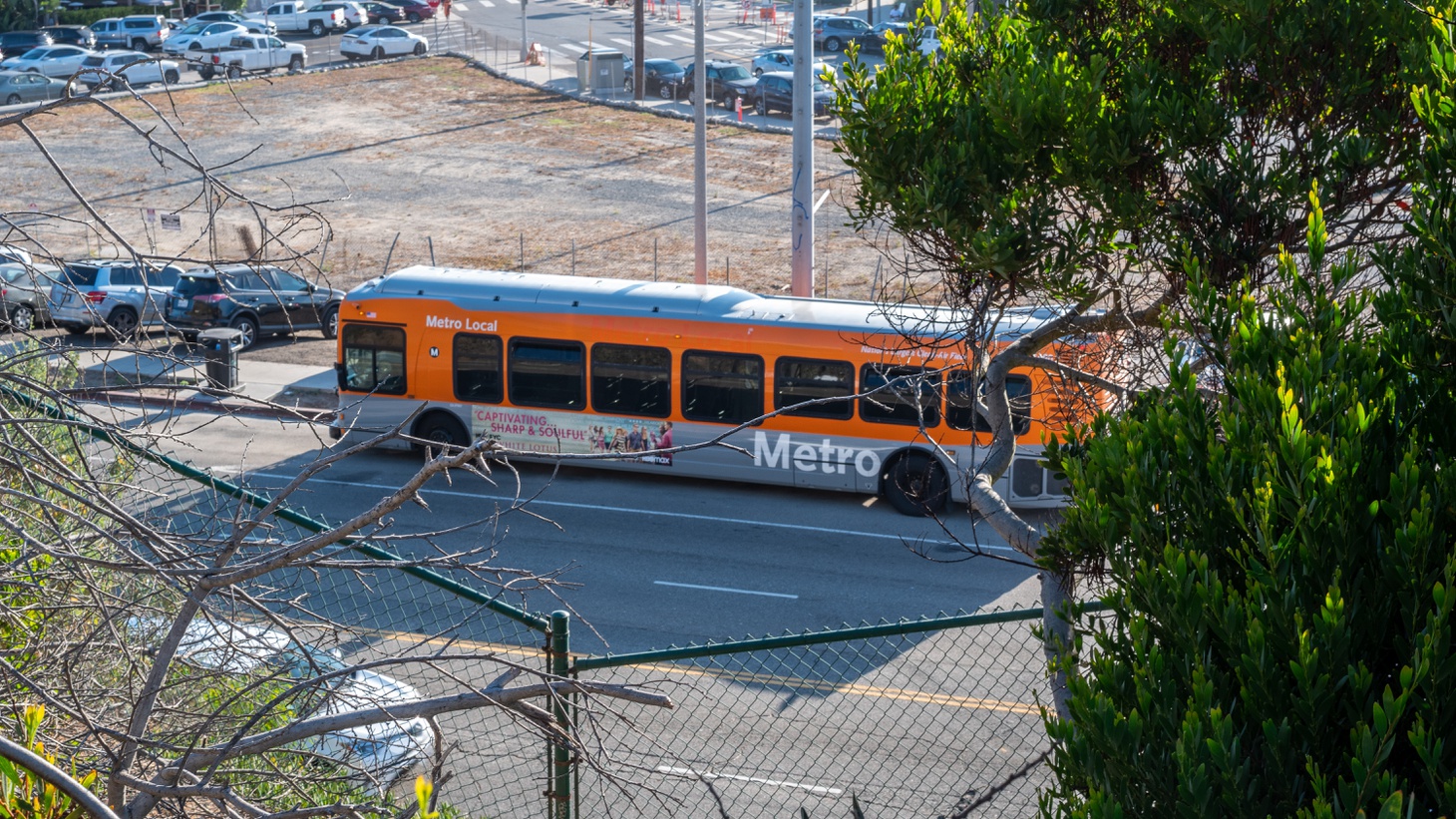 A Los Angeles Metro bus stops in Playa Del Rey, June 26, 2022. “I see people with guns, knife fights, people doing drugs. And you absolutely cannot say anything because otherwise, they get aggressive,” says Metro rider Mayra Rodriguez about her daily experience riding the system to work. Photo by Amy Ta.

As Andrew Ramirez waits for his train at the Hollywood and Western station, he’s got one thing on his mind: his own safety.

“Try and carry some protection on you. It’s better to have it and not need it, than need it and not have it,” he explains as he keeps an eye on his fellow riders.

“I stay strapped. I got a knife on me right now,” he admits hesitantly. “I know other people who have had to get like firearms … just because they don't feel safe.”

Reported violent crimes on the system are up by nearly 75% during the first four months of 2022 in comparison to 2021, according to LA Metro. Ridership has also dropped dramatically.

In response, the transit agency is launching a new pilot program that will put hundreds of so-called transit ambassadors on its routes. Up to 300 unarmed Metro advocates dressed in bright green t-shirts will ride on the trains and buses, or post up at rail stations and bus stops. They’ll help riders navigate the system and keep an eye on passengers and employees. They will work in pairs and coordinate with crisis intervention specialists. They’ll also collaborate with trained personnel who can administer narcan to reverse opioid overdoses. They’re not police and are expected to call the cops if necessary.

“They're trained not only in customer service, but public safety awareness, disability awareness, cultural sensitivity, and they're going to have a great knowledge of our Metro system,” says Monica Bolden, the senior executive of customer experience at LA Metro.

The ambassadors can also help ease riders’ fears. That includes Mayra Rodriguez, who takes two trains and a bus from her El Monte home to a restaurant job in Hollywood Monday through Friday. Her commute takes at least three hours, sometimes in the dark.

“I don’t have another option other than using Metro. It’s not that I want to do this,” she explains.

While Rodriguez has never been the direct victim of a crime, she’s seen a lot on the lines: “I see people with guns, knife fights, people doing drugs. And you absolutely cannot say anything because otherwise, they get aggressive,” she says.

Sexual harassment is also a constant threat for riders, including Koreatown resident Adriane Hoff. She recalls a 2018 incident when she was groped by a man on a Purple Line platform during rush hour.

“We were all in a big crowd to squeeze into the doors. And I felt something rub against my buttocks,” Hoff says. “I just assumed that it was just an accidental bump since we were all in such a big crowd.”

Hoff didn’t see the perpetrator touch her, but a fellow rider saw the exchange and intervened, preventing the groper from following her onto the train.

“Unfortunately, as a woman, this is going to happen in public spaces. But I was so grateful for that man who did something. He could have just kept on with his day and did nothing,” Hoff says.

“I don't tolerate violence on our system, period. And sexual harassment is zero tolerance. I feel for the rider because I understand that experience. And unfortunately, it happens way too much,” Wiggins says.

She adds that the transit ambassadors are a first step in showing, and not just telling, riders that LA Metro can keep its riders safe.

“We want people to allow us to demonstrate that, right? Part of restoring confidence and rebuilding trust is having a track record,” Wiggins says. “It's not that when we start the deployment of the ambassadors that we just announced … we go away. No. There will be accountability measures. There'll be information that we report out to our ridership.”

The $122 million program is based on a similar initiative from the Bay Area Rapid Transit System (BART). In 2021, violent crime on BART dropped by 36% in the year after its transit ambassador rollout. The agency credits the program for helping make that happen.

“By using an unarmed approach to just provide basic customer service, it’s a really great step in the right direction, to make sure that the people know that there's someone else there,” Brozen says.

Brozen is, however, concerned about the time of day ambassadors are active. LA Metro says they’ll work until 10 p.m. daily. She says that doesn’t include the time when riders feel the most unsafe — late at night. Moreover, Brozen questions whether 300 new employees are enough.

Metro says the program is a pilot only. So far, there are no plans to expand the scope.

*Correction 9/27/22: A previous version of this story incorrectly stated that the transit ambassadors will work until 8 p.m. on weekdays and 9 p.m. on weekends.