A year ago today, a helicopter crashed into a hillside in Calabasas, killing Los Angeles Laker Kobe Bryant and his 13-year-old daughter Gianna (aka Gigi), along with seven other people.

Lakers fans then embarked on a pilgrimage to his home court.

Jamal Womble was one of them. The 5’10,’’ 230-pound former running back was choked up and brought roses to honor Bryant.

“Kobe, man, he was different,” Womble said through tears. “His mentality, he was everything you want out of a competitor. He was the first athlete to die that I grew up with. I watched him my whole life. It’s tough, man.”

One year later, the basketball great’s legacy continues, from a Bryant-dedicated Lakers championship win in 2020 to his face smiling down from murals around town. 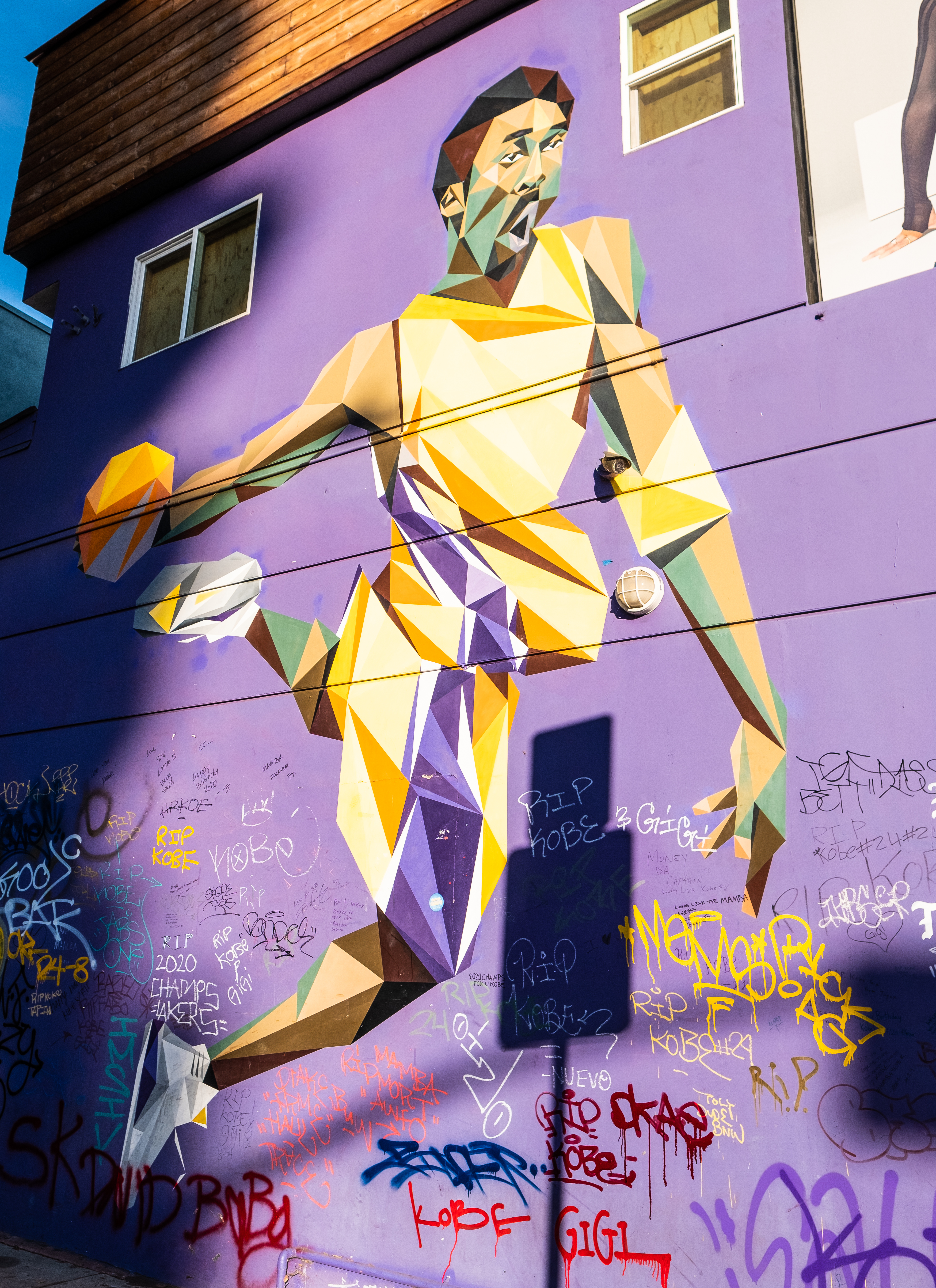 A mural of Kobe Bryant in the Melrose Arts District. Photo by Amy Ta.

Photographer Atiba Jefferson has shot Bryant (and his family) from rookie to retired superstar.

Jefferson has photographed other sports stars and pop culture figures for over 20 years and credits his work ethic to Bryant.

“We were both honing our craft at the same time,” Jefferson said. “I was able to see him grow up in front of my camera.”

Since Bryant’s passing, more than 250 murals representing him have cropped up in LA.

A mural of Bryant and his daughter, Gigi, on Pico Blvd & Centinela Ave in Sawtelle. Photo by Brian Hardzinski.

Muralist Louie Palsino, aka Sloe Motions, created the much-beloved piece called “City of Angels.” It spans an entire building and shows Bryant and Gigi, embracing as angels with wings and gold halos.

“Kobe was a hero to me and kind of like a father figure,” he said. “Just a good role model that I've never really had. … And if you were a Laker fan, you saw [Gigi] grow up in the press conferences with him. ... It struck me in the heart.”

Sloe Motions was paralyzed with grief this time last year. But then he thought, “What would the Black Mamba do?”

“I just put emotions to the side as much as I could and got busy,” he said.

Sloe Motions has 17 murals around town, which he sees people stop by, admire, and take pictures. He’s seen grown men cry, but most leave smiling.

“Being able to give people that emotion feels great,” he said. “I guess it softens the wound, you know, with the work I put out. Hopefully it does.”

Mike Asner, the founder of KobeMural.com, wants to connect more people with that feeling.

His website tracks over 400 Bryant murals worldwide, from Orange County to Kazakhstan, and publishes them on an interactive map.

“It's therapeutic for the fans to see these works of art and visit them,” Asner said. “It's therapy for the artist as well. And it's just as much therapy for me to do something to give back."

In the years to come, Sloe Motion expects the number of murals will grow.

“It's not over. I think he's living through all of us, through every single person he's ever inspired,” he said.

Kobe Bryant’s legacy lives on, from murals to youth leagues

A year ago today, a helicopter crashed into a hillside in Calabasas, killing Los Angeles Laker Kobe Bryant and his 13-year-old daughter Gianna (aka Gigi), along with seven...

Kobe Bryant and his 13-year-old daughter Gianna were going to her basketball game when their helicopter crashed one year ago today. The news was a gut punch for young...

LA Metro has more money than expected. Where should it go?

LA Metro is expecting almost $300 million more in revenue than it expected, thanks to sales tax money.