“For me, it doesn’t feel like summer ... without summer camps,” says 11-year-old Valentina Thomas at Skate Camp in Santa Barbara. Photo by Kathryn Barnes/KCRW.

At a skatepark in downtown Santa Barbara, adjacent to the ocean, a dozen masked crusaders wheel down a cement slope.

“I wanted to get over my irrational fear of ramps, and also, my mom said we had to get out of the house,” says 11-year old Sophia Imhof, who’s part of the first wave of kids at the City of Santa Barbara Parks and Recreation Department’s summer camp program this year. 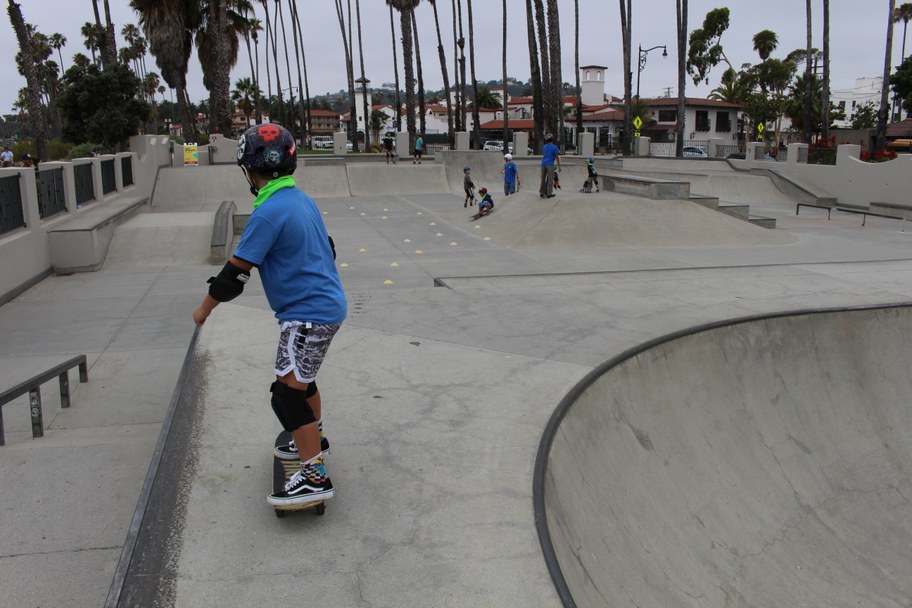 Camp sizes are limited this summer to adhere to social distancing restrictions. Photo by Kathryn Barnes/KCRW.

Many camps decided not to reopen this summer. Some went totally virtual. Others are going bankrupt. But camps that are able to meet outdoors, where public health officials say you’re less likely to contract the virus, are trying to make it work.

Down Cabrillo Boulevard at Nature Camp, Alex Saunders drops off his son, Connor. He says deciding whether or not to send him to camp is a debate every morning.

“On one hand, he's been unable to play with his friends and [is] literally locked inside with his parents for the past three months, which is the greatest torture you can think of. That being said, the increasing numbers are hugely concerning,” he says. “I just know what's best for him is probably going to camp. What's best for everyone else, including myself, I don't know.”

After drop off, Connor and several dozen other kids filter into a grassy field. They’re told to sit inside a colorful hula hoop, each spaced six feet apart, and start singing silly warm-up songs. 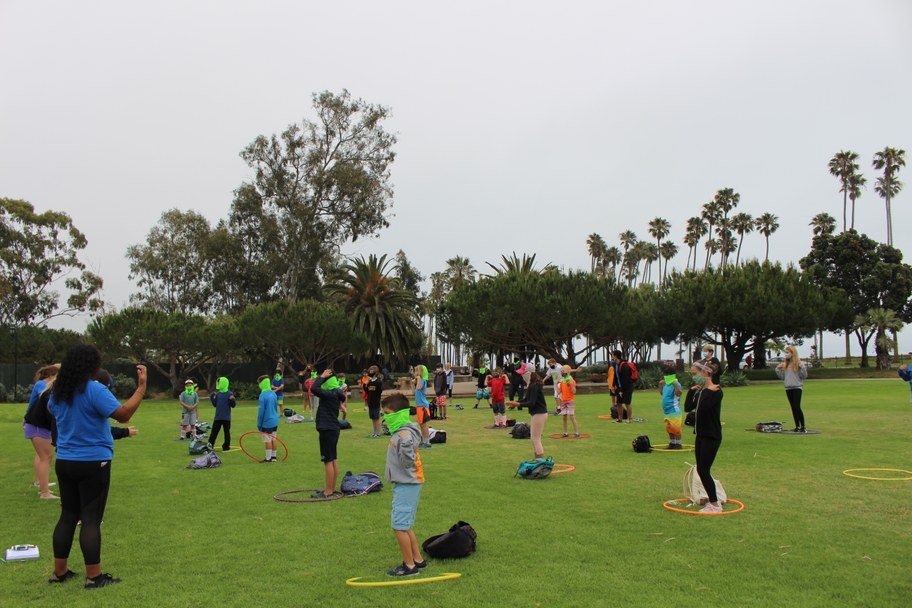 Kids at Nature Camp are told to stay inside a hula hoop, spaced six feet apart, during the morning sing-along. Photo by Kathryn Barnes/KCRW.

Then the campers are split off into their pods: groups of nine kids and one counselor.

“Each group is ‘a household,’ and so we can't let those households mix,” says Adam Porte, the camp’s supervisor. He says these pods make a big difference in preventing and tracing the spread of the coronavirus.

Nature Camp is usually filled with field trips to hiking trails, batting cages and parks. But this year, Porte says squishing 15 kids into a van is out of the question. They’re limiting the van capacity to five kids at a time — one in each row.

“We are asking the kids to wear their mask, if possible,” he says.

Everyone was given a lime green bandana on their first day of camp. Some kids are wearing it around their faces and noses, but most have dropped them down to their necks.

“It's definitely tough, but I think these kids have been really well conditioned already by their parents,” says Ponte. “They're really good at following directions. I think the kids all know the importance of safety.”

Talking to Sophia down the road at Skate Camp, she seems to understand the role kids play in how the coronavirus can spread.

That’s the fear among parents, counselors and city staff responsible for these camps. Will more kids playing close together lead to an uptick in cases, hospitalizations, and deaths?

“I'd like to think that we make it all the way through the summer with no incidents,” says Rich Hanna, the recreation manager for the Santa Barbara Parks and Recreation Department. “But every night, I'm watching the latest cases in Santa Barbara County. And every morning, I'm watching anything that's been updated.”

He says one parent, kid or counselor testing positive for COVID-19 could shut down a pod, or an entire camp, for the rest of the summer.

The Santa Barbara Parks and Rec Department is asking families and counselors to self-monitor their symptoms and avoid camp if they feel sick. It is also requiring parents to sign a waiver releasing the camps of any liability related to contracting the virus. 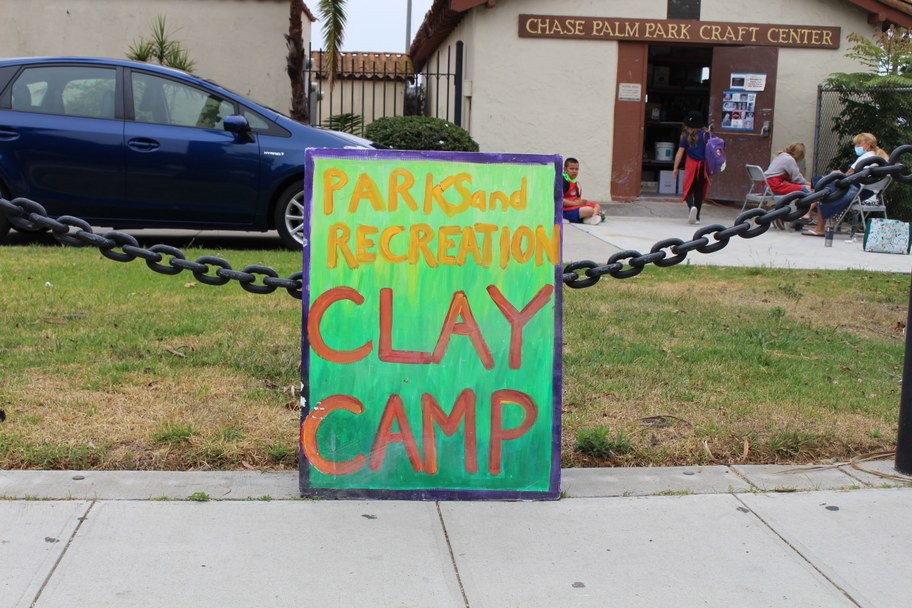 While most camps run by the City of Santa Barbara’s Parks and Recreation Department are held exclusively outdoors this summer, some camps, like Clay Camp, are being held in ventilated buildings. Photo by Kathryn Barnes/KCRW.

But some other camps in larger cities, like Los Angeles, are taking extra safety precautions.

At STAR Education, which is offering some in-person camps on LA’s Westside, campers must get their temperature checked twice every day. Counselors must submit a negative COVID-19 test before starting their assignment. 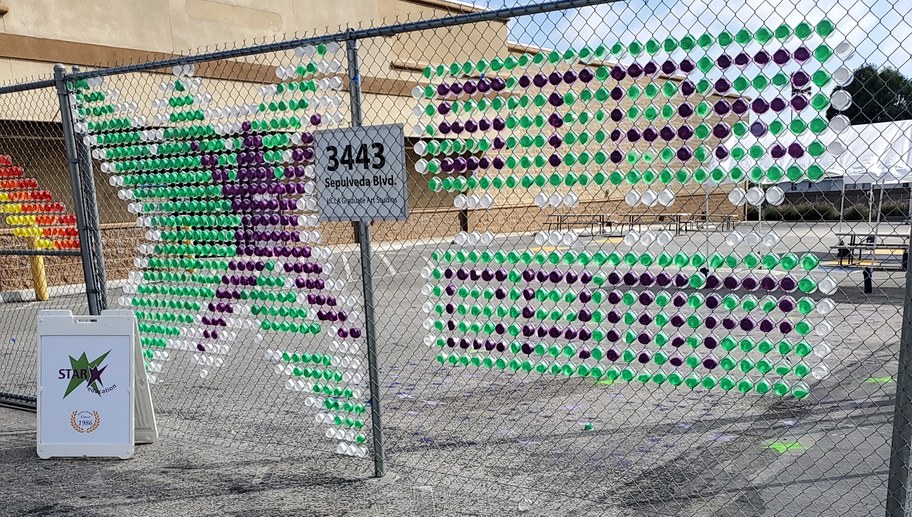 The front gate at STAR Education camp in LA. Photo by Sir Robinson.

Most of the time, the campers are doing outdoor activities. When the kids go inside, they’re separated from one another with six foot tall clear partitions.

“Basically the campers are in their own cubicle,” says Sir Robinson, the Director of Innovation for STAR. “It's definitely not ideal, but nothing about this summer is ideal. We're happy that we could offer anything at this point. A lot of our competitors weren't even able to do that.” 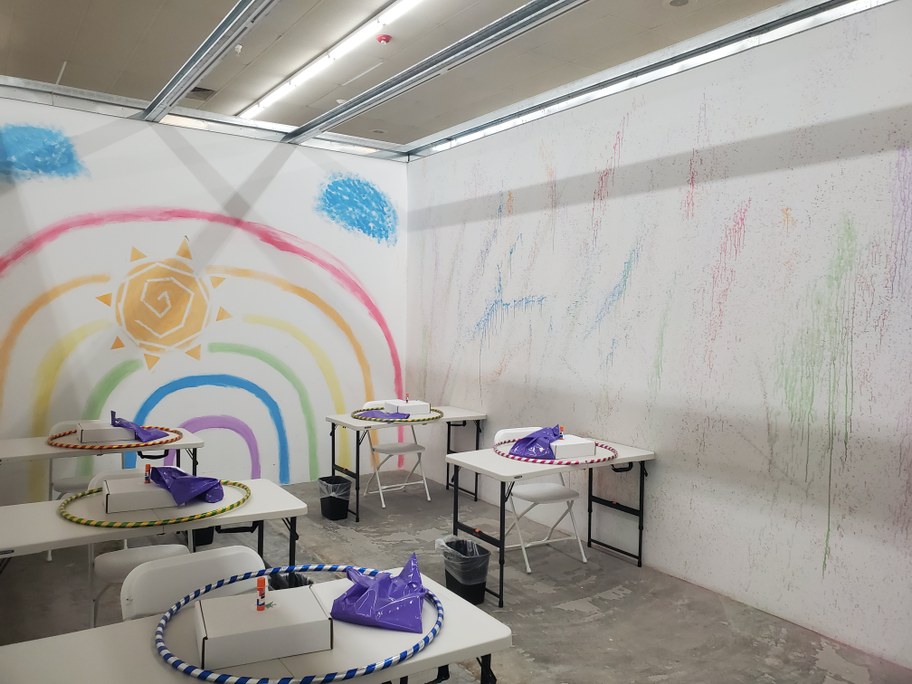 Robinson says summer camp is the first step in preparing kids for what they’ll experience if school resumes in-person this fall.

“This is a great time for the kids to get ready for that new normal in a few months.”

Back at Skate camp in Santa Barbara, 11-year-old Valentina Thomas says all of the added safety — masks, hand sanitizer, pods — is worth it if it means she gets to spend the summer making new friends.

“For me, it doesn’t feel like summer not having much interaction without your brother or parents around you, without the summer camps and stuff. That’s kind of what makes the summer for us,” she says.

As camp winds down for the day, Andrew Saunders is back to pick up his son. Now, he has to worry about how to get any potential germs off Connor before entering the house.

“The routine is come home, scrub everything, everything gets put away, everybody gets their hands washed,” he says. “We go about it, but I don't know if that's enough or not.”

Saunders wants to err on the side of caution, but he also doesn’t want to keep Connor locked up. Plus, Connor likes the silly songs, games, and new friends. It takes his mind off things. So tomorrow, at least, he’ll be heading back to camp.

At a skatepark in downtown Santa Barbara, adjacent to the ocean, a dozen masked crusaders wheel down a cement slope. “I wanted to get over my irrational fear of ramps,...

The Los Angeles Sheriff’s Department is the nation’s largest sheriff’s department, overseeing more than 150 unincorporated areas and more than 40 cities.